I played a game of FOG with my monthly club today. Zach and I took the Palmyrans and Tom and Chris had the Sassanid Persians.

The outcome was predictable: Palmyran forces in total disarray, Queen Zenobia fleeing for her life. Me, I blame a stupid mistake in the deployment of our forces. Never should have held those big heavy cataphracts in reserve...

However, there were some really amusing spots in the battle, such as my camelry (Unprotected, Poor, Undrilled, Bow, Swordsmen) holding out against a cataphract charge (with the Persian CinC!) and then three rounds of melee. Those horses really don't like camels. Can't wait to see Tom's 'camel-phracts'...

So, even though we lost, I had a really good time. I like playing with Zach, Tom and Chris (and the other gents at the club as well - they were involved in another game, Byzantines v. ??).
Posted by J Womack, Esq. at 11:10 PM 1 comment:

Today was my first day back at work. No students for another week, unless you count schedule pickup on Thursday evening. Bummer. Gaming-wise, the summer was a bit of a disappointment.
However, this evening was interesting. My friend Zach came over and we mucked about a bit with some Fields of Glory Ancients. He is considering a samurai army, and wnated to see how the troops did against various scenarios. So, using bases as counters, we sort of set up scenarios and ran through them. The bushi did well against Ancient Britons, both chariots and warriors. However, samurai cavalry got slaughtered by French Hundred Years War knights. The knights charged, the samurai died, and then it got really ugly in melee. Two turns to break the samurai. We plan on testing some more stuff out tomorrow night, especially the rules about charging into flanks when an enemy is already occupied to the front. 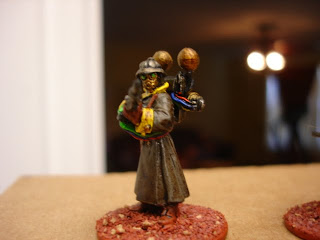 A Masked Minion Diabolical Weaponeer
I've been painting a bit the last week. I have finished totally five more 25mm Martian sepoys [RAFM] and the five Masked Minions Diabolical Weaponeers [Parroom Station]. I also finished some more 6mm terrain bits (more walls). I am almost done with the last three Eureka Prussian fliegerjager I have (need Dip, base and clear coat) and the five 25mm Martian artillery crew from Parroom Station. I am looking forward to receiving my scudder that I ordered from Brigade Games at Historicon in the near future, too. Hopefully in the next week or so - I should probably contact them to be sure of it. The shield gunners and archers are languishing at the moment. I need to hustle on those, the month is half gone! Plus some finishing touches on a bunch of 6mm Colonial/VSF stuff: 4 infantry stands, a gun stand, and the limber stand are almost done, and I have started the Martians (nee Mahdists). 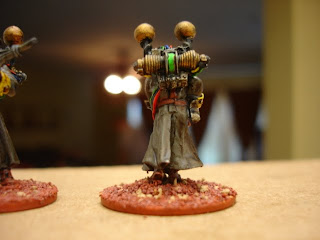 Greetings, all.
Making a bit of progress on the painting front this month. Which is nice, because, as I have mentioned previously, I've done darn near none all summer long.
I have the five diabolical weaponeers just about done with their base colors. Hopefully finish them up today, along with a late addition to the painting queue: three Eureka fliegerjaegers (the Pax Limpopo helicopter Prussians - you know the ones I mean). I've gotten most of the rest of the lot for this month cleaned up and primed, and a color scheme worked out for the shield gunners. Honestly, they are mostly waiting on me to clear a little space from my painting table.
Posted by J Womack, Esq. at 8:51 PM No comments:

Okay, so it has been a few months since I set any goals for painting. And guess what? Not much painting got done in those moths. You would think that the summer, what with me being a teacher and having the time off, would be a very productive season for me. You'd think wrong, but you would think it.
Anyway, I am getting ready for school to start back up and back into the swing of things. And my thoughts turn towards painting again. So here's what I want to accomplish this month:
That's quite a good bit. I'm feeling ambitious. We'll see how it is going in a week or so. One other thing, if any of you has an extra Battle for Macragge force field pylon or two laying about, I could surely use it. Please let me know and we can work out details.
Posted by J Womack, Esq. at 6:50 PM No comments: