Two posts in before the end of the month! Look at me go! I feel so much better after this second procedure, let me tell you...

So up today are a few of the soldiers for Frostgrave and a shot of the mausoleum graveyard terrain. 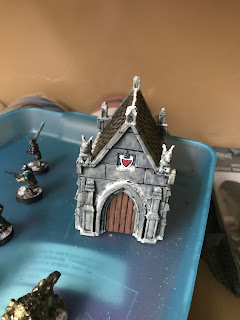 The Crypt.
I got it from a set of 3-D printed stuff on eBay. Price was very reasonable 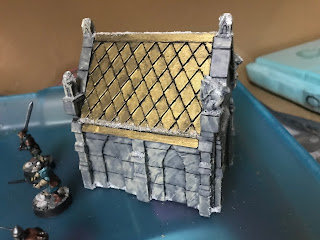 Bronze roof. I should probably have added verdigris - I may go back and do it at a later date. 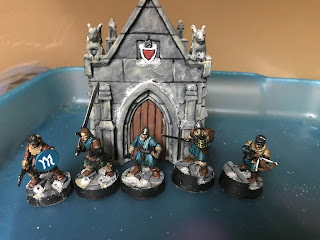 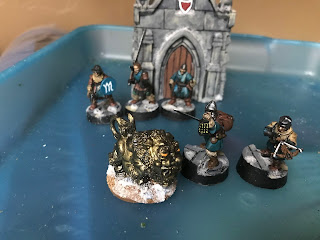 I also finished up one of a pair of Fu dogs. Theses will be living statue traps in Frostgrave
Bronze with a molten metal/orange eye effect.

I finally got a bit of work done on a bunch of little guys. I still have three stands (9 figures) to finish off, but that's just waiting for some glue to dry. These are all the plastic battle-suited infantry from the new box set 1 of OGRE Miniatures. I may eventually get another box set so that I can do stands of two or single figures to model attrition, but for now I plan to use casualty caps. I'd also like to get some to set up as Heavy Weapons squads, but I will need some sort of weapon for that...

I painted them up as members of a NeoSoviet Paneuropean Motor Rifle Division. They have GEV-PCs to go with them, and some armour in the form of Heavy Tanks and Mobile Howitzers. I think I have already posted photos of those. If not, I can always dig them out and snap a few.

I intentionally modeled each cluster of squads on different sorts of terrain, just for fun. The one group that hasn't been done is the urban set, because I was waiting for the glue to dry on the rubble. The hexes I used to base them are 1" across the flats, IIRC. I got them from Litko, 3mm thick. I use the same for most of the smaller vehicles. 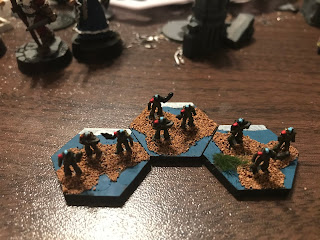 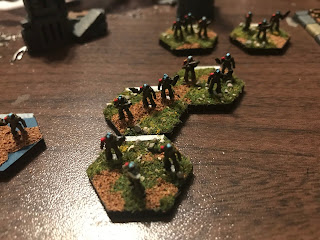 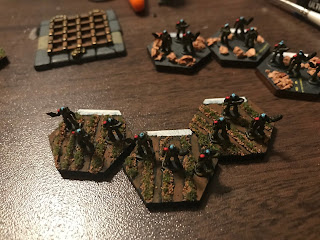 "Farm" I modeled little crop rows (3x3 bases)
Also, you can see a piece of Frostgrave terrain (the grate) 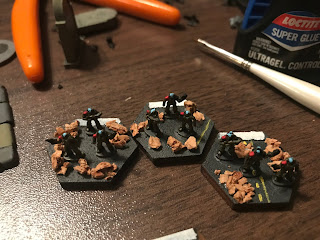 "Urban" (3x3 bases)
Once the glue dries on the rubble, a quick bit of paint on it and these nine will be done as well.

I left a bit of space in white on the backs of the bases to make notes like unit, Attack Strength, Range, Defense Strength, and Move. I will add those when my printer decides to act right again.

The rocks being stones in my kidney.

I've been in and out of hospital this month. Got two more trips ahead of me. So not much hobbying going on.