And now, to the loot! My younger son, who is a mini me, has begun DMing his own friends in D&D 5E, so I bought him a  ton of the prepaint minis and some dungeon tiles from Paizo. He also got some Starfinder stuff to help with that, including the hard to find Incident at Absalom Station adventure... but that's his toys, not mine. 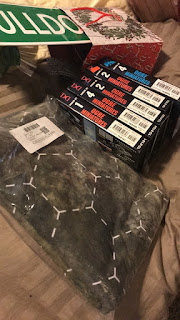 
I received several boxed sets for OGRE, as well as four singles of the Combine "Minotaur" Howitzer, and a Cigar Box Battle Mat marked in large hexes... That's three more OGREs and sundry smaller vehicles to help pad out the forces. 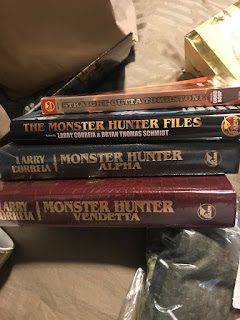 
I lost a lot of my books in the flooding of Harvey here in Houston. So my family is working on replacing them for me! Good family. I got several Larry Correia books, which are a lot of fun, and some David Eddings novels (the Belgariad, original editions in paperback, just like the ones I had before). My mom also pledged a custom "Book of the Month" for me - I just send her a title once a month and she orders it for me! Yay!

I also got an expansion for SmashUp, which brings me very close to having all of the factions for that wacky game. 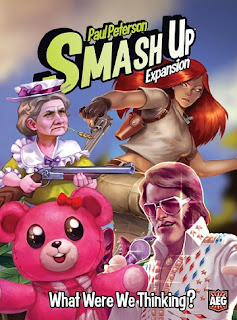