I picked up a set of the Games Workshop plastic terrain set, the Azyrite Ruins, for a really nice discount price ($12, including shipping), last summer. The idea was to use them to help begin my Frostgrave terrain at long last. So I finally got started on painting them up, and here are the first couple of pieces. 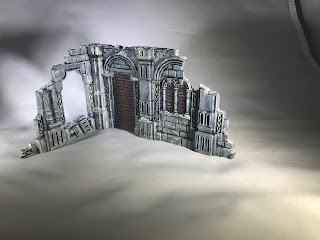 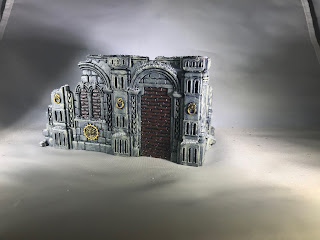 The other side. I don't know why the doorway and window are bricked up. 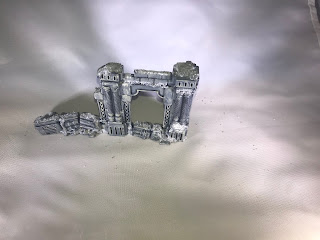 The second of the pieces. 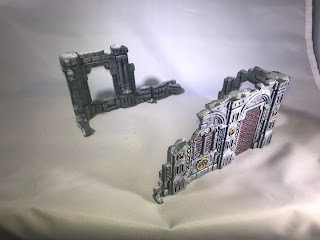 
I applied some GF9 snow to the pieces, but only sparingly. It's my first time using the stuff. It works alright, though. The terrain pieces themselves are a nice sturdy hard plastic material. They fit together pretty easily, too. Painting was relatively straightforward: flat black spraycan primer (I use Krylon for Plastic), paint in stones with Vallejo Basalt Grey, then dry-brush Vallejo Stone Grey over that. Bricks are just Vallejo Dark Red.
Posted by J Womack, Esq. at 1:00 AM 2 comments:

I've been sitting on these for years, and finally just got around to doing them! These are 1:285 scale (6mm) Light GEVs for OGRE Miniatures, manufactured by Ral Partha for Steve Jackson Games. This unit of seven is painted to tie in with the existing seven GEVs I already have painted (see last photo). Of course, when I took the comparison photo, I realized I had forgotten to add the decals to the LGEVs! So I will have to go back and do that. But otherwise, these are finished. 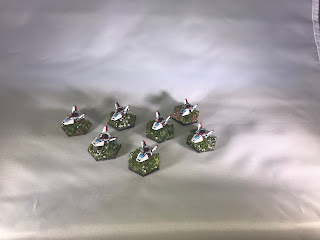 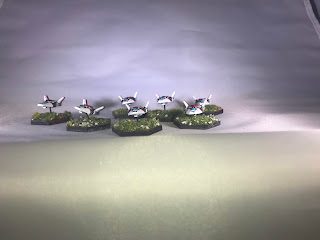 I really did mean to put them at varying heights and angles.
No, really. I did. I thought it made them look more like highly maneuverable
light armoured units. 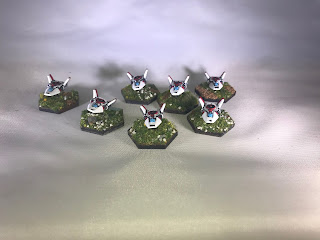 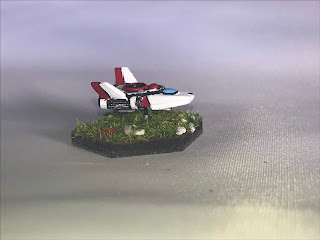 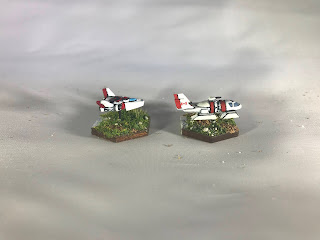 LGEV with his big brother, the "Raptor" GEV

A bit of AA for FOW

And today we have some photos of recently finished toy soldiers! These are all Battlefront Miniatures figures, for the Flames of War (v4) game. Of course, they can be used in any 15mm World War 2 game. But that's what they are for.

Also, I am using my new pop-up photo box for the first time with these pictures. I don't know if it's a LOT better, but I think they are at least improved somewhat. Still just using my iPhone for the camera, since the old Sony died a year or so back. 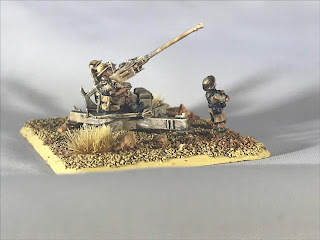 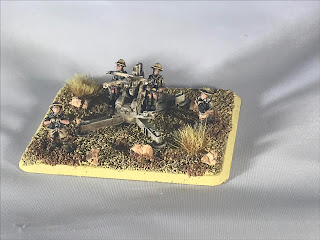 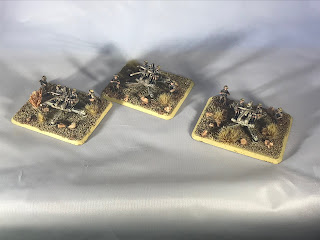 The full battery of three guns. A nasty surprise for any lurking Stukas! 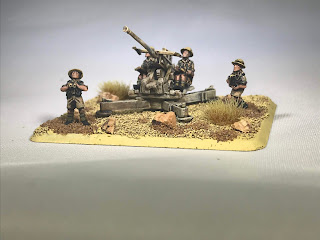 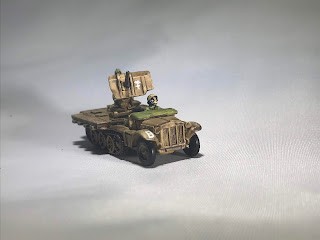 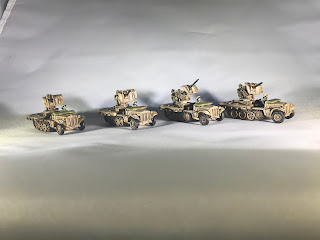 A platoon of four will help protect all those lovely Panzers
from nasty British Hurricanes.

The Colonel has returned ot his model building ways, at long last.

This fellow's models are simply mind boggling. And after a 3 1/2 year hiatus, he's back at it again!

Just a sample of what he's up to now, in order to get you hungry for more... 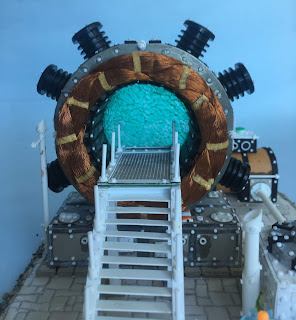 So, it's early days in 2019. I suppose that means it's time to take a brief look back at last year's gaming activities. It's also time to start considering the viability of this blog. I mean, really, does anyone blog anymore? Certainly not like the heady days of the early 2010s. I know I don't post nearly as often as I once did. It's not even that I am not doing things game related, because I am. But most of my social media/internet outlet is Twitter now. I'm going to have to have a serious think about the future of this blog.

I did quite well on the Pledge in 2018, I think. I painted more minis than I received, and that's a good thing! But for next year, I think I am going to modify how I track things again. Basically, I'm adding a category of Artillery between Vehicles and Miniatures. I might add a Cavalry row as well. I don't plan on doing much if any, because - and you already know this if you've been following me for a bit - I hate painting horses. But I have always been torn between calling a cannon a vehicle or a miniature. They're neither fish, nor fowl, nor good red meat, as the saying goes. So we will see how it goes.

I was silent on the painting front in December. Never picked up a brush. Which I hate but there it is.

I did get to play a few games in the month though, and that's good. Finished off the last few nights playing Ticket to Ride Europe and Machi Koro with the family while we were away on a short trip to New Orleans. Yep, that's our party animal nightlife lifestyle.

I will say that I played a nice variety of games this year as well. Several first time experiences, a variety of boardgames, roleplaying games, and miniature wargames. All in all, I am pretty happy with that.

I didn't receive many minis for Christmas this year (okay, I got a few!) but I did get some terrain, rulebooks, etc. for both minis games and RPGs. Overall happy with it.

I guess that's the theme for 2018: from a gaming standpoint, overall, I am happy with it.

I'm hoping to release a few products on DriveThruRPG this year. I haven't really talked about it much but I started a game company early in 2018. With one thing and another, we've been severely delayed in actually producing anything. I'm hoping to rectify that in the next month or two.

I suppose that's about all for now. I hope you all had a good year last year and I really hope that your 2019 is even better, no matter what point you're starting from.