A Rare Victory at Glucken Ridge

I played a game of Team Yankee a few weeks ago with my friends at this local club called Board and Brew. I say "local" but it's a good 30 miles from my house, forty five minutes with traffic on a good day. Anyway, it's a pretty good place with plenty of tables and they have beer. So its good.

I played a fellow I have known for several years but rarely get to see, named Anthony. I was his first opponent ever in Flames of War. He plays Italians, I play Indian Army British. Anyway, in this game, I played a Czech Force with Soviet allies and he ran an American force. 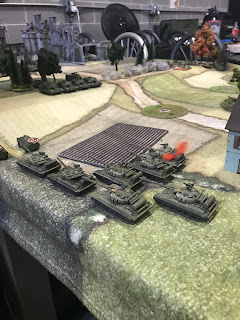 Soviet T-64s advance on the left flank - daring the Yankees in their flashy M1s to attempt to do something about it. One Hero of the Soviet Union is made. 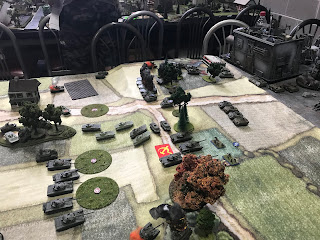 Minefields slow the Czech armoured advance, but a few turns of rocket artillery have softened up the American infantry defenders and the T-72M assault drives them from their foxholes. 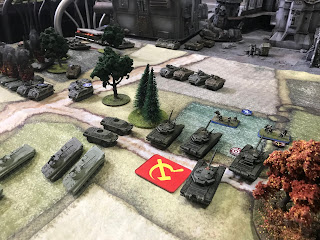 All of my scouts are killed. Because I stupided. And my infantry never disembarked.
Beyond the trees in the background to the left, T-64s keep reinforcing M1s occupied. 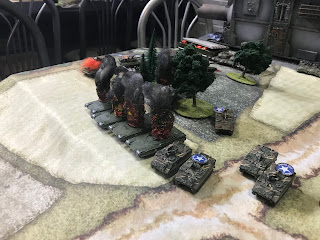 Burning platoon of M1 Abrams. A sight sure to please any Warsaw Pact player.
In fact, I got very lucky and took them all out in one turn.

In the end, I won by pushing the American infantry off the objective. The Americans did destroy enough of my units to make it a 5-2 victory rather than a 6-1 overwhelming victory. But I will take it! Anthony was a great sport about it all and a lot of fun to take on as an opponent.
Posted by J Womack, Esq. at 1:31 AM No comments:

Here are the images of the larger monster-type miniatures I mentioned previously. I finally got around to loading the photos up on the computer and now sharing them with you all. All of these figures are Reaper Bones. The giants came with the Kickstarter; the worms I bought at MillenniumCon in November 2017. 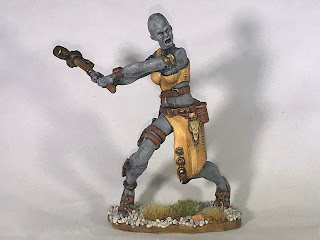 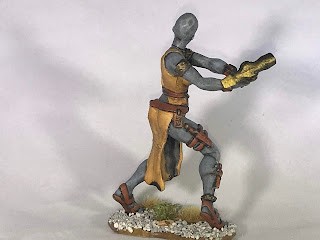 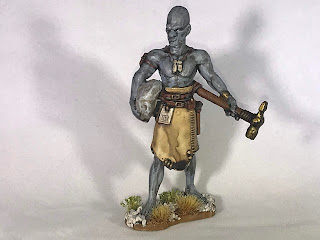 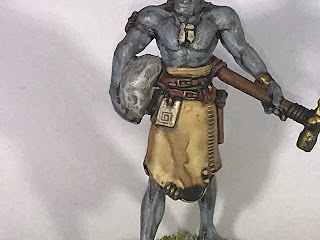 Closeup of ivory plaque and boulder 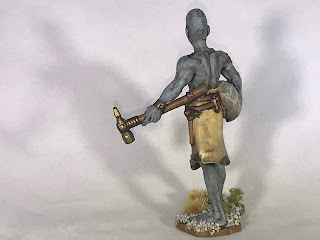 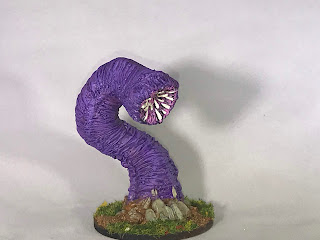 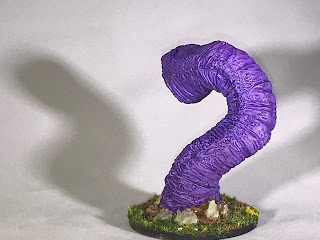 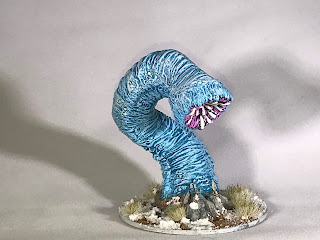 Same worm, painted for Frostgrave as an Ice Worm 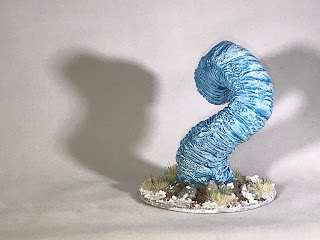 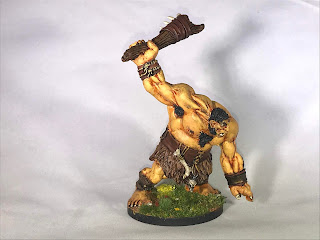 Hill Giant
I am particularly happy with his skin tones. 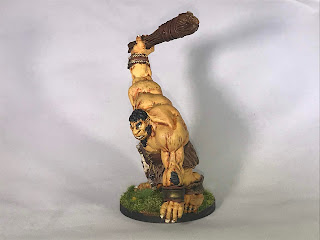 Heck, I even painted in his eyes.

I haven't done a lot of painting this past month, because of other projects (more on that later), but I did finish a few things a week or so back that I haven't shared, so... here they are, I suppose. 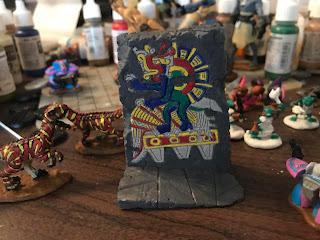 WIP Shot of a piece of jungle terrain. Also the Velociraptors 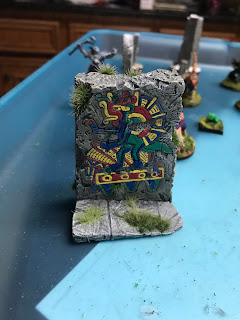 And the finished piece. I quite like the weathered detailing that was sculpted on it.
This piece is from Fenris Games, along with some of the other bits of stonework in this post. 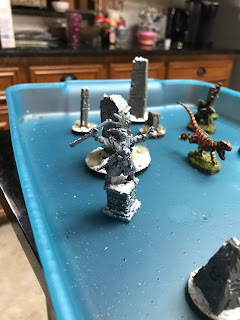 Terrain for Frostgrave
The statue is a Bones mini of Ezren, the Iconic Wizard from Pathfinder.
The plinth is from Fenris Games.
Just painted in my usual stone method and added some Valhallan Blizzard.
(That stuff is the bomb. I need more pots to save for when GW inevitably discontinues it). 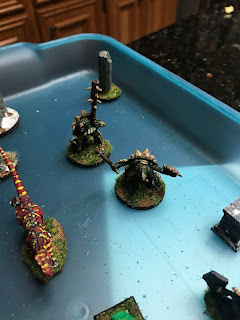 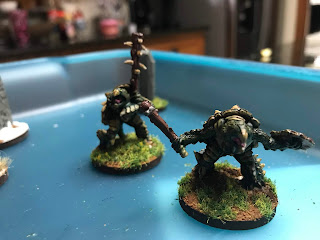 Closeup of the Spike shells, really ought to take better photos. 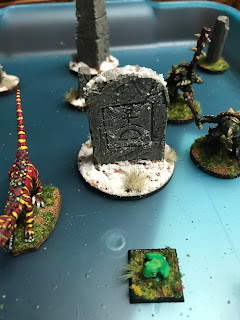 Another runestone from Fenris, and the ancient Toad from Talisman.
I've had this mini for probably 20 years, maybe longer. Finally just did it.

I have some big pieces that I finished this week that I will take proper photos of and post later this week. Maybe. You'll know why I have been so distracted soon, I promise.
Posted by J Womack, Esq. at 11:11 AM 2 comments:

A few shots of some of the things on the paint table right now. The giant mammoth man is from the Reaper Bones IV Kickstarter. The Van Saar gangers are from the boxed set by GW. The Pathfinder Goblin pyromaniacs are also Reaper Bones but not from the Kickstarter. 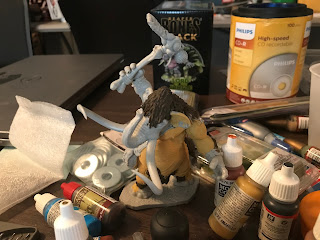 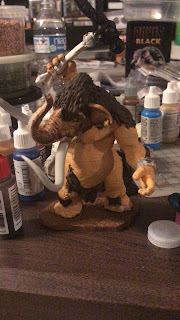 Still a good ways from finished.
Not really happy with the wash I chose so I am going to go back and redo that bit.
Plan to do the tusks last. 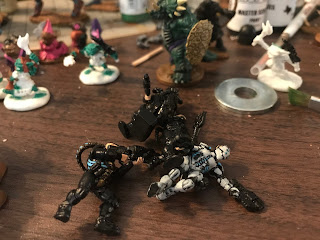 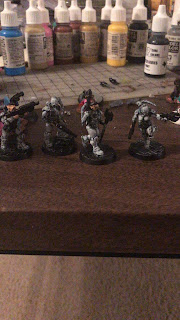 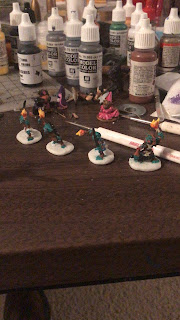 Working on these not-really-all-that-little guys I realize how bad my eyes are getting.
A bit sad about that. Oh well, that's why I have a magnifier visor I guess.