Today was a really busy game day for me.  I attended a sort of mini-convention near my home. My buddy Zach went along and we spent the day playing a variety of games - more games combined in one day than I've played so far this year.

First up was an Infinity demo. Zach is quite keen on this game, having played in one other demo previously. I took a small Nomad force and he took a PanOceania force. The terrain was pretty heavy - something I understand is pretty important for the game. I ended up winning by eliminating three of his four troopers at the cost of two of my own. We kept to just the basics, but it seems like a fun game. I'll have to talk him into buying some terrain. Maybe if I offer to paint it for him... Anyway, thanks to Duncan and Curtis for helping put this together. 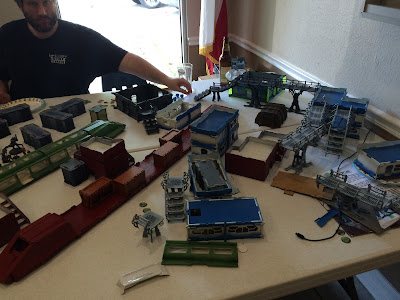 Next we played a couple of games of Zombicide: Black Plague, which is the medieval fantasy themed version of Zombicide. The first game ended rather abruptly as our victory conditions required that all six of the survivors (players) had to exit the board through a particular space. One of the survivors was killed, ending the game for us. We re-played the same scenario a second time (the fifth scenario "The Commandery," if you are familiar with it). We succeeded this time, despite one player doing exactly the same thing he had done in the first game that led to his demise the first time around! 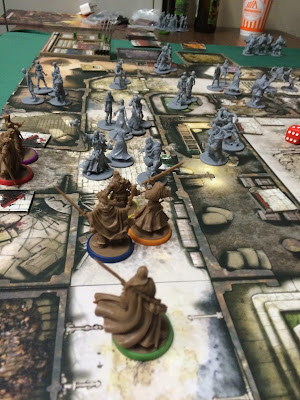 Hordes of zeds headed our way in Zombicide: Black Plague.


After that I went and played a few games of King of Tokyo. This is a fun, relatively quick game that combines kaiju monsters, Yahtzee-like dice rolling, power-up cards, and 'king of the hill.' I lost the first game, but won the second on Victory Points. Judicious use of a power-up card (Wings) kept me from being eliminated by some pretty heavy attacks.

The last game in which I participated was a weird little card game called Exploding Kittens. Essentially, you don't want to draw an Exploding Kitten card. If you do, you're out. Last man standing wins. You play cards to make other people draw cards, avoid having to draw them yourself, steal a card from their hand, and so on. It's alright, but maybe a little odd in terms of art and card titles and such for me.
Posted by J Womack, Esq. at 9:30 PM 2 comments:

Summer in the UK

My family and I will be returning to the UK again this summer. Booked airfare last night. Our itnerary is less focused than usual, as yet.

We will be in London on July 11-12. My son has a tour of a college campus (University of East London) that he is interested in attending.

We will be in Edinburgh from the 13-17 July. After that, Momma heads back to the US and the boys and I go... somewhere. Considering a day or two in Weymouth again, as it was lovely, and I'd like to see the Goddards again and stay in that lovely little hotel from last time. The owners were wonderful.

Also considering a visit to northern cities. Any suggestions? We will be there another week.

Finally, I would love to meet any gamers in the areas in which we visit. Just give a shout!
Posted by J Womack, Esq. at 10:12 AM 4 comments: