A Game of Thrones

So, I read all the books for years, finally got the last one back in August. Can't wait for the next one. And this week, I broke down and bought the DVD set for the first season of HBO's treatment of the books.
All in all, I like them. A bit too raunchy for my taste at times - I know, the books are just as bad in some ways, but then, my sons don't want to read over my shoulder. I find myself having to wait until they are in bed or otherwise occupied before I can watch an episode. Rather a pain. Such is the price of parenting, I suppose.
I do wish more parents considered what their children watch. My students (13-14 year olds) think I am the meanest dad in the world because I won't let my sons watch garbage like the Saw movies. I don't mind them seeing violence in a battle scene or something like that, but the sick and twisted mindgames of a show like Saw - and I haven't seen it either, but know enough of the concept to think it is not worth my time - I just don't want my kids to watch. They are 13 and 16. They know that sick people are out in the world. I just don't think they need to watch someone's twisted sadistic fantasies played out on film.
Actually, I just wish more parents realized that 'parent' is a verb as well as a noun. That is, it is an action, not just a title. The world would be a better place for it.
/soapbox
I'll wrapup my monthly goals tomorrow, once I get my homework done. Look for next month's goals on Sunday. Say good night to the nice people, Gracie.
Posted by J Womack, Esq. at 12:06 AM No comments:

Coming into the final week of the month, and things are not looking good for the finish line. Here's where I am at so far...
So that's where I am, with only 4 days to go, and most of them weekdays.
Posted by J Womack, Esq. at 3:28 PM No comments: 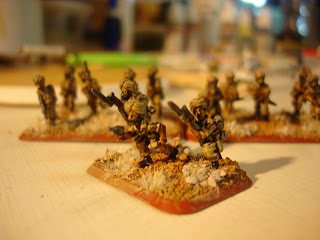 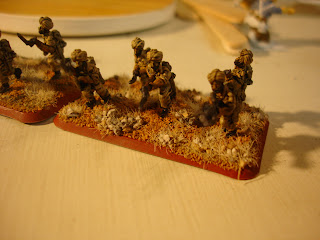 Sepoys of No. 1 Section
So I have the first FOW rifle squad done, and the platoon command stand. Work is progressing on the mortar and ATR teams, as well as No. 2 Section. One thing that I know is not accurate, but I don't have the time or desire to fix, is that I have mixed Sikhs, Punjabis and other "martial races" in the same unit. So I will acknowledge here and now that it isn't 100% accurate. I can live with it.

The figures are from Battlefront.
Posted by J Womack, Esq. at 11:35 PM No comments:

Half way through the month, and not a single project finished. I would be more discouraged, but honestly I have been too worried about the memsahib here at the Clinic for the last week. I am only posting notices here and elsewhere as a distraction while I sit here and stress out about her. See how well that's working?
Looks like I have a lot of work ahead of me for this month, and only two more weekends!
Posted by J Womack, Esq. at 12:31 PM No comments:

[Repost!] Have You Ever Noticed...

...that when you are away from your paints, minis, scalpels, bits, et cetera, you really, really get inspired to work on something? This is happening to me in a big way here in Minnesota. And blast it all, I have nothing to work with! And somehow, I don't think the memsahib is going to take it too kindly if I suggest a field trip to the arts and crafts and dollar stores to start a new kitbash.


But the Colonel and Dampfpanzerwagon's latest scratchbuilds have my juices flowing. I want to work on something! AAAARRRRGGGGHHHH!!!!!

I SEE LEAD PEOPLE: When Is A Ninja Loud?

I SEE LEAD PEOPLE: When Is A Ninja Loud?: When he is me! As of now Loud Ninja Games is officially a go.  What is LNG?  LNG is my new boutique-scale gaming company focused on, but...
Posted by J Womack, Esq. at 10:54 PM No comments: 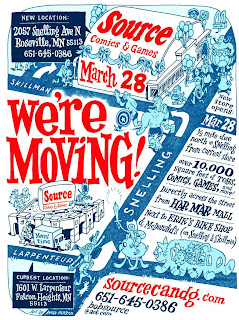 While my wife and I are up in the Minneapolis-Saint Paul region, I talked her into letting me swing by a game store that had been recommended to me by people on The Miniatures Page. Now, they are moving in a week or so, to a larger location. This will bring them from 6,000 sf to 10,000 sf of retial and game table goodness.
Over all, I thought this was one of the best game stores I have been in for a long time. It reminds me a lot of Great Hall Games in Austin, TX, with the addition of a really good comic store. Plenty of game tables, lots of terrain for use, snacks available in store. Tons of minis, rules and everything else you generally need for minis wargaming. Lots of RPGs as well.
The staff was very friendly. We talked about gaming and the various popular games in the area, how the gaming was in Houston, etc. I was even invited to play in the historical games they are having tonight, but I couldn't make it. I only ended up buying an Osprey that I needed for my FOW project (did I mention they have a LOT of Ospreys?) and a couple of bottles of Vallejo, since we are flying back home in a few days and I needed to keep it light.
If we ever have to come back to Mayo CLinic, I will be sure to stop by there again.
Posted by J Womack, Esq. at 5:06 PM 2 comments:

[Repost from Victoria's Boys in Red]

I have always had trouble with sknitones. While searching about on TMP, I found a reference to this article on the subject from Cool Mini or Not (CMON). It covers a wide variety with Vallejo paint references.

I haven't used it yet, but I am ordering some paints to give the suggestions a shot.
Posted by J Womack, Esq. at 2:42 PM 2 comments:

Yup, they tossed me into the hoosegow over on TMP for five days. Honestly, I didn't think what I said was such a biggie, but someone must have complained. But that is true of the last time I got sin binned, too, for cracking a joke about the French. Must have offended a frog eating surrender monkey that time.

I should, perhaps, have known better than to wrestle with the pig. Ah well.
Posted by J Womack, Esq. at 4:11 PM 2 comments:

St. Daffyd's Cross
Caernarfon -- Today is March 1, the Feast of Saint Daffyd. Interim President Lewis, with the approval of the Welsh National Congress and the Anglican Bishops' Conference of Wales, has proclaimed the day henceforth to be a national holiday, with all government offices closed. Regular government services will be resumed tomorrow. Sadly, our armed forces will not be able to join their families on this celebratory day, as they must maintain their vigilant stance against the thugs in service to Moseby and the English monarch. It would be just like the Fascists to profane a holy day with a sneak attack against our sovereign nation.﻿
Posted by J Womack, Esq. at 9:45 AM 2 comments:

So, first day of the month, time to get my goals set.

Again, this may not seem like much, but I will be leaving town and going to Minnesota for one week in March, and none of my painting supplies will be traveling with me. So, taking a week out of it, plus time for grad school, grading student papers, and the occassional few minutes of sleep here and there, and I think I will be pretty satisfied with achieving these baby step goals.
Posted by J Womack, Esq. at 9:16 AM No comments: