I have placed several orders over the years with Battlefront directly. Usually this is for items I just can't get in my local game store or that must be ordered directly from them. I've even had two occasions where I had a problem with a product I purchased that needed to be resolved. Once upon a time, that was a fairly easy process. No longer.

I have written before about my problems with the Battlefront resin Amtracs. (see here) There never was a resolution to the problem, because, well, they had nothing better to send to me.

Now my problem is in their direct orders. I placed an order back in October of 2017 that included a can of DAK Sand spray paint for my FOW Afrika Korps army I was buying. They held the entire order up for that one can of paint. Without telling me. I finally called them in January to ask about my order, and found out what was happening. The person I spoke to offered to send me the rest of my order and then send the paint along afterwards, if I would pay for shipping. I said no. This was about $150 order. They then offered to eat the shipping on the paint and sent the rest of the order to me. For the record, I never received the paint (nor was I ever charged for it, to be fair). 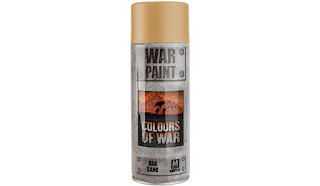 The second order I placed directly with them was at the end of March 2018. This was for Team Yankee stuff, things that you could only order direct from Battlefront (a tank sprue, the aircon units, the extra floor for the factory, and the billboards). Again, no word for months, just the order held up. I emailed them last week. And again, the hold up is a single item, the extra floor. No contact, just wait for it. I again got them to send the rest of the order (still hasn't arrived) except for the backordered piece. Which, in a separate email, they confirmed would be another 4-6 weeks from receiving in their warehouse. I also cancelled the paint can order at this time.

This is just bad service, period. I've decided that if I have to order directly from Battlefront to get something, I don't need it that badly.
Posted by J Womack, Esq. at 11:54 AM 2 comments:

Last Wednesday I went up to the north side of town - that's a 90 minute drive if you're not familiar with Houston's size and traffic - to play a game of Team Yankee with my newly painted Soviet T-64 Battalion. I still had to borrow a few bits, but my T-64s and my infantry were on the battlefield for the first time! My friend Jim ran his East Germans alongside me, a BTR-60 Panzergrenadier company with T-55s in support.

And we won! The Warsaw Pact forces held the objective strongly with a weakened  American Marine infantry force trying to take it away. This was unlikely to succeed in the face of an overwhelming number of East German and Soviet infantry stands, already dug in, and with supporting fire power from their BMP and BTR transports. We called the game for time, at a 4-3 victory for the Soviets (we had lost three platoons of tanks and one of ZSU-23-4 Shilkas). 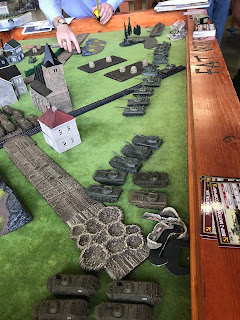 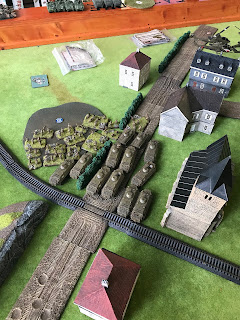 Using Spearhead special ability, the East Germans deploy into woods overlooking the objective. In turn one, they will move to cover it. Unfortunately, in their hurry to the front, they forgot their shovels and it wasn't until turn four that they finally dug in. 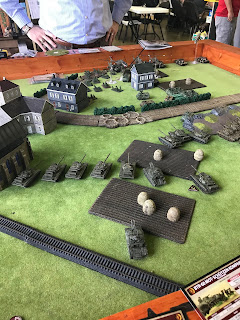 T-64s advance into contact. Cowardly American Dragon missiles are hiding behind the hedgeline there. They would survive the battle, the T-64s did not. 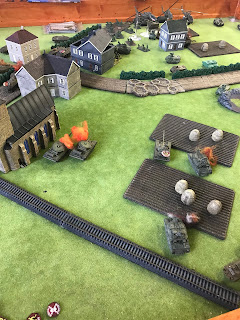 With two of their tanks burning, and one bailed out, the remaining T-64 abandons the battlefield. His bailed out comrade joins him in cowardly flight. Subordination by Yankee agents is suspected. The battalion political officer will be having a short discussion with those tank commanders, and a demonstration of Morale Rule Makarov. 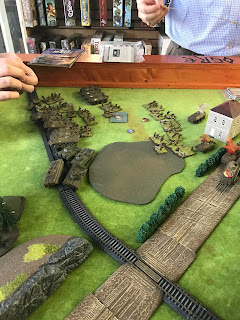 Lots of WarPac parked on the objective. My BMP-2s have not dismounted their infantry yet.

Before fleeing, my T-64s did manage to take an upgraded Abrams tanks out of the game. It should have been all three, but... my dice did what my dice do, and that is fail me miserably when shooting, and our opponent, Bryce, made a lucky Morale save when I had his second tank bailed out. The second platoon died to a tank, earning a (posthumous) Hero of the Soviet Union for the platoon commander.
Posted by J Womack, Esq. at 11:42 AM No comments:

It's hard to believe it, but I am actually ahead on my figure count. Not on my vehicles, but I will start really working on that soon, with my OGRE miniatures. What has really made the difference is finishing off an entire Soviet Motor Rifle Company of infantry, including support weapons. 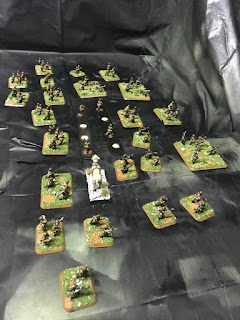 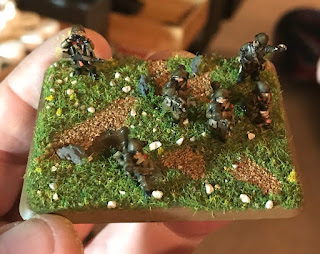 I have almost finished the first five T-64s as well. I will probably end up with about 12 or 15 of these in the end. 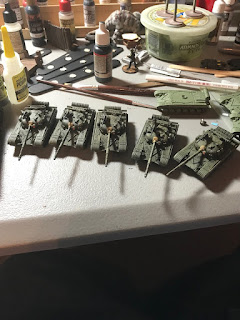 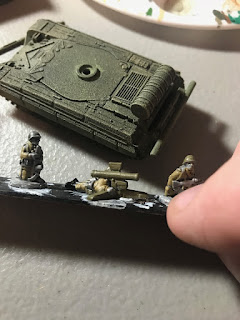 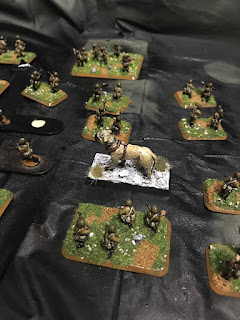 This time around, it's a bunch of Osprey Men At Arms series books for Napoleonic Wars. Sixteen of them to be precise. So that's pretty great. 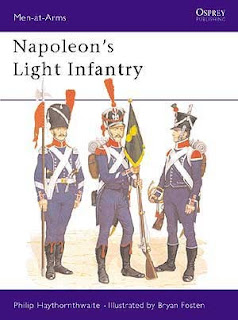 This is one of them.

I also found a couple of wooden bookcase editions of boardgames. Stratego and Clue. And that's pretty nice too. But I still haven't located my copy of Arkham Horror or the supplements that went with it. And I have noticed some odd gaps in my minis collection. For example, I have one Matilda II, where I should have three. And one of my Valentine IIs is missing. And four (!) of my Honeys, as well as both of the M3 Stuarts I painted for my USMC force. I am hoping I forgot them at a friend's house a while back... because if not, it means I left them at a game store over a year ago. They're gone if that's the case.
Posted by J Womack, Esq. at 7:17 PM No comments: