Even though I do not buy many of their miniatures﻿ currently, I think that Reaper is putting out some very good stuff. While bouncing around their website this afternoon, I found these, and thought I would share. 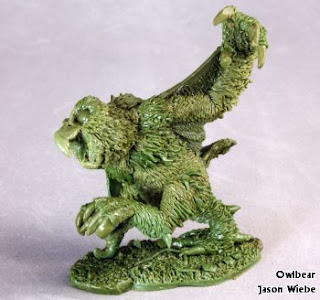 Talk about dynamic posing?!?! My PCs don't often come across owlbears, but if you like them (and I do!), I haven't seen one any better than this one. 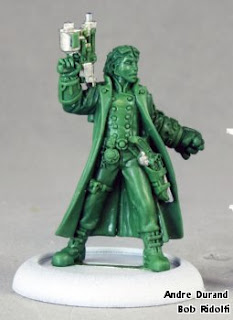 I can't decide about this one. Is he really Victorian Sci-Fi ("steampunk" if you prefer)? He may be an alternate timeline, but I am thinking too modernist for VSF. Nice fig, though. Kind of makes me think of Captain Mal Reynolds. 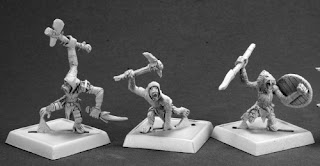 These fellows remind me of the little gliding monkeys in X1: The Isle of Dread. Phanatons, that's it. Except for the totla lack of a gliding membrane. So maybe not so much. But swarms of them would be fun. I am thinking they might pop up on Venus in my VSF games, eventually. I have got to get done with the lizards and parrotmen and Mushroom men first. 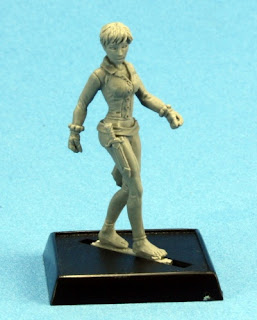 This figure just screams "archetype of thief, human, female". Pardon me, not thief: rogue. Remember your terminology, James.
That's all for right now. Need to make some dinner for the family and the girlfriend (s?).
﻿
Posted by J Womack, Esq. at 5:50 PM No comments:

I usually don't get a lot of game stuff for Christmas. The reason for this is that my hobby tends to confuse most of the family, and my wife never knows "what you want the most."
This year, I received the following:
That's pretty much it, from a gaming standpoint. I am hoping to pick up a few minis this week with some Christmas money, but not too much going down in that regard.
I hope everyone else got some gaming goodies too. Let us know!
Posted by J Womack, Esq. at 11:14 AM No comments:

First and foremost today, a big thanks to all the veterans of the united States who fought in the Second World War, which began for the US 70 years ago today. Yes, I know we were late to the party, but at least we brought enough party favors for everyone when we did arrive.
Anyway, I finally got around to dragging the camera out and snapping a few shots of my in progress VBCW forces. If you recall, I am making a Free Welsh Republic force. First up is the unit of schoolboys I have shown previously. 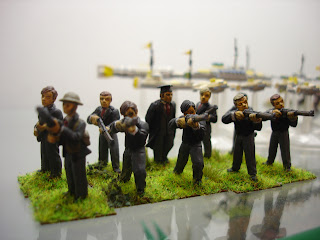 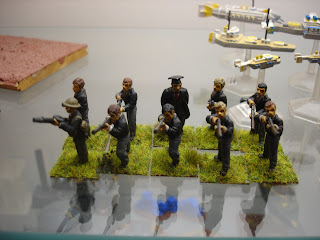 Obviously, they are sitting in my display case waiting for the rest of my forces to be assembled. You can see some of my Papal States aeronefs in the background. I especially like the porter/veteran with the Lewis gun and the tin hat.
Second (and last, for now, until I can get some Regulars painted up), is the Rolls Royce Armoured Car. Thanks to the glass shelf it is sitting on, it seems to be floating in midair. Kind of a neat but unintentional effect. In my fluff, I am claiming the Rolls is a gift to the Republic from some Scots who want to keep the English busy out West, and out of the North. 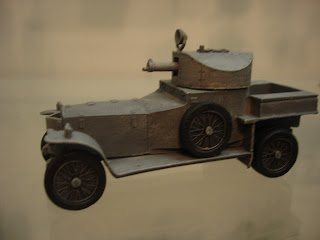 I am planning on at least one 10-man unit of Regulars (part of the Welch Fusiliers, I think I decided) and some more armed civilians and a militia unit. I would also love to get one of the 1st Corps buses and a civilian truck I can mount a 2-pdr portee upon.
All for now.
Posted by J Womack, Esq. at 5:48 PM 3 comments: