But it's not too bad. I got three minis, a pack of 28mm Schreckenwulf for Konflikt '47. 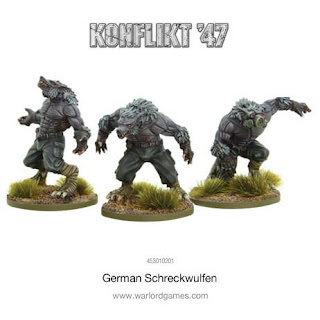 The plan is to use them for Doctor Vardu in VSF, but of course, I can use them for their intended purposes as well... I love double-dipping on figures.

So the tally is three purchased, zero painted. But I am really close on like a dozen or so finished painted. I may have started them in 2017, but it only counts when they are finished... right?
Posted by J Womack, Esq. at 4:34 PM No comments:

I think that this year I will try to fulfill The Pledge. It's been a while since I even tried, but I'm going to go for it this year. What's the Pledge, you ask?

I will paint more minis than I purchase and/or receive as gifts in 2018.

That's a mighty bold statement for most gamers, and for me in particular because I am incredibly slow at painting.

Pre-painted pieces count neither for nor against the Pledge.

I will break this into three categories: miniatures, vehicles, and terrain. I am not going to track by scale - that gets too complicated. However, for the smaller scales, I will count a base in place of a figure. Essentially, a single playing piece worth.

So, keep an eye on the Pledge Tracker I am putting in the sidebar. Let's see if I can stick to it!
Posted by J Womack, Esq. at 1:21 PM 1 comment:

At first glance, this game is a bit silly. I mean, you're an anthropomorphic dog, who wants to be "a good dog" and follow the Code of Man.

But we played for the first time on Thursday night, and it was surprisingly fun. As I can tell, the engine is a simplified and modified D&D 5E. I'm not very familiar with 5e, so not too sure about that. It is a very low crunch game, though, and a lot fluffier than many.

A lack of minis was part of the difficulty I think. We are all used to having a battlemat and minis out so everyone can tell at a glance how close things are. Made a few mistakes in how combat works - only movement provokes an attack of opportunity, for example, and there is no penalty for shooting into a melee.

Although we didn't finish the adventure (I was DMing), I think the four players still had a lot of fun being their dogs. And that's really the point, isn't it? 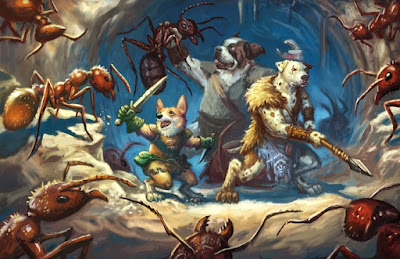