We all know how 'buggy' a version 1.0 can be, right? So don't hold me too strictly to these plans. But in a few weeks I will go on summer vacation, and have significantly more time for gaming as a result. The thought occurred to me that some sort of plan might help with gaming productivity in my slow time. Thus, the following:
Ummmm... I think that's probably it. Look for updates, though. This is only v. 1.0, after all...

Lost in the Warehouse...

Well, I got an email this morning from Steve Jackson Games. Seems that the website for Warehouse 23 is a little out of date, and there were no OGRE Mk. III-Bs remaining, even though they claimed "Low on Stock." 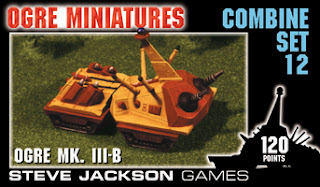 So no metal monsters for me yet. At least not until SJG gets the minis released. Color me bummed out. And on a Friday, too.
They need to hurry and strikewhile the iron is hot. We have all recovered from the Kickstarter expense by now. THey should Kickstart the minis, and take advantage of the learning curve from this one. Keep it simple, add only a few new minis as stretch goals, but offer extra pieces if certain goals are met. I.e., the initial goal is to get two OGREs into production. At one pledge level, you get one of the two models. At another, you get both models. If pledge goals are met, a third miniature will be produced, perhaps a non-OGRE (although since there are substitutes for everything but the OGRE, this may not be incentive). When a certain pledge mark is reached, add an additional mini as a freebie to those who pledged enough to earn at least one OGRE. But do not go overboard with pledge goals making two dozen new and different minis available, and thus taking an extra six months to a year.
Posted by J Womack, Esq. at 9:49 AM 2 comments: 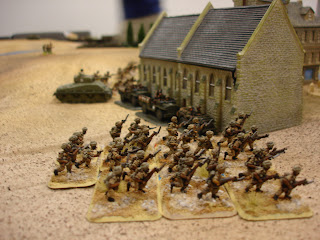 No. 7 Platoon advances into the village. 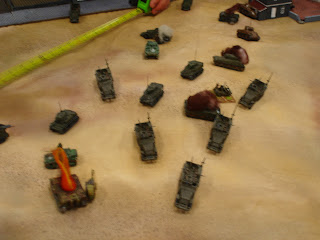 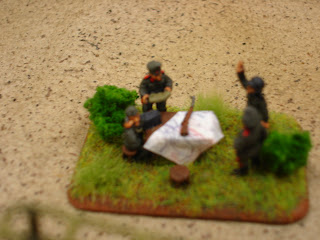 German Artillery Staff. Yes, that is a Kar 98 holding down the map.
Not my piece, but a lovely one. 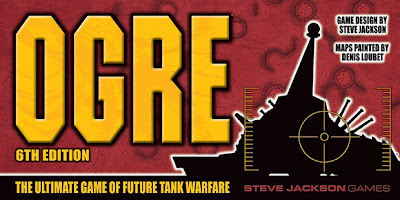 In anticipation of receiving the massive 25.2 pounds of OGRE-y goodness that is the Kickstarter Special 6th Designer's Edition, I placed a couple of orders today. Shhhh... don't tell my wife. So, what did I get? Well, I started with two of the boxed sets of OGRE Mk. III-B miniatures from Steve Jackson Games's Warehouse 23. 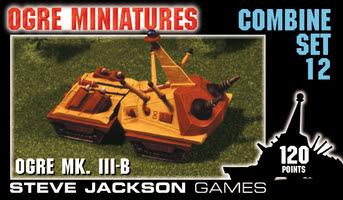 Then, I ordered two sets of sponsored counter sheets for the Designer's Edition: the Nihonese Empire by Thirdpower, available HERE, and the OGRE: Nightfall set from Fire Mountain Games. 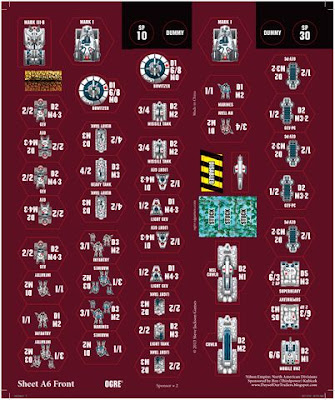 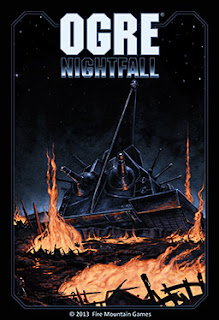 The cover for OGRE: Nightfall
OGRE: Nightfall is an alternate future history, not a part of OGRE canon. The basic story is that the OGREs have gone all Terminator: create a peaceful Earth by killing off all the people. The pieces are black and menacing, which is cool. I may even paint one of the metal OGREs I mentioned earlier to be a Nightfall OGRE.
Posted by J Womack, Esq. at 2:38 PM No comments:

A bit of painting.

Just a few photos of some painting I finished recently. 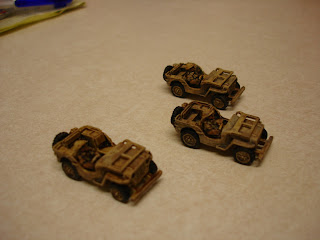 Three Jeeps for my Flames of War British / Indian Army.
Note that the drivers are on the proper side. 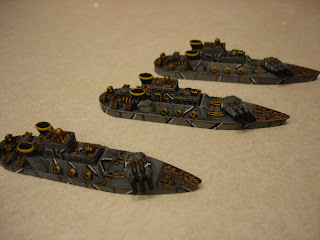 A squadron of Prussian cruisers for Dystopian Wars.
The ochre band on the funnels looks very yellow here. 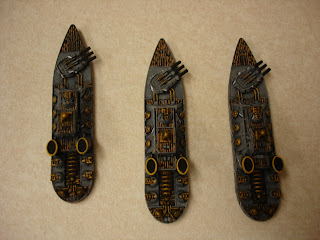 Top view of the cruisers, showing the planking pretty well. 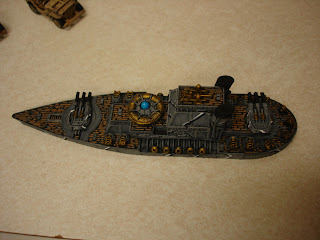 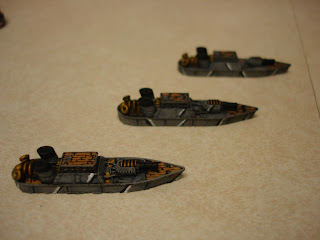 Finally, a squadron of Prussian frigates.

Almost done with two more squadrons of the frigates, then all I have to finish are the tiny flyer tokens and the two bombers. I also finished two 3-ton lorries for FOW, but no photos.

Ladies in Lace
This is an interesting project out of the UK to make two lines of female soldiers. One is for Lacew Wars era soldiers (think 17th-18th Century, tricornes, that sort of thing) and the other is for interwar females, especially in consideration of A Very British Civil War.
Not much in the way of images yet, and I have suggested a stretch goal of an artillery crew - no gun, mind you, just the crew - or a mortar and crew. I have not yet decided if I am going to back this one or not, but I am intrigued, and thought some of you might be interested in knowing about it. 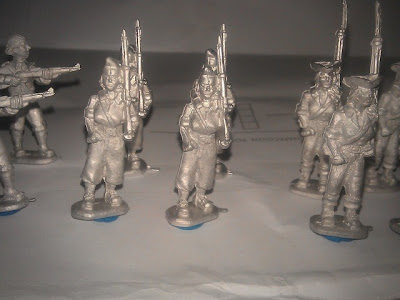 If Loki is a blgo whore, I guess this makes me a blog pimp. But you should check his blog out anyway, because it is quite nice.

Lokis Great Hall: 2nd Blog Birthday - Giveaway: I have been steadily blogging away for 2 years today. Over the last two years I have steadily grown to find some truly inspirational blo...
Posted by J Womack, Esq. at 2:49 PM No comments: 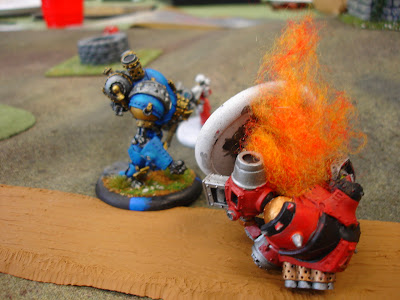 My Ironclad takes down a Khador Heavy. First kill of the game! Burn, you Russki! BURN! 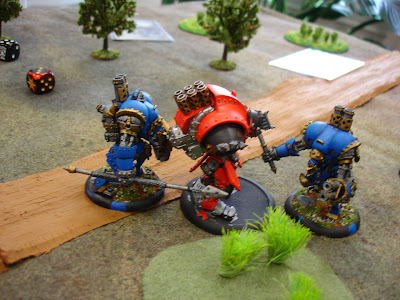 My Charger and Lancer taking on the other Khador. 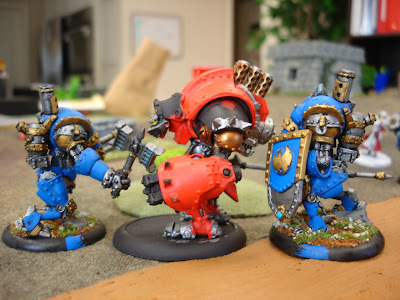 Same fight, other side. This picture is funnier.

Obviously, Zach is still in the process of assembling and painting his Khador 'jacks. And his infantry. And his war caster. I didn't take any pictures of the second game of the day, where my 14 year old brought Cygnar another stunning victory against Trollkin Hordes. Sorry about that, Noe.

One thing I noticed about this game is that the first few turns may go a little slowly, but the last three or so turns, there is massive snowballing carnage. I like that. It's a fun game, and I imagine I will invest in a few more models. I am looking at the Grenadier and the Defender. But if I do the Grenadier, I will definitely want to get some Trenchers, too. Maybe the Trencher Artillery, since that would mean a total of four Area of Effect templates in one turn. Add the Master Gunner, and I can call it in on top of my own troops with impunity...
Posted by J Womack, Esq. at 9:19 PM No comments:

The Iron Lady has passed away, the last of the Freedom Triplets (Ronald Reagan, Pope John Paul II, and her.)

It all came down to the warcasters fighting in hand to hand, and Cygnar's Coleman Stryker slaughtered the Khadorian female warcaster with his sword. Chivalry may be dead, but she had it coming after wht she did to my poor Ironclad warjack.

I also had a completely untouched Lancer warjack, while my Charger was also destroyed by the Khadorian warcaster. The last Khador warjack had only one damage box remaining when I took down the warcaster, ending the game.

A few pictures were taken, and will follow, soon.
Posted by J Womack, Esq. at 3:31 PM No comments:

Victory for the Raj!

My friends and I played a Mid-War Flames of War scenario on Saturday. My British Indian infantry helped out an American armoured infantry company in a breakthrough against two German companies. After occupying one of the two villages, they spent a good part of the next four turns acting as anti-aircraft protection for a pair of Tigers just a bit out of assault range. Eventually, they would shoot up a pair of anti-aircraft trucks (platoon kill!) and most of a panzergrenadier platoon, helping to clear one of the objectives for a platoon of Shermans to claim for the win.
Yes, this is the world's briefest after action report. When I get the pictures out of the camera, I will add them. Promise!
Posted by J Womack, Esq. at 3:18 PM No comments: