I decided that I wasn't entirely happy with the hab domes and such, so I have been making some changes to the paint scheme. Unfortunately, they aren't done yet and I am leaving town tomorrow for a week, so you will all have to wait with painfully baited breath to see what I have wrought.
Posted by J Womack, Esq. at 8:59 PM No comments:

Just a little something 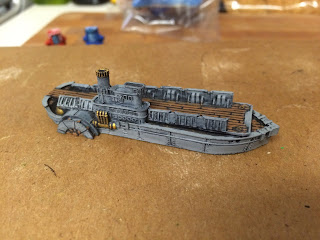 This is an escort carrier from the Merchant Shipping set for Dystopian Wars. It's a nice little mini and it is good for convoy raiding scenarios.
Posted by J Womack, Esq. at 3:30 AM No comments:

More stuff from the Ion Age, this time terrain. The Command dome was already 'finished' once, but I noticed I had missed some things and decided I wanted to make some changes to the color scheme. I'm thinking all hatches will be color coded from now on: 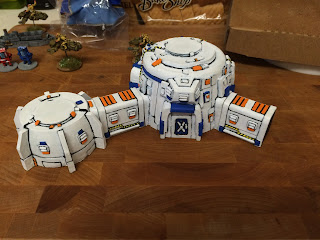 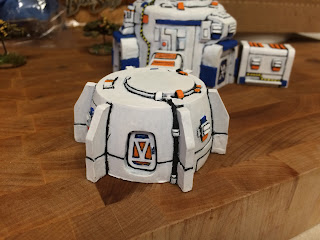 So, according to my scheme, this is obviously a Habitat Dome. I think I am going to make up some sort of signage for over the door on the hab domes. Or maybe at least a dome number beside the hatch? And... I just noticed I forgot to danger stripe the electrical cable on that dome. Back to the table for a quick fix. 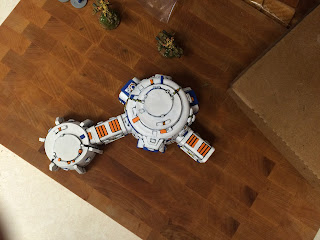 I have a few more pieces left to paint up for now: a four-way intersection, two domes, and two more corridor lengths. I think I am going to order a few more as well, at least one or two hab domes, a bit more corridor, the tower module, and maybe a blockhouse or turret section.
Posted by J Womack, Esq. at 7:00 AM No comments:

Something a bit light-hearted today. As you can see, the Cola Wars continue to rage far into the grim future. Coke Machine #106, a veteran of many campaigns against Thirst, is on the left, while PepsiBot #042, in its iconic blue livery, is on the right. 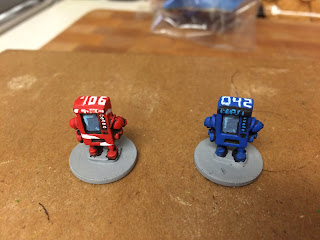 Yes, these are robotic vending machines. I have another in bright yellow called VendBot. He sells hot ramen noodles.

Minis are from the Ion Age. The bare bases are simply a function of their urban environment - concrete paving. I might add a line or two, maybe a spot of weeds poking through the paving. What do you think?
Posted by J Womack, Esq. at 3:30 AM No comments:

I've been a bit busy with my paint brushes lately. Over the next few days, I will share some photos. I thought I would start with a trio of grav bikes from Khurasan. These are 15mm Felids, a tigrid race, similar to the Kzin, I should think. This particular pack is the "Hostage Barons' Sons". I quite like them, don't you? 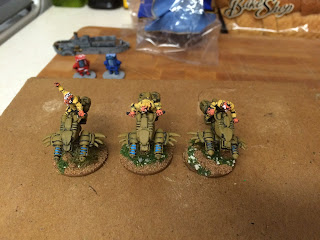 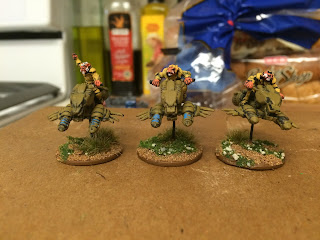 The set also comes with an optional missile launcher instead of the twin gun. Well, it comes with one of them, at any rate. I'm considering picking up another pack to enlarge the squadron and field a pair of missile-armed grav bikes. 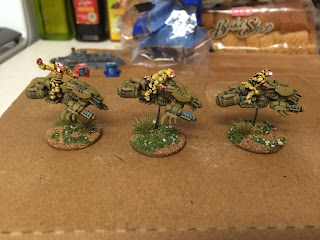 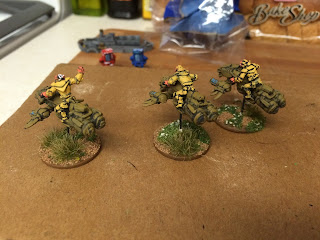 I made new flight stands for them from a washer, some Milliput, and a bit of stiff steel wire.

This is the Gruntz card I made up for them, using Barracks. Obviously, I hadn't finished painting them when I made the card, hence the lack of a photo. I'll correct that one of these days. I made the twin linked guns equivalent to a Full Auto Heavy Laser. The addition of the Peregrine Stabiliser Perk will insure that they always go in guns blazing. 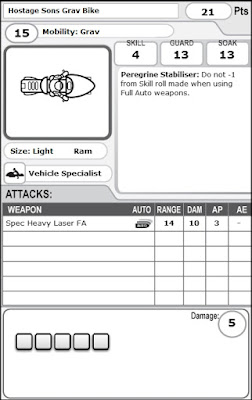 I finally managed to get a bit of brush time in a few days ago, and the results are the finish of a few terrain bits. While technically all of this is 25/28mm sized, they would work well for 15mm too. 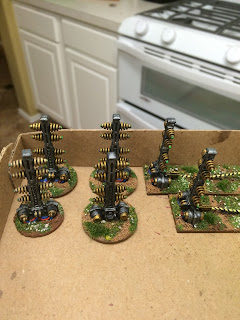 These are from the Battle for Macragge Starter set.
I use them as a sonic barrier for Venus or any other Sci-Fi setting.
I would buy more if you have any... 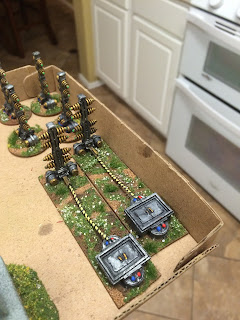 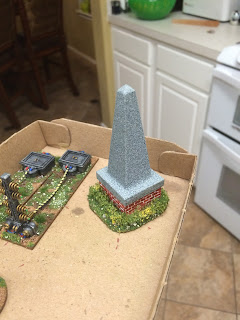 Naturally, I now realize I probably should have taken a few photos with, oh, I don't know, maybe a figure or two in the frame for a size reference! D'oh! 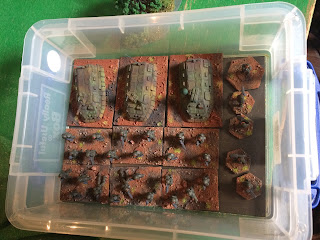 Some of Tamsin's 15mm Minis - Neu Swabian League, I think 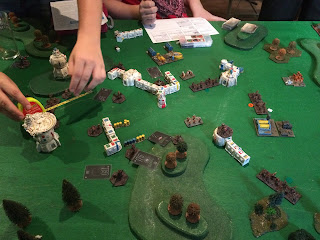 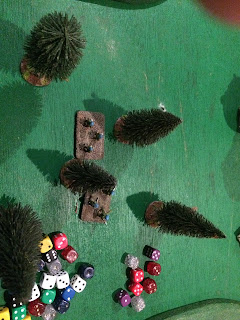 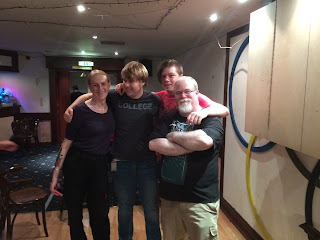 Tamsin, Dane, Zane, and Me 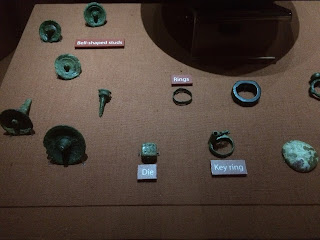 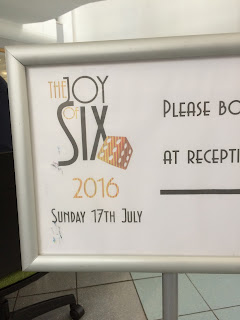 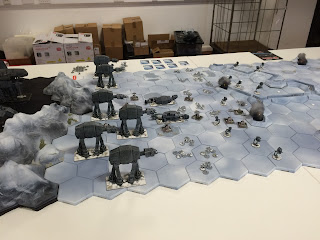 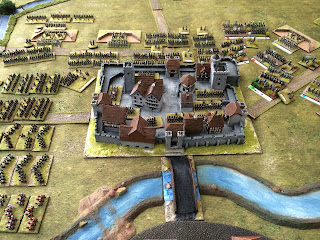 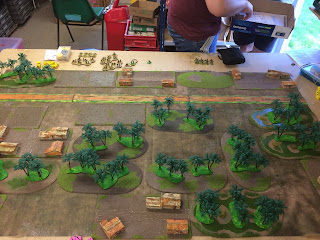 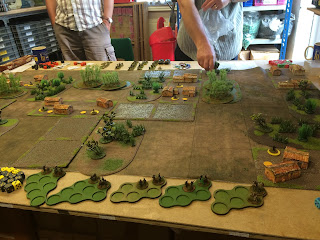 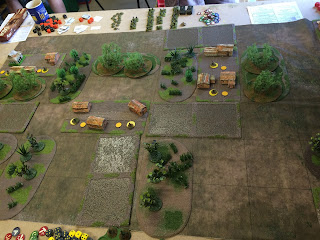 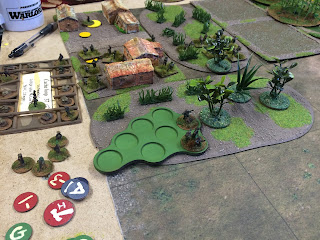 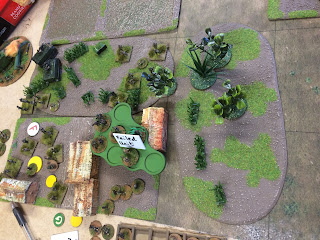 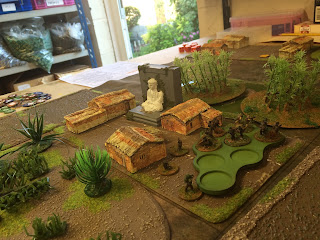 Some of the great Vietnamese terrain 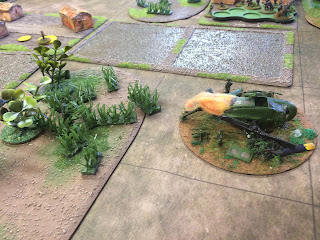