Whilst in Waco, visiting Baylor University as a prelude to my eldest's impending college departure (only one more year!), I followed up on my habit of checking into the local gaming scene when possible. In this case, a quick internet search brought me to the door of The Game Closet. I duly spent an hour on the premises during the day on a Monday. Granted, this was during the summer, so I expect that one or two of the patrons (there were five there, other than the owner, who I shall mention momentarily, the entire time I was present) would probably not have been there had it been a school day. Besides the five 'regulars' and myself, two other men came and left in the space of time I was there. So, a fairly busy place, I would say. The regulars were playing and discussing and organizing their Magic: The Gathering card games. Two of them were friendly enough to say "hi" as I walked through the play area to the sales display area of the store.

Layout of the store was pretty good, with an ample space for playing games, available terrain for wargamers, that sort of thing. It was all well-lit, and the a/c worked well - this is critical in Texas summer heat, folks. I would say about a 50-50 split in gaming to retail area. The retail area carried a large amount of Games Workshop product (no surprise), but also a good selection of Reaper, Warmachine and Hordes from Privateer Press, and less-well-known games (Malifaux, for example). In addition, there were a few bookshelves dedicated to RPGs, mostly the standards (D&D, GURPS) but also again some of the more uncommon as well (WFRP). There was s section of board games (pretty wide selection there) and the ubiquitous CCGs in display cases. I'm not knocking this practice - it makes the stores some much-needed bread and butter money. Just not really my cup of tea, that's all.

I looked around for a few minutes before I was approached by Dequan Watson, the owner. Dequan was really nice to talk to, and had a lot of knowledge about the gaming industry, it seemed. In fact, he related to me something I had not heard previously: that it appears Citadel was abandoning Crapcast, er, Finecast that is, and returning to plastics. Good news, that. We talked a little bit about how business was in Waco, how long the store had been open (as a child, I spent a  lot of time in Waco, and the store was not open back then), that sort of thing. He also mentioned that the store was helping to sponsor a convention in Waco on the last weekend in September. I think I might have to return for that! The store hosts other events on a weekly basis as well, including Magic tournaments, Warhammer nights, painting nights, D&D roleplaying nights, and more. They keep a schedule on their website.

Overall, I give The Game Closet a solid "A" rating. The only thing I can say would improve the store would be additional space and inventory. This, however, is a function of business volume, and so can't be held against them. If you live in the area, it's definitely worth checking out.

In Her Majesty's Name: The Servants of Ra, Exposed!

Okay, so I have got the bug for this game pretty hard. I just finished a few days ago with one of the Adventuring Companies designed specifically for the game, the Servants of Ra. Here's a gratuitous picture of Akhenaton, the Reincarnated Pharaoh. You can see the Mummified Priest's arm and a few of the cultists in the background. 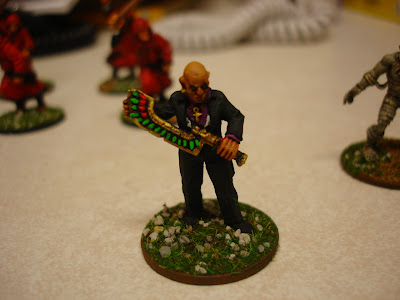 I also got to thinking about what figures that I already have that could be used in the game, and with my collection of bits and pieces of so many different VSF elements, that list got pretty full. I figure that I can also field the following companies, or will be able to do so soon:


The only one of these that needs any figures purchased to complete it is the Legion Etrangere. I only have a couple of figures suitable for them.
Posted by J Womack, Esq. at 8:52 AM 2 comments:

In case you missed it...

Victoria's Boys in Red: Azog Treadbike Previewed:    Over on TMP, the madman known as Tango often clues folks in on the newest and neatest stuff out there on the internet for gaming enthusi...
Posted by J Womack, Esq. at 3:14 PM No comments:

Litko has these in the Jim's Lab area right now. Strips of pre-made plywood shingles for buildings. 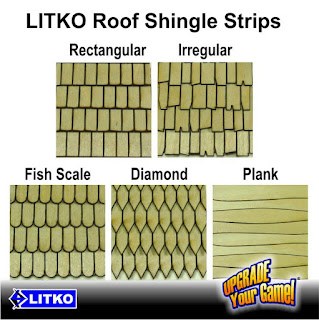 They are almost a foot long per strip. Five patterns to choose amongst.You get ten strips for $11.99.

For my fellow Whovians, this is too cool for school. 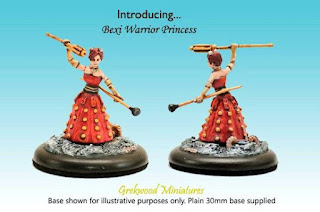 Inspired by this Cosplay at London Comic-con... 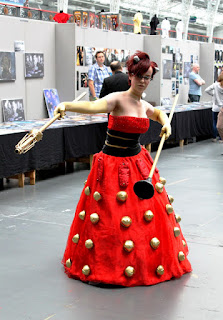 Disclaimer: I have no idea who owns this item, nor am I endorsing them as a seller. I just saw it and thought "Man, that's cool looking!" 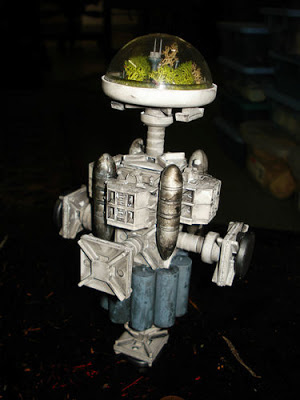 This is the coolest part, as far as I am concerned.
eBay Link
Posted by J Womack, Esq. at 12:57 PM No comments: