I took advantage of the Summer Sale on Steam to buy the OGRE online game for only $14.99 - yes, that's a free plug. But time is running out on the sale, so if you want to get it for $10 off, hurry.

The next question is obviously this, then: "do I want to buy it?" The answer is "only if you like to play OGRE or any turn-based wargame." I've played about six games so far, and amassed a record of 4 - 2. 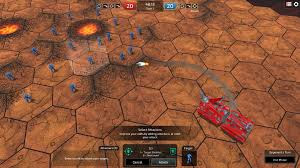 I haven't played against an online opponent yet, but I look forward to it. There is a campaign mode  for single player that I have enjoyed so far, with rogue OGREs causing all sorts of trouble.

I haven't tried to customize any scenarios or anything yet. Like I said, I just purchased the game yesterday and I already have about six hours on it.

I'm very happy with my purchase. Mostly, the randomizer for the die roll hates me. But that is pretty typical for me.
Posted by J Womack, Esq. at 11:17 PM No comments:

My friends and I just started playing a Dark Heresy (2nd Edition) roleplaying campaign. If you're not familiar, it's set in the Warhammer 40K universe. It's a grim, dark sort of game. PCs are Acolytes, servants of the Imperial Inquisition. Graecus is a member of the Adeptus Arbites - essentially, Judges like from the Judge Dredd comics (and movies I suppose, but more the good Karl Urban one than the dreadful - no pun intended - Sylvester Stallone one). I told the other players that was pretty much exactly how I was going to play him - an implacable and remorseless servant of the Emperor. 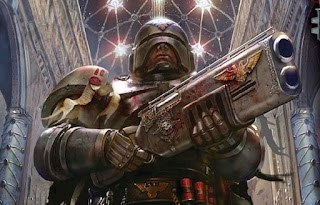 We didn't get too much playing time, as we had to create characters on Tuesday, but we did get a bit into it. Essentially, our team of three (myself, a Sanctioned Psyker, and a Highborn bureaucrat) has been sent to arrest a Noble suspected of heresy. We are also enjoined to confiscate his collection of relics and any evidence that he may be trafficking with daemonic powers. We dropped out of orbit in an assault lander which blew open the wall of the noble's fortress/home and dropped an assault force on the opposite side of the place as a diversion.

Approaching the entrance, I saw three humanoids through the haze of the rubble. Taking cover, I demanded their surrender. They fired on us instead. A brief firefight ensued, in which I killed one servitor (a cyborg) with my shotgun, and the psyker burned a normal human guard. The third guard began reloading, and I rushed his position, demanding he drop his weapon. My intimidate check was pretty successful, so the perp dropped his shotgun and raised his hands. I approached closer, saying, "You have fired on agents of the Inquisition and servants of the Emperor in the performance of their duties. The sentence is death." And then Graecus executed the traitor. The other two Acolytes were a little shocked. I reminded them that I had not said "Surrender" or made any deals. I had demanded he drop his weapon, and then I terminated him with extreme prejudice.

That's basically where we stopped for the evening. I had fun, protecting the Imperium from traitors and heretics. We will see how far we go. There is talk of getting figures to work out battles on a grid mat like we do in Pathfinder. I'd be okay with that but I think for now 'theater of the mind' is enough. If we do go for minis, I know what I need... 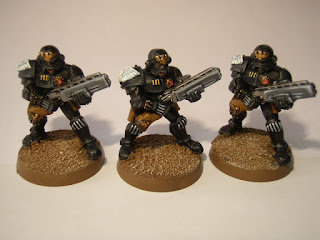 May need to buy one of these, though I know I had some at one point.

No painting lately, but some boardgames

Partly a result of having left town for ten days, and recovering from same afterwards, I really haven't done much painting lately. I'm going to try to get back into it this week.

I did play a few games over the past few weeks. I beat my wife in Scrabble, a classic. I got in Triplanetary from the Kickstarter but haven't had a chance to get to play it really. I did practice some of the maneuvers - the vector system takes some getting used to, really.

I purchased Fallout, the boardgame. Played a game of that solo trying to figure out how it works. Managed to win, and enjoyed the solo play of it. I am looking forward to playing with others.

Finally, my buddy Zach, his son, and I played a game of Zombicide: Green Horde, which he went all in on with the Kickstarter. Tons of stuff. TONS. We played the first scenario, and managed a win. Those orcs are tough! Not so much to kill, but man they chew you up if they get a a chance to hit you.
Posted by J Womack, Esq. at 10:39 PM 2 comments: