Having read an interesting post on ISLP just now, I got to thinking about all the clever/stupid things I have done or seen done while playing RPGs. I'll list some here, but what I really would like to see is other people's crazy ideas...
Some of mine:
So, what have you got?
Posted by J Womack, Esq. at 8:54 AM 2 comments:

Sorry guys. Real life has a nasty habit of getting in the way sometimes. End of school craziness. Only one more week to go!
Little progress. We have been playing a bit of Labyrinth Lord lately, for an hour or so in the evenings. The boys are still slowly working their way into the Caves of Chaos. In fact, I need to re-populate parts of it, as they were down for a month with a nasty infected rat bite or two... So those caves they thought were clear... aren't any longer. I wonder if they go back over there?
One beef I have with LL is that it is way too easy to kill off a first level character or five. Even in what is supposed to be an introductory module, the boys are either having terrible luck or just not enough healing. We frequently play one encounter, then have to go back to the castle to heal up for a day or two. Their tactics seem sound (fighter and dwarf in front, then elf and cleric, then wizard and two hirelings). But with only one 'cure light wounds' spell, the cleric runs out fast.
I did finish the black smoke projector and the four heavy BattleMechs, plus a couple of trucks for BattleTech. I need to finish work on the Aethergraph. It is looking pretty cool, I just wanted a little more content for it. Again, if you have any... email me! aethergraph@gmail.com I especially would like artwork or reviews of rules sets or even fiction... plan to publish what I have on May 31, God willing and the creek don't rise.
Posted by J Womack, Esq. at 6:22 PM 3 comments:

...has been found! I lost one of the wheels for my Masked Minions' Black Smoke Launcher. This meant that I could not (obviously!) finish the gun and crew last month. The crew is done, but the gun was set aside until I could obtain replacement parts.

Found it on Friday. So I will hopefully have the gun done by tomorrow night. So why is all of this a big deal? Well, it is one of the things that is keeping me from publishing The Aethergraph. I wrote up the devilish device in GASLIGHT terms for an article in the first issue, but it really needed a photo. Now I can add that. Woohoo!

Just thought I would let you know. By the way, I am still hoping to get some more stuff for the fanzine. Send it to me at aethergraph@gmail.com.
Posted by J Womack, Esq. at 8:55 AM No comments:

Genre: Colonial gaming.
Scale: 15mm.
Rules: The Sword and the Flame/20th Anniversary
Figures: Mix of OG and Stone Mountain
Scenario: Not much story here. Lieutenant Hiram Bigg-Botham is leading a platoon of infantry through the savannah of Zululand. A supply wagon is along. And a troop of lancers, for protection. Suddenly, a hundred Zulus appear from nowhere. Stand and fire, or die at the end of an assegai (iklwa)!
Okay, so the question I have is this: do you think this will give a decent game for two to three players plus a referee? Some of the guys down here in Clear Lake and I are looking at getting a colonial game together for our June gathering. I've never set up a TSATF game, though I have played in a few. I have twenty British infantry, twelve lancers, a supply wagon and a field gun (if needed) ready to play, and forty Zulus done, with (hopefully) sixty more to be done by game time. I would like to have one British player and one or two Zulus. All Zulus are spear-armed (no rifles).
Posted by J Womack, Esq. at 8:22 PM No comments: 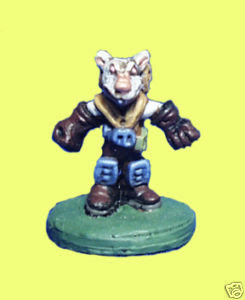 Some greenstuff wings and maybe you are in business... Supposedly closer to 15mm in height, which is fine for Yazirians. Several poses available as well.
Posted by J Womack, Esq. at 1:01 PM No comments: 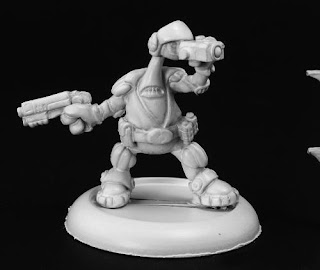 Except for the neck mouth and the size... looks like a Dralasite to me. Need to be buying one of these...
Posted by J Womack, Esq. at 12:03 PM No comments:

Still exploring the Caves of Chaos, our heroes have hit many snags.
The original adventuring party consisted of an Elf, Halfling, magic user, fighter and cleric, all just beginning their careers.
The goblin tribe of Ghazgug the One-Eyed has been destroyed, including Ruben the Ogre Mercenary. Ghazgug himself was not discovered by the adventurers as they cleared the caverns of goblins, but his losses forced Ghazgug to flee. Ghazgug took his tribal treasure and few remaining followers to serve his allies, the hobgoblin tribe of Hakazuz the Mighty. The heroes were saddened by their heavy losses in this scouring: Dyacus the Meek, a young wizard, Marid il Shibbaq, a halfling warrior, and a human fighter named I. Arthur Tickus, who plunged to his death while leaving the caves to return to the Keep.
The adventuring group recruited three new members at the Keep after waiting a week: Keith Stone, a fighter, Oumdur of Clan Telttab, a Dwarf, and Arrod Blackstock, a magic user. They set off again with the Elf warrior Lancegorn and Brother Eltsen, an acolyte in the service of Oz the Great and Powerful. Returning to the caves, they began the scouring of Hakazuz's tribe.
In their first foray against the hobgoblin menace, the adventurers purged one of the tribe's common areas, slaying the males and the females as well, but allowing the young to flee. One female fled early in the battle, and returned with additional forces: six goblins and a hobgoblin guard from the nearby guardroom. Defeating these foes, our heroes decided to retire to the Keep for healing and rest.
Two days later, the heroes again advanced into the dark caverns. In this foray, they discovered a guard chamber, and cleared it, and then found a torture chamber. The two brutal hobgoblin torturers were slain, and most of the prisoners released. Among the prisoners were four humans (a merchant, his wife, and two guards), an orc and a gnoll that gibbered madly about "slaying them all." The humans were released and the guards armed with hobgoblin weapons (crude, but serviceable). The orc was also released and given a sword, as he had sworn to kill any goblin or hobgoblin scum he saw. He got the chance to do so soon, as the party ran into a small group of goblin messengers almost immediately after leaving the torture chamber. Although our now quite large group managed to slay the goblins before they could flee, the orc fell to one of the goblin spears. The remainder escorted the merchant and his wife back to the Keep, to safety.  The guards, cousins named Efil and Erup swore to serve the party faithfully for one year for no more than equipment, room and board.
That's where the adventure stands as of the start of the day today. This afternoon's epic struggle against Hakazuz the Mighty will be chronicled in the near future.
Posted by J Womack, Esq. at 8:07 PM No comments:

The poll at the top of the page is specifically for colonial British figures, not VSF specialties. Hence, no GW Praetorians or Mordians, no Parroom British, no Eureka Queen's Own Skywalkers, or anything like that. I suppose Eureka's pure colonials would deserve a spot, but I can't modify the poll now, so just mark them as "Other".

If you vote for "Other," please leave a comment here to let us know which you like.
Posted by J Womack, Esq. at 11:06 AM 3 comments:

I've gone back and added all of the Royal Xenological Society posts from Victoria's Boys in Red now. You can find them under the post label of "Xeno Society."
Posted by J Womack, Esq. at 9:23 AM No comments: