We are in the process of moving, so everything is packed away. But, once I get unpacked, I have a lot of neat stuff to share, I promise. So, sorry about the total lack of updates over the past five or six weeks. There just hasn't been much time for doing anything fun and less time to write about it. Heck, I just barely have internet service set up in the new house now. Thanks Comcast, you suck.

I did manage to get in a a day of Team Yankee back in February, where I played in two games. I lost both, naturally... but they were close, and I would have won the second game if we hadn't run out of time before my victory conditions were met (we had to call it at end of turn 4, I had to hold an objective at the end of turn 6). I have the photos on my phone. Which died a horrible death yesterday, naturally. I am supposed to be getting a new phone tomorrow, and maybe - maybe! - I can save some of the stuff on the old phone. I hope so.

I will say that I have gotten into very deep trouble with regards to the Pledge. I bought two boxes of Yuri's Wolves tanks for Team Yankee. That's ten T-64s and four BMPs. I also got a Soviet Motor Rifle Company. That's 79 infantry figures. And I ordered a set of the glow-in-the-dark Ogre Miniatures. The post office then lost them somewhere after putting them on a truck in my town. Grrrr... But I ordered some replacements. That's another, um... 43 vehicles. So I will update that counter. 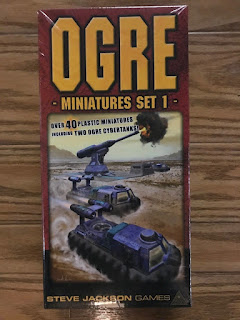 And none of the terrain I have been buying should count against the Pledge, since it's all ready to play. Battlefield in a Box... lots of it. Like three sets of Modern Roads, Modern Road expansion, the Manor House, the Estate House, the Cobblestone Squares, the House Extensions, two Apartment Blocks, a Factory, a Department store, two oil tank sets, a Petrol Station, a box of the garages, another Desert Administration Building, Ruined Desert Houses, Desert Sandbag markers, the Overpass, a set of Carparks, and two Fast Food Restaurants (I am going to repaint one to be a Waffle House). I think that's it, so far. I want more apartments, some billboard signage, and at least one more Factory with the added floor that you have to order direct from Battlefront. I may get two. I think they make good office buildings. 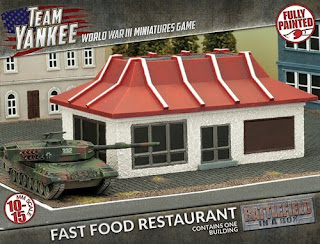 Plus... in the near future I will have photos of my new custom gaming tables and the painted gaming area... and an announcement hopefully in early April... So stay tuned, all 70-ish of you, and please share this info.
Posted by J Womack, Esq. at 3:07 PM No comments: