My son and his three best buddies have been playing D&D with me for about a year now. We don't meet regularly - the schedules of four teenage boys are a bit difficult to manage, especially with jobs, schools (three different) and girlfriends thrown in. But we manage, a bit.

After looking over Pathfinder, we decided (i.e., I talked them into it) to give it a try. And so I plunked down some bucks, got the rules, the pawns, and the Rise of the Runelords Anniversary Edition Adventure Path. I'm currently reading through that book while we finish off the last D&D adventure (part of another Paizo-made path, the one from Dragon magazine that takes them to the Isle of Dread).

Anyway, it's just (another) project started.

I can't wait to drop this guy on them:

This was the last weekend of January, actually. Jim purchased an entire set of minis, already painted, and the rules, on eBay from someone getting out of the game. The figures he picked up are 28mm, Foundry I think, and quite nicely painted and flagged. The big chunky group bases worked well with the visual aspect of the game and the level of command and control. 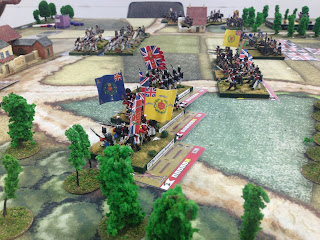 The British infantry advance boldly across the CigarBox battle mat. 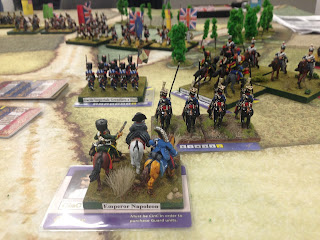 The Man Himself, Napoleon, the Corsican Ogre, leads the French onslaught.
From the rear, like a good general. 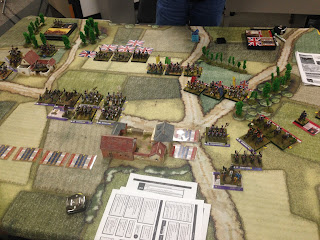 We used 15mm terrain, and that seemed to work well since it's more of an idea that "this area is built up" than "this building holds a squad". Again, scope of the game - it's not Flames of War.

Two games were played, and the result was a French victory in one and a British victory in the other. Everyone playing seemed to enjoy it. It's an interesting system, and I have a feeling we will be seeing it again in the near future.

This is Winston. He's my new buddy. He's part of the reason I haven't done much game stuff lately.

It's been a while since I posted one of these, and I don't have a lot of time at the moment, but I wanted to get down my impressions of the store that bills itself as "Mobile's Gaming HQ", Gamers N Geeks.