A Question of Artillery on Tabletop...

Why on Earth (or Mars, or wherever) do the rules for most wargames set in periods after the First World War place heavy artillery on a tabletop? With ranges measured in miles, I just think it is silly. I would much rather simply have the observer teams on the table, calling in artillery from guns properly placed, i.e., well behind the lines! And any point on the table is in range.
Am I the only one?
Certainly, you should still pay the point cost or whatever is involved in acquiring the things, but depciting them on the tabletop is an obvious ploy to sell miniatures. Sure, and they may even look really cool. It is just the stupidity of placing your guns somewhere that your enemy tanks could so easily get at them is mind-boggling.
Unless the pieces in question are part of a scenario, like Captain Winters' capturing the gun positions at Brecourt Manor. Then it makes sense as part of the story or campaign.
Posted by J Womack, Esq. at 2:52 PM 3 comments:

I think this sucker would be awesome for any pulp or retro sci-fi game. With some added rivets and a bit of boilerwork, I think it might do for VSF as well. What do you chaps (nd lovely ladies, of course - don't want to forget them!) think? 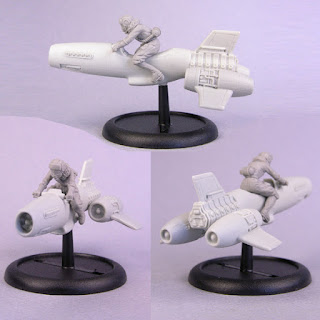 Speaking of 'suckers', wouldn't want to stand too close to that front intake. Looks too much like the old A-7 Corsair II, aka the"Maneater," for my comfort.


This little beauty is on restock soon from Bombshell Miniatures. They also have a few other interesting miniatures. I especially like the female mechanic, who reminds me a fair bit of the mechanic on Firefly. Shiny!
Posted by J Womack, Esq. at 3:47 PM 1 comment:

Lots of Paint Being Chucked About...

I have been (for me) quite productive in the painting arena these past few weeks. The result is that I am actually completing some units, or getting them nearer to completion. For example:
This does leave me with quite a bit to work on still, and I keep "accidentally" buying more things (like OGREs and GEVs, and...) but I am moving a few things off the production line, and that feels really good.
Posted by J Womack, Esq. at 12:43 PM No comments:

As I promised previously, and for those of you who do not also follow my VSF blog, Victoria's Boys in Red, here are the photos of the Dragonfly Lancer, aka the Bug Boy. By the way, calling a lancer "bug boy" is equivalent to asking a US Marine about his hat. 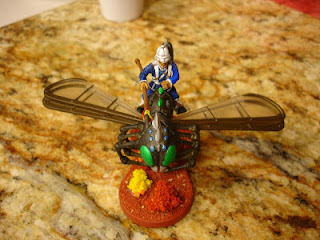 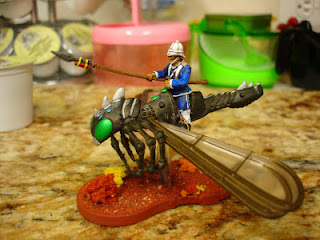 "More commonly known as the "Dragonfly Lancers", the Aerocavalry ride into battle astride a mechanickal dragonfly, powered by handwavium and held aloft by unobtainite. They bravely (some would say 'recklessly') charge right at enemy aerial vessels, hoping to strike home with their long, spar torpedo-like Grantham Patent Explosive Lances. They make daring low-level attacks against landships and the like, skimming just over the terrain in a dashingly bold manner. The landing struts of the mount can also be used to carry cargo while in flight, and the whole thing can hover in place at need. Quite the thing for delivering desperately needed supplies to remote outposts, or for dropping small bombs on recalcitrant tribals."
Posted by J Womack, Esq. at 10:21 AM No comments:

OGREs on the Horizon! 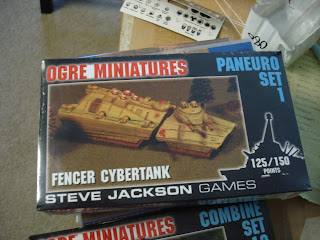 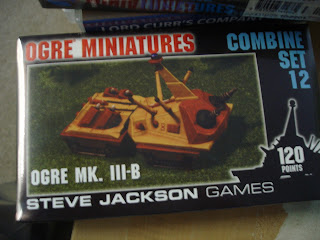 Yep, I'm that easy. Tamsin over at Wargaming Girl is a really talented painter. You should already be following her blog. But, if you aren't here is just one more reason to do so: she's giving away goodies. I like freebies. You like freebies. And adding a link to the drawing here adds to my chances of winning freebies! Hurrah!

Wargaming Girl: 100K Prize Draw - Day 1: Well, having reached 100k page views, I needed to get some prizes for my giveaways so after work today I headed down to Orcs Nest to see wh...
Posted by J Womack, Esq. at 3:53 PM 1 comment:

Okay, so I have almost finished the prototype of the British 17th Lancers mounted on a mechanickal dragonfly. Once I get the base painted and flocked, I will take a picture and share. Or maybe not - I could save the group for next years Lead Adventures Lead Painter's League competition. Right now, the only way I am ever going to be able to pariticpate is to paint well ahead of time, since I am in school and painting time is somewhat limited.
I have also just about finished the Prussian Naval Battlegroup for Dystopian Wars. All that remains is the two Geier-class bombers, and they are nearly finished. In addition, I have almost completed (about 90%) a Rhine-class fleet carrier. I just need to zig-zag stripe it and paint the Tiny Flyer tokens for a third Squadron (I already have two squadrons painted up from the battlegroup).
So next up on the painting table of concentration to finish as a unit are the last five German riflemen of the KFG. The KFG, if you recall, is the name I gave to the German secret weapons group. These fellows are all armed with Lichtgewehre (light rifles - lasguns). The figures are GW Mordians. These have been about 50% done for over a year. Time to tick that unit off the list.
One of my goals this year is to be prepared to field at least two 28mm forces for Battles by GASLIGHT on Venus, Earth, and Mars. I have enough Automatons on Mars for one force. I have nearly enough British for Mars, as well. I just need to finish up one or two British infantry to have a basic force, although my eventual plans for that require quite a bit more. I am in the same boat on Venus (which is good, what with the swamps and such). I have enough basic British infantry, but I need some support for them. I still need to add to the Germans. I also want to get the lizardmen finished up. I think one more unit of Gaters (Saurus) and a few Elder Ones (Temple Guard) to lead would be enough for a start. For Earth, anything human and set for Venus can work on Earth, though I want to do some redcoated British on Earth as well. Maybe Home Service uniform. We (my sons and I) have also considered using Eureka's frogs and turtles as Deep Amazonian lost tribes. Maybe I need to sit down and re-organize everything, really hash out the current plans...
One last thought before I go for now...

Good for either Pulp or VSF gmaing, and inspired by photos of this 28mm zeppelin table: 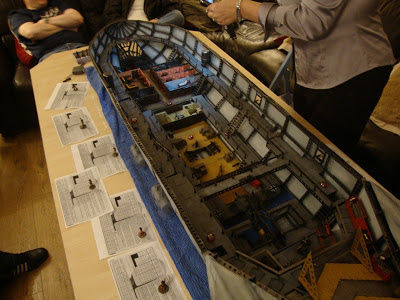 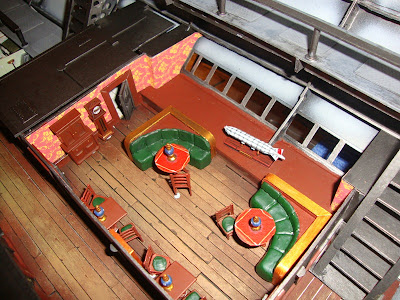 
On your way home from an safari in the picturesque highlands of Bongolesia, a problem arises aboard the zeppelin carrying your group. One of the servants was apparently infected with a terrible tropical disease, and has died. Sadly, he did not stay dead, but has risen as a zombie. Infecting several passengers and crewmembers, the plague has spread throughout the vessel. Now, they all suffer from an insatiable hunger for flesh. Your flesh.
Good luck. You're going to need it.
Posted by J Womack, Esq. at 9:58 AM 1 comment: