Queen and Doctor Who

If you haven't run across it before, and you're interested in Alternate History gaming, you might find this blog very interesting: Winter of '79. Currently, they are chronicling the Welsh Rising of 1979. I hope it goes well for the Taffys.

You might recall that my Very British Civil War faction is Welsh Nationalists. So it is interesting to see the results coming through.

Anyway, if you are into Cold War-era gaming, you will probably enjoy it.
Posted by J Womack, Esq. at 10:53 AM No comments:

These photos were taken at our monthly club gathering on 19 May 2012. We had some new folks show up, which was nice: Daniel, from the UK and newly arrived in Houston, with his wife, Tatiana, and Mike, a visitor from Baton Rouge. We had two games of FOW and one of Warrior (Ancients).

My son Dane helped out with the Soviet side in one of the FOW games. So that is where I got the most photos. Sue me.

The Warrior Ancients was more of a learning experience, getting familiar with the rules, than an actual game. But the figures were real purty...

The other FOW game: a British night attack against a German-held town.


We meet on third Saturdays and fifth Saturdays when they happen. Usually. If you're in the Houston area, and want to play something historical, let me know.
Posted by J Womack, Esq. at 11:41 PM 1 comment:

A Worthy Charity - Please Check it Out

A friend of mine, an officer in the US Army, just let me know about this small scale charity that is looking for some funding. It is to help returning soldiers deal with PTSD by building models.

Please click on the link and go check it out. If you feel so inclined, please donate.
Posted by J Womack, Esq. at 8:29 PM No comments:

I love comments. And heck, they aren't even moderated on this blog - though I will remove any that seem spammy or that include inappropriate language or material. My kids check this blog, after all.

On the plus side, the more feedback I get, the more active I will be on this blog. Positive cycle, and all that.

He puts it so well: OGRE Kickstarter Conrats

Super Galactic Dreadnought: Congrats to SJ Games: The project started with a funding target of $20,000 to get the OGRE Designer's Edition (a/k/a OGRE6e ) off the ground, and it ended up wit...
Posted by J Womack, Esq. at 11:12 AM No comments:

Had a good game of The Sword and the Flame on Wednesday night with my buddy Zach. He played the Zulu hordes, and I handled the stout-hearted British.

Zulu forces: 5x Zulu impis of 20 men each, plus a grand induna. All assegai armed.
British forces: 1 platoon of infantry, 1 supply wagon, a major in command, and a troop of lancers.
Simple scenario: Get the supply wagon from one end of the table to the other.
Terrain: Mostly open, with a small kraal and some thorny thickets.

Turn 1: Three red cards in a row for movement, so all the British forces trundled along, headed as fast as they could for the other end of the field. The cavalry scouted one possible hiding spot. The infantry faced right, suspecting the enemy to attack from that direction. Three units of Zulus then sprang up from the tall grasses to either side of the column and charged into the boys in red. Two were right behind the infantry, and the third was to their front! Some pretty hot shooting killed two of the Zulus to the front, including their induna, and wounded two more! Without their leader, the Zulus wavered at the last moment, and did not complete their charge. One of the impis charging the rear of the infantry were so frightened by the loud report of the rifles that they too were unable to complete their charge. But the third unit piled in... and killed ten Englishmen, wounded one, and forced the rest to flee the battlefield, for a loss of only four Zulu wariors in the fierce hand to hand combat! Luckily for his family name, the Lieutenant was amongst the glorious dead, and not the nine who fled.

Turn 2: Thankfully, the prior turn's Morale Phase kept the nearest impi from pursuing the rapidly fleeing wagon and the cavalry line. The cavalry stormed forward, flushing out more Zulus. Random movement kept the Zulus from closing with the wagon and the major, but placed them directly to the rear of the cavalry. The two newly revealed impis can't quite reach the cavalry this turn, but it looks bad for the next turn. The lancers try their carbines, but fail to achieve any results.

Turn 3: The wagon and major decide to cut across the thorny thicket rather than waste time circling around it. Then, the climactic charge! Two impis charge the lancers. Carbines take down a few, and one impi fails to close. The other charges angrily, and leaves no stragglers (rolling a six, lucky bugger). However, the great induna and the impi's own induna that make it into the close combat are spitted on British lancepoints, along with thirteen more warriors! The British lose five killed and two wounded, who swing up behind their mates and ride pillion. The Zulus fail their Morale check, and the Zulu survivors of the cavalry battle flee the battlefield. The remainder of the Zulus will be unable to move in the next turn due to the loss of their general.


Turn 4: With the Zulus immobilized by shock at the loss of their Great Induna, the British take the chance to move as quickly as possible to their objective. The wagoneer whips the oxen mercilessly, and the cavalry take position on their flank, screening them from the remaining Zulus who will surely pursue.

Turn 5: Their shock over, the Zulus move to overtake the fleeing British column. The wagon continues to move as quickly as possible toward the safety of the fort at the opposite edge of the table. Cavalry carbines fail to cause any casualties, but the Subaltern in command pots one with his revolver at maximum range.

Turn 6: The British wagon escapes the table, and the cavalry follow at best speed, outdistancing the foot pursuit of the nearest Zulus. 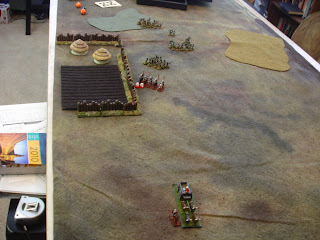 RESULT: Marginal British victory. Losing the infantry so early hurt, but the wagon and the cavalry made it. If the Zulus had not lost their general, it would have been much worse for the British, I think.

I spent many a Saturday morning watching this show when I was a kid.

space1970: News: JASON OF STAR COMMAND on Netflix: Fans of Filmation's Saturday morning sci-fi romp, Jason Of Star Command who haven't yet picked up or found a copy of the (rapidly becomin...
Posted by J Womack, Esq. at 9:58 PM No comments:

I suppose I ought to start with a wrap-up of last month. I did finish the Indian Rifle Platoon, as expected. I also painted a 25mm building for VSF on Venus. Still incomplete are the Welsh Regulars for VBCW, and the Empire Great Cannon's gunners. Have not started the Indian Machinegun Platoon. Which brings us to the May Goals:
My friend Zach bought me some toys when he was on vacation - a lot of GW Epic stuff. I will be using this as support weapons for my 6mm VSF forces. It will even be the start of the 6mm French, for which I have no infantry, cavalry, or guns. Oh well, I can always order some later, right?

Not a lot of new stuff, and what there is should be fairly easy, but I want to get those 28mm figures DONE this month. Maybe I'll snap some WIP shots and post them. If that's all that gets completed, I will be happy. Happy-ish, at any rate.
Posted by J Womack, Esq. at 2:42 PM No comments:

"Following a random group of individuals heading to Sheffield, the series follows the survival of a mixed group of train passengers who have been accidentally cryogenically frozen. Waking up decades later, the passengers find that they are some of the last remaining humans to have survived an apocalyptic meteor strike, and are alone in the British countryside."

Go there. Save the TEXAS. She's a grand old lady, and needs help.

I finally finished my first graduate class last night. Man, this thinking thing has gotten harder, hasn't it? Or is it just that since I haven't really had to do too much of it for the last fifteen years or so, I am sorely out of practice?

I think I will get a B for the course, which is okay, but I was hoping to get an A. I did learn a good bit about the history of the British Empire (this is what the course was over), especially in regards to the early 20th century. I even learned a good deal about the interwar society of Britain, which may come in handy for my Very British Civil War gaming.
Posted by J Womack, Esq. at 2:26 PM No comments:

I already own MACROSS on DVD, but if you don't have it...