Before I forget, I wanted to mention that I played a game of Bolt Action with my regular gaming club last weekend. Jim Johnson was kind enough to provide the rules and the minis. All I provided was a tape measure and some breakfast tacos!

The scenario was vaguely Market Garden: British Paras held a town across a bridge, awaiting reinforcement down a single road. Germans were deployed in the middle, to defend the road and prevent the British from linking up.

Marder holds the crossroads... but not for long.

In a game of some serious ups and downs, the end result was a German victory. Sadly, the Germans lost three armoured vehicles (a StuG, Puma, and Marder) and a PaK40, but managed to hold off the British armour through sheer grit, determination, a flamethrower and a Panzerschreck. German infantry eliminated the advancing British infantry to a man.

StuG gets hit from behind...

The Paras were virtually untouched, and spent much of the game awaiting a German assault that never came. Why? Because the Germans responsible for the assault had sneakily moved into possession of one end of the bridge, capturing an objective, without contesting the objective on the other end of the bridge. This gave the Germans two of three objectives for a marginal German victory as time ran out. 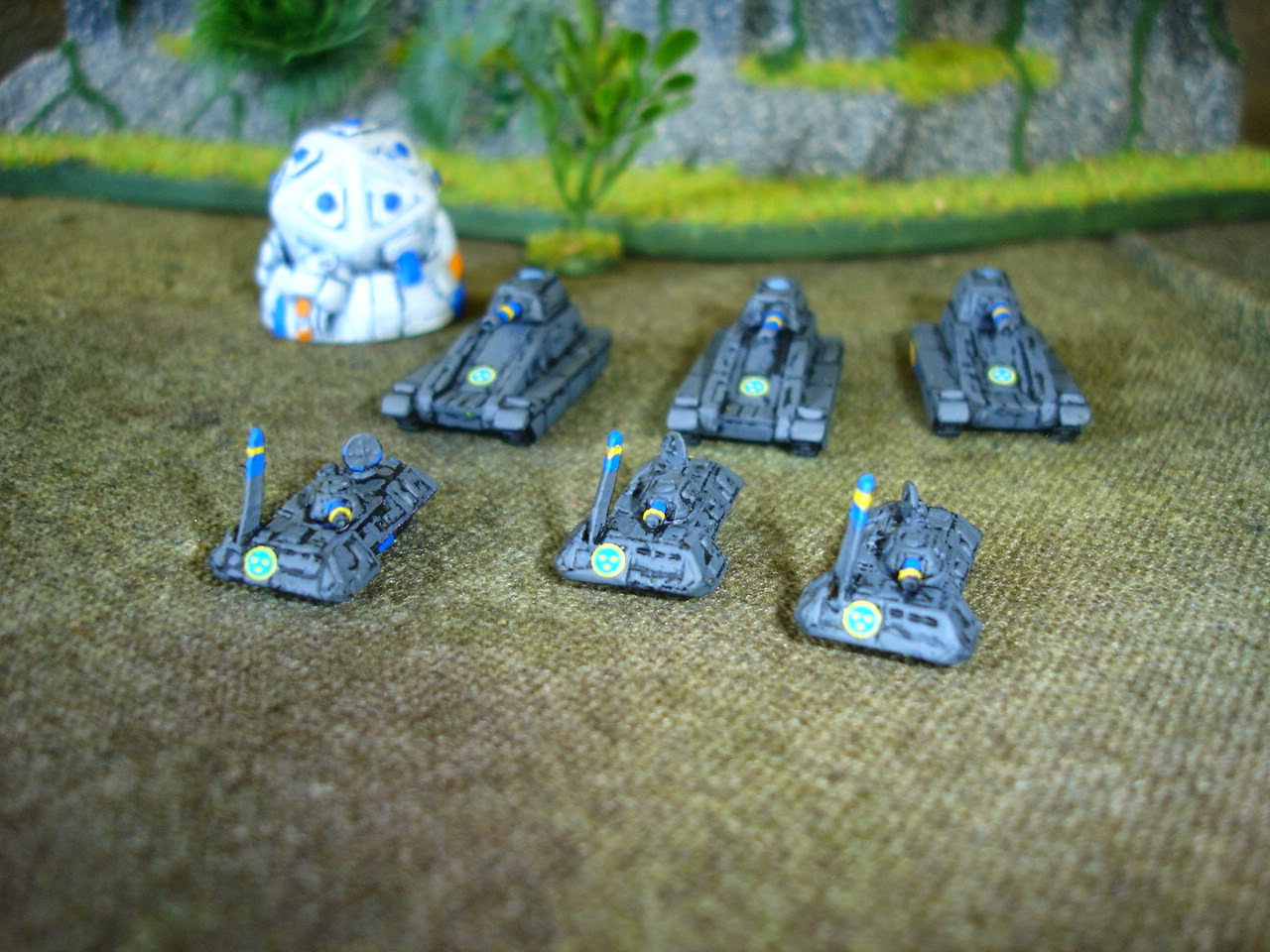 A not-terribly-good photo of the Swedish heavy tanks and light tanks I finally finished. There are three more heavy tanks finished, so I have a light battalion of them (3 light tanks, six heavy tanks) minus the command tracks. Which I own but have not yet removed from the blister.
Posted by J Womack, Esq. at 1:00 AM 2 comments:

Finally, some photos that I can share! These are the first units of human 15mm sci-fi that I have finished. I am planning on using them with Gruntz rules. I also have at least one other human faction to paint (and a few of these guys left), plus another alien faction, and more Chuhuac to finish up. Oh, and I am working on Lead Painter's League, too.

Here they are. These are a unit of notoriously ruthless soldiers, in service of the Sirian Hegemony, the Hegemony Marines. I have some others that are painted up as an elite unit, the "Redcaps," but you can't see them just yet. 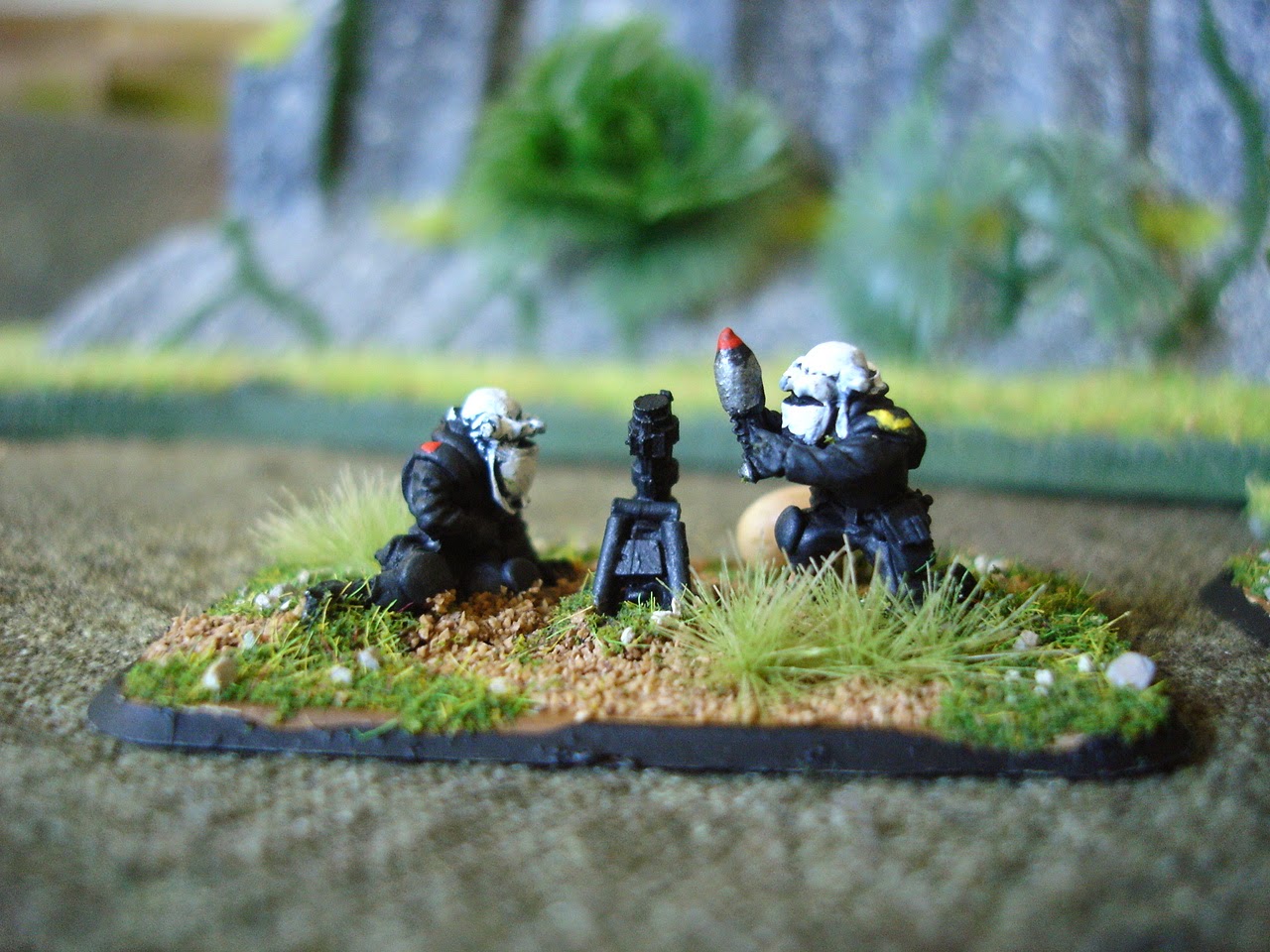 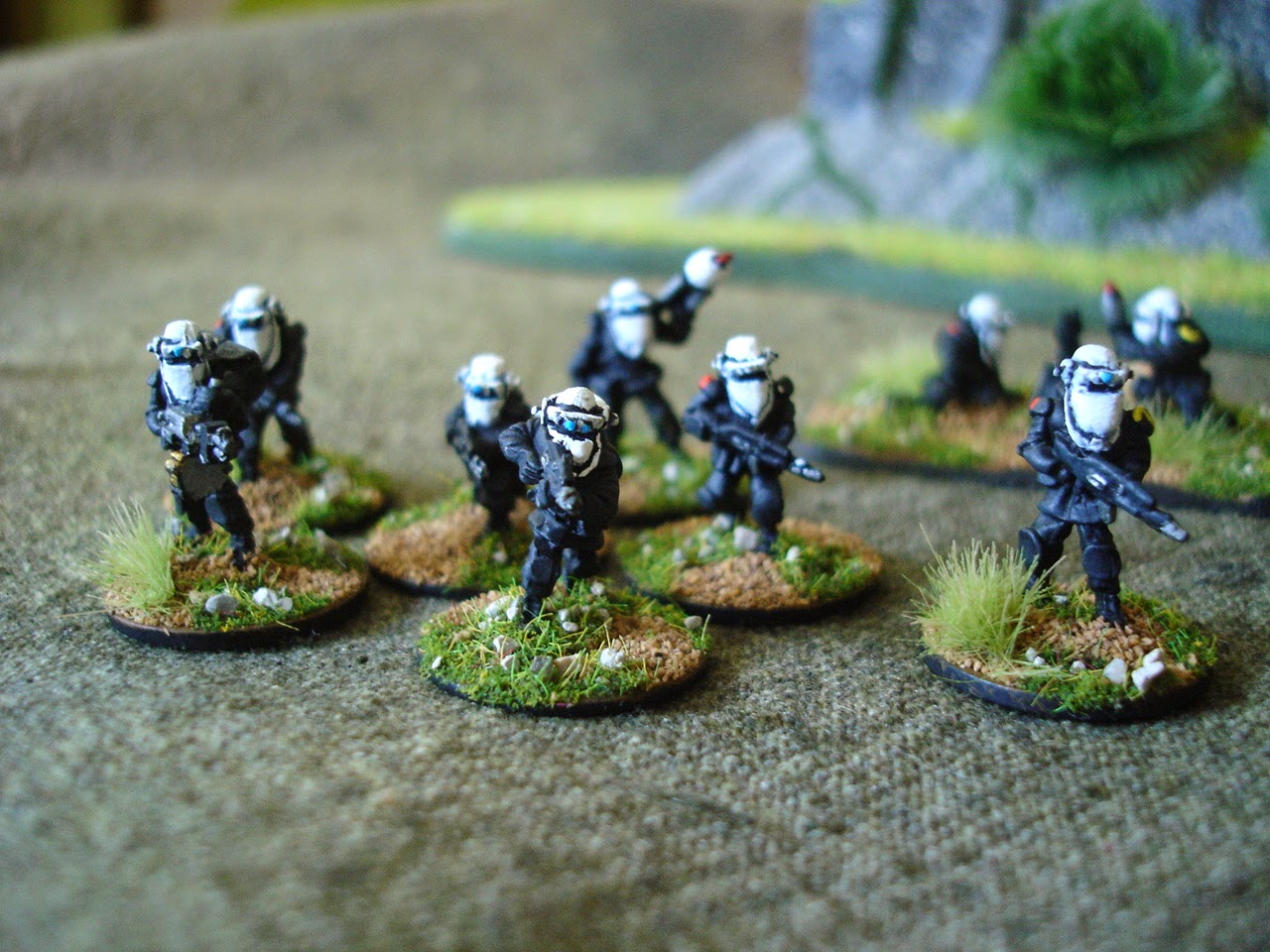 The figures are Khurasan's Control Battalion. I painted them a nicely menacing black with white carapace armour over the upper torso, neck, and head. So far I have two full rifle squads with squad attachments and two mortar teams painted up and ready to go. Working on some command, an FO team, and one more squad. I also have, as mentioned before, one squad of the Redcaps.
Posted by J Womack, Esq. at 10:20 PM No comments:

Over in Germany, there's a little miniatures forum known as the Lead Adventure Forum. In this wonderful place, to which all good little gaming boys and girls should belong since it's free and all, there is an annual competition to determine the Greatest Painter of All Time and Space. Or something like that. If you limit time and space to Earth, in the present day. And if you only consider the painting of groups of small figurines, typically metal, plastic, or resin. But you get my drift...

The competition is a weekly head-to-head matchup that lasts for ten weeks. Forum members (did I mention it's free?) can vote on each pairing. This season there are 32 gladiators in the arena, and I, your humble blogger, am one amongst their number.

Last season, I came in a disappointing 34th out of 40, with only two wins. Most of my losses were well-deserved, but I felt like I could have done better on a few pairings. I hope to improve my record to five wins this season. I'm off to a good start this week (the entries are posted newly every Sunday, voting is open until the following Saturday).

So, if you are interested in little toy soldiers of varying sorts being painted by a variety of painters - some of whom are incredibly skilled - you should certainly check it out. I won't share my username in order to avoid seeming as if I am trolling for votes. I'm not. I just want to broadcast the knowledge about the contest far and wide. 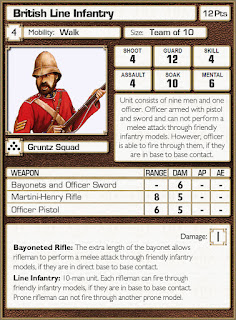 Fjodin has made some really interesting cards for Gruntz rules to bring in VSF or colonial games. You can find more information here. Very interesting. And good looking!
Posted by J Womack, Esq. at 6:30 PM No comments:

And while the eggs are beautiful, and the hunt is fun, and all of that wonderful stuff, please don't forget the real joy of Easter: the Risen Christ, who suffered, died and was buried, but rose again on the third day, in accordance with the Scripture, that all may know that He was truly the Son of God, the Messiah, the Way, the Truth, and the Life. Amen.
Posted by J Womack, Esq. at 12:30 AM No comments: 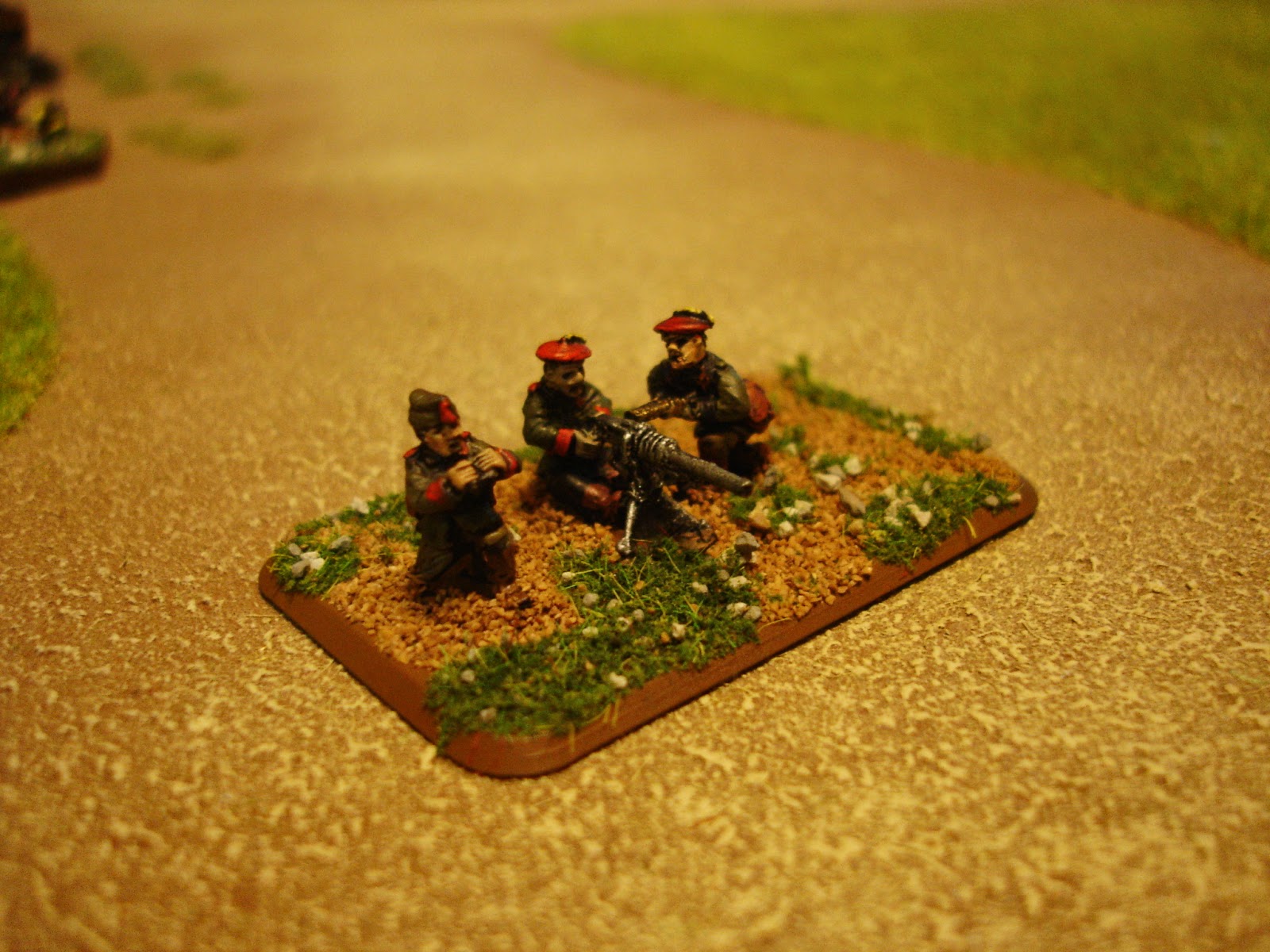 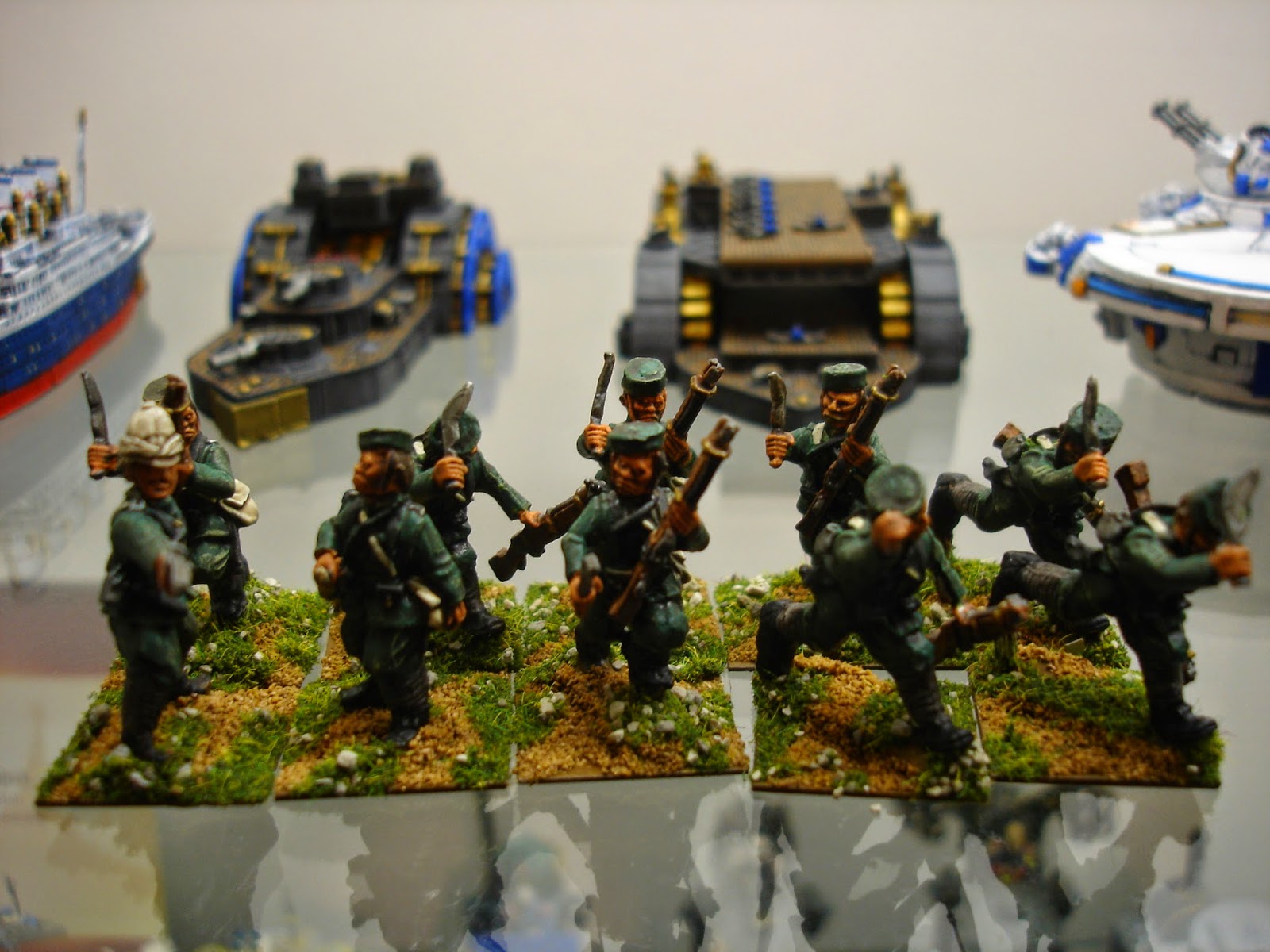 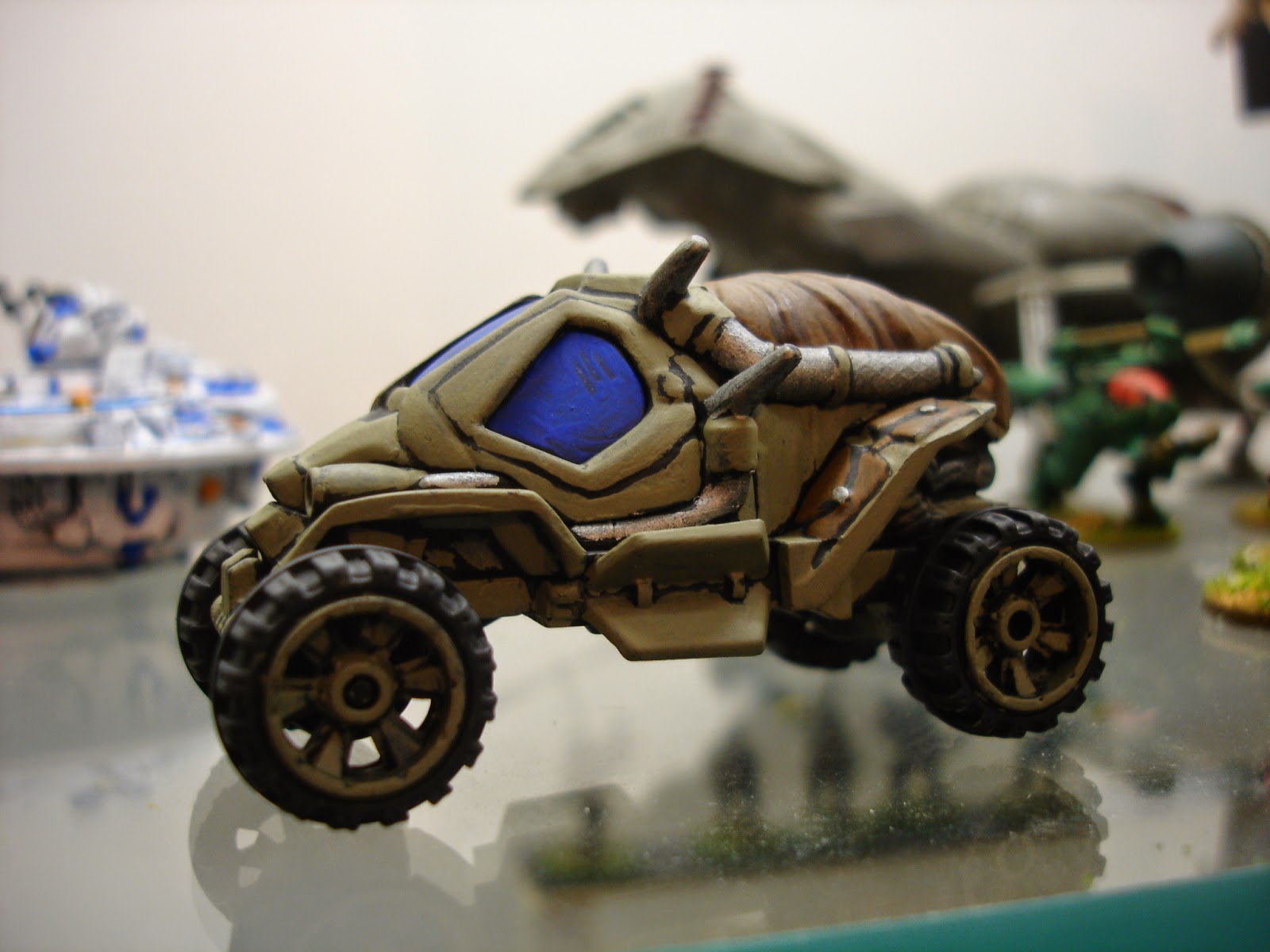 Things are happening around here...

Working on several projects. Lots of Dystopian Wars Federated States ships. Got a good bit of 15mm sci-fi in hand, working on painting it up now.

I promise I will start putting more pictures up.

But first I have to get set for the Lead Painters' League competition. It's on the Lead Adventurers' Forum. I entered last year but didn't do very well. This year I hope to improve on my somewhat sad finish. The first three entries are submitted, and the competition officially starts next Saturday. Please go check it out. Lots of great painting, and mine is there too.

I need to consider what to paint for the Round 5 bonus and Round 10 bonus. Round 5 I need to have some sort of non-equine animal. Five of them. That earns me bonus points. Putting five riders on them gets me an additional batch of bonus points. So I am thinking riders. I have:


For Round 10 the bonus theme is women. I have very few female figures, and what I have got, don't make a cohesive 'team' as required by the rules. So my thoughts are these:


What is the collective wisdom of the tribe?
Posted by J Womack, Esq. at 1:22 PM No comments: