I painted up three planets yesterday for table fluff in X-Wing games. Simple, really, just some styrofoam ball halves and acrylic paints. I even bought the balls already cut in halves. *grin* 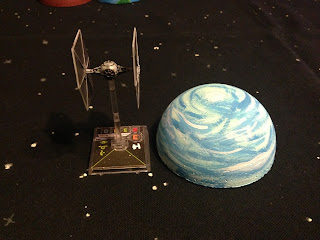 TIE fighter from X-Wing game for scale.
This planet is just blue and swirly. 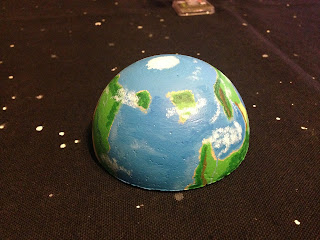 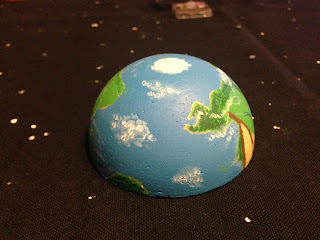 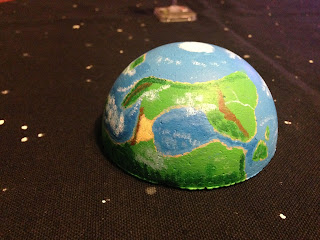 As the world turns... 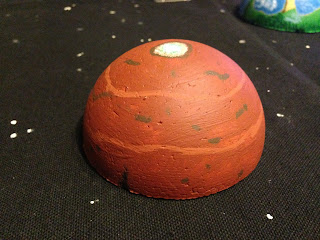 An important planet - source of the spice! 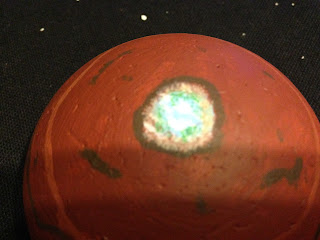 The polar cap of the desert planet. Only place there is water: the molten ice cap. 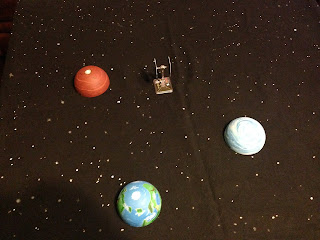 All three planets on my starfield cloth.

I'm thinking about doing three more, since I have three more halves. One will be an industrial hive city planet, covered in city except for some open water. One will be a pink and yellow swirly gas planet. Dunno what to do with the last one. Any suggestions?

Are You a Quitter?

By that, I mean this: have you ever finally just given up on a genre and scale altogether? I have, four times.

I gave up on 15mm Napoleonics because, well, there was simply no point. My friend Tom has literally tens of thousands of figures from all the major combatants of the era and many of the minor ones. And if that's not enough, Marc has a few thousands more. So there was simply no point in my building up a force of Austrians (and going snow-blind painting all of that white-on-white in the process). I gave Tom my few battalions to bolster his forces, plus a hundred or so unpainted AB miniatures.

The second was also Napoleonics, but this time Age of Sail ships. I played a game of Close Action about 17 years ago with Jeff Hunt (?) who made (and still does, I believe) 1:1200 (?) scale models of the ships. It was a lot of fun. I bought a few ships and painted them. Bought the rules. Never played them again. Finally gave the ships away (Game it Forward!) at a Historicon about three or four years back to a fellow TMP member who thought he might use them. The rules are still in their box, on the shelf.

I gave up on Warhammer Fantasy a long time ago and gave away large sections of my High Elf army. This would be about 1995. Then I got back in and bought Bretonnians and Lizardmen in a boxed set. Sold off most of the Bretonnians about seven years ago, still have the Lizardmen (for VSF). Now I am back in again, slowly building an Empire army (as in, for the past five or so years and yet to play a game) and determined to ignore the existence of the Age of Sigmar.

I also gave up on Warhammer 40K and ditched my Eldar. Sold for a pretty penny, as I had some things that were not common even then, old Rogue Trader stuff like Harlequins, War Walkers, Dreadnoughts, and the gun teams. I also had the first iterations of the Aspect Warriors, one unit of each to stiffen up the Guardians that were the mainstay of my army. It's been so long I am not even sure which Craftworld they were supposed to be defending. Aliatoc, perhaps? Blue and yellow, at any rate.

Technically, all my other projects are still 'on the boil.' And that's a lot of projects, in terms of genres, scales, and forces. Oh well, better than wasting my money on women and whiskey, right? I know my wife prefers it that way...
Posted by J Womack, Esq. at 5:48 PM 2 comments:

Panzerfauste is making an armored bear.

And here are photos. 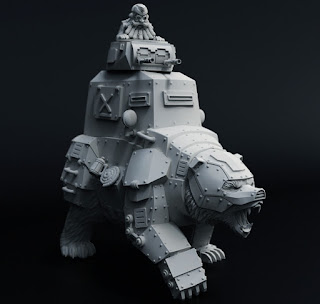 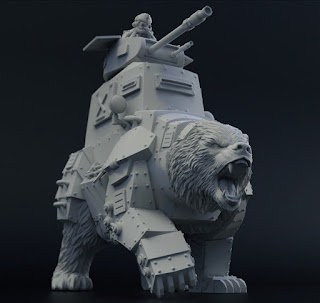 Two turret options available. Personally, I like the two MG (Pz I) version. You can also opt to go with a closed turret hatch, which I like. I'm not in love with the German Dwarves, but this guy is cool.

You know, considering how much I like bear figures, it's a bit odd that I don't own any.
Posted by J Womack, Esq. at 2:46 PM No comments:

Well, the holiday scramble is over. The gifts are all done. The travels all accomplished. It's been very busy and I haven't done a lot of game-related activity at all. Is this news to anyone out there?

I did get a few nice toys at Christmas, specifically the Millennium Falcon and the Tantive IV for Star Wars: X-Wing, along with another A-Wing and another TIE Interceptor. A fair number of books (not really game related, however). For my best friend and my sons I purchased the Fantasy Grounds software, which I am still working at setting up on my end. This will allow us to play D&D online with one another, as we are geographically scattered.

Just returned from yet another cruise. We like those a lot, we certainly do. Before I left, I did something drastic: I cleared off my painting table of all projects, completed and otherwise (mostly otherwise). I am going to do some re-evaluating and prioritizing here in the next week or so and consider the next step for this new year.

One decision to be made is regarding the Lead Painters' League. I have participated for the past two seasons, and performed rather marginally, to tell the truth. I am seriously reconsidering my participation this year, as I know I have no realistic chance at even a top ten finish, and that discourages me from wanting to paint, I think.

I need to decide which project to push forward with first, as well. I can either try to finish up a couple of more units for VBCW in 28mm (Republic of Wales) or try to complete my 15mm Spanish Civil War forces (Nationalist Carlist requetes). I've also got some Afrika Korps 15mm which I have just about determined to pay someone else to paint for me. But after a good start, the last four or five months of 2015 saw some fairly dismal painting results, both in quality and quantity.

Continuation of The Aethergraph. Last year saw not one issue released, when I had hoped for at least three. Partly that was my not concentrating as much on Victorian Science Fiction gaming, but partly that was just the well running a bit dry creatively. I'm simply running out of ideas of my own to include in it. A few brave souls have aided me with some articles and I am very appreciative of that assistance. It even got a mention in a professional magazine (which was very cool). But the latest issue is languishing incomplete.

I am expecting a game of Arkham Horror this week, which will be the first official game of the new year for me. Hopefully it will help stoke up my gaming fires.
Posted by J Womack, Esq. at 10:56 PM 2 comments: