All right then, you've all been waiting with baited breath I am sure to see how I did with my not horribly ambitious monthly goal for February, instated about a week ago. And, as of 2145 in Houston, by God Texas, the results are in - seeing as how I have decided I am done for the night, and it's the 29th.
Drum roll, please... (rat a tat a tat a tat a  rat a tat a tat ...)

Even though I did not totally finish two of the three projects, I am still pretty happy with my progress. On the Zulus, I got all of the loose Zulus based, flocked and clear coated. That's 81 of the total 101. I have 20 more that are already on square wooden bases that need to be removed and then attached to the small washers I changed to in mid-project. So, that will be at the top of the order for next month's goals, which I will post tomorrow.
On the Indian Rifle Company squad, I have all 10 painted and, in addition, I got the Platoon Command Rifle stand painted as well. Just need to base them and clear coat, and they will be done. So, 90% of the goal completed, plus some extra figures as well. I also have the mortar team and Boys ATR team about half painted up.
Posted by J Womack, Esq. at 9:56 PM No comments:

Just a quick rundown:
In addition, I have been working on some more FOW Indians (the Platoon Command, 2" Mortar and Boys AT Rifle) and a few more 6mm Brits. Best part is, I am enjoying myself.

And for those of you worried about my using GW paints, let your heart not be troubled. I borrowed the appropriate Vallejos from a buddy (thanks, Zach!).

On a totally separate and not-gaming-related note, my pool finally passed final city code inspection. Now we can fire up the heater, clean the pool, and get in the hot tub by the weekend, I hope. Good day!
Posted by J Womack, Esq. at 11:07 PM No comments:

After the whinge-fest I indulged myself with on Friday, I thought I would Do Something About It today. The results were favorable, for a first day of getting back on the wagon. 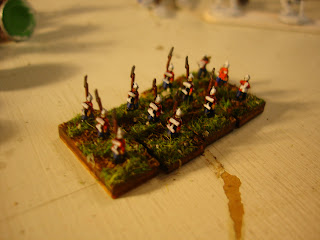 6mm British Battalion
The Zulu Basing Goal stands at about 41% completed. That is, I have 41 out of 101 totally done. Yes! I like that. The other 60 are in various stages, so I suppose I could claim that I am further along than 41%, but considering that 20 of them need to be removed from their old bases first, and that I am out of superglue to attach to the washers right now, I am going to go with only what is actually done on this goal. But a 25% jump from yesterday is a good start, I think.
The Indian Rifle Squad Goal is now about 15% done. I have most of the base coat down on the MG section, but I thought I had a Rifle section with NCO primed. Wrong! Had to clean up another Rifle section and get it primed. That's done now, though. I might do the Platoon HQ base as long as I am after this. But I do have one major problem: lack of two paints! And the LGS does not carry Vallejo - I've asked, they are basically a GW pimp. I suppose I could prostitute my love for Vallejo and just get the equivalents in GW pots, but that hurts. So a start, but a good bit to go still.
The Steamtank Turret Goal is almost done, call it 95%. Just waiting on that superglue to attach the gun barrel to the turret front, then I can spray the whole tank with Testor's ModelMaster dullcote (my clear coat of choice these days) and it will be table ready at last. 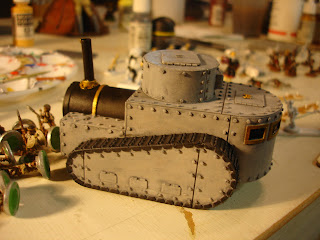 Ironclad Miniatures Steam Tank
In addition to the above, I also finished off a Warrior Priest for our WFB Empire army, and the first battalion of 6mm British for my long-stalled 6mm When The Navy Walked project (top photo). 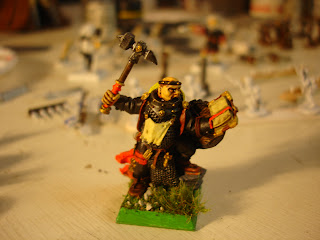 In all, a good day. I think though, that instead of instituting monthly goals, I might want to do weekly goals instead. Shorter range, more targeted. Something I want to think about at least.
Posted by J Womack, Esq. at 11:11 PM 1 comment:

I still like OGRE. I have been (slowly) working on building up some 6mm forces to play OGRE Miniatures. So this may be good news on that front...

If you read my VSF blog, Victoria's Boys In Red, this may look familiar. But I promise it isn't a mere repost. Even if it seems very similar.
Really.
One of the things I have been upset with for the last year or two is the lack of progress I have been making on my (far too many) gaming projects. I have let that get me down, and that has led to me not feeling like doing anything. In other words, I am not doing anything because I feel bad that I am not doing anything. The strange effect of the doldrums, I know, but there it is. I think the sentiment is a common one in our hobby. I know I have talked about it with Eli and some of my other gamer friends.
I think it might help to set specific, achieveable, short-term goals, rather than having innumerable, never-ending 'projects.' So that's what I am going to do. It may not be as glamourous as the sweeping flights of creative fantasy that I have posted before. But it may get the creative juices flowing again.
Here's the plan: by the end of February, I want to have done the following:
Not much to start with, but there is only about a week left. I will be very happy to accomplish these goals in that amount of time. If there is any time leftover, I want to knock out a pair of WFB gunners for the Empire Great Cannon.
Anyway, I plan to keep updating here and on VBIR. Maybe this sort of thing would help your projects progress as well.
Posted by J Womack, Esq. at 2:05 PM 1 comment:

Woohoo! It's on Netflix Online! The boys and I are watching it. 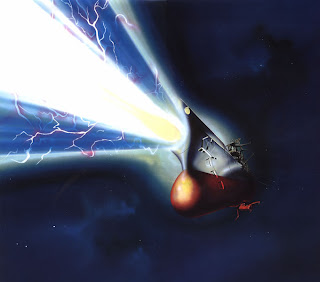 I would have started every battle with the Wave Motion Gun.

Derek Wildstar. Posterboy for whiney so and so.
Posted by J Womack, Esq. at 8:09 PM 1 comment:

it be kicking my butt.

Sir Sean, in all his glory. 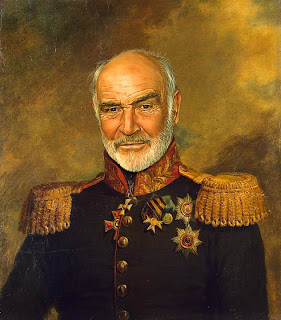 Found this on Facebook. How awesome is this?
Posted by J Womack, Esq. at 7:30 PM 3 comments: