Last weekend the Clear Lake Area Wargamers Squad (CLAWS) kicked off our North African campaign using Flames of War. We managed to get in six games and rolled off the unfought battles for the turn, including an unsuccessful LRDG raid. Darn it. Overall, the first day went well for the Axis, unfortunately, but in our second turn... I predict the Allies will surge back. Personally, I lost a 4-3 and won a 4-3. So pretty close on both fronts. 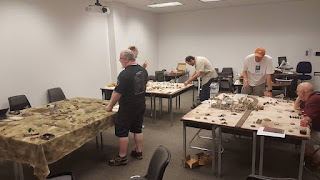 A shot of the room. Three tables in play. 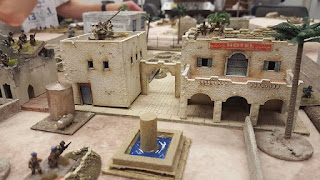 Some of Gerald's amazing Algerian terrain. 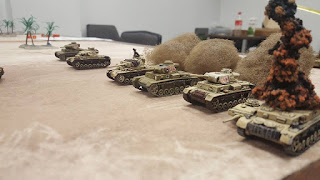 A sight to warm the cockles of every Desert Rat's heart: Jerry tanks brewing up. 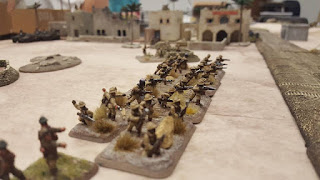 Some of Gerald's Vichy French (Senegalese, I think).

I have a British Indian infantry company as my base force, with a variety of add-ons. I made the mistake of choosing to use a special rule in my first game which allows me to attack at night. Unfortunately, my opponent had fielded a German Pionierkompanie, and they can hold like the devil. The night-time also kept my air off the table. Plus, he rolled a freaking Tiger I-E as his Firestorm unit (we are using a modified Firestorm Bagration ruleset), and I got a platoon of Crusader IIs. Not a fair trade. Ah well. It was still an interesting game.

In the second game, my placement of artillery left something to be desired. Zach's Panzers almost made mincemeat of them, and did kill off the staff team and one gun crew. He also took out my only real armour on the board, a platoon of Grants. I did enjoy machinegunning down a platoon of his infantry, trapped in the open, with a patrol of India Pattern Scout cars, aka lightly armoured mobile MG nests. A separate patrol did fine work against his anti-air platoon as well. In the end, I managed to stave off defeat because we ran out of time. Otherwise, it might easily have been a 4-3 loss in my second game as well. I might have been able to keep the objectives contested long enough to pull off a victory. Maybe.