Today marks the start of my 44th solar circumnavigation. No big plans for the day, just some breakfast with my wife and both sons (Greyson is back from college this weekend), some time at the gun show in Pasadena, and some quality paint table time. I've just about finished several items.

I'm feeling blessed today. I have a good, reasonably healthy family, I love my work, I have friends (both local and online), a comfortable home, and a hobby that I enjoy.

Last Saturday was the regular third Saturday meeting for my local games group. While we tend to concentrate on historical games like Flames of War, or Koenig Krieg, or Fields of Glory, or something like that. Occasionally we branch out from that. I have brought a VSF game on a couple of Saturdays over the years, for example.

This week, Brian Weathersby (is that right Brian? I always forget names...) brought a playtest set of rules for a racing game that he is helping to develop. Rather than join in on the Hungarian/Bulgarian midwar deathmatch being played by some of the others, I sat in on this game, called Win or Go Home.

Part of the reason I chose to do this is that my son Dane had played the game at OwlCon a few weeks ago and had told me how much fun he had. I thought it sounded like a nice change of pace, and found that it was.

The rules have a sort of base set and then modifications for different types of racing. We played NASCAR, but I know he has developed Formula I for two eras - "classic" from 1950s to 1980, and "modern" from 1980 to present. They are in playtest, so we (Buddy Brewer and I) made a couple of suggestions during the course of the game that may be in the final rules. So pretty neat, too.

We each took two cars. I had the #17 DeWalt car and the #44 Corn Flakes car. I know that Brian is on the lookout for a Laughing Clown Malt Liquor car, so if you know where one can be located at a reasonable price... let me know.

I took a few pictures and a short video... 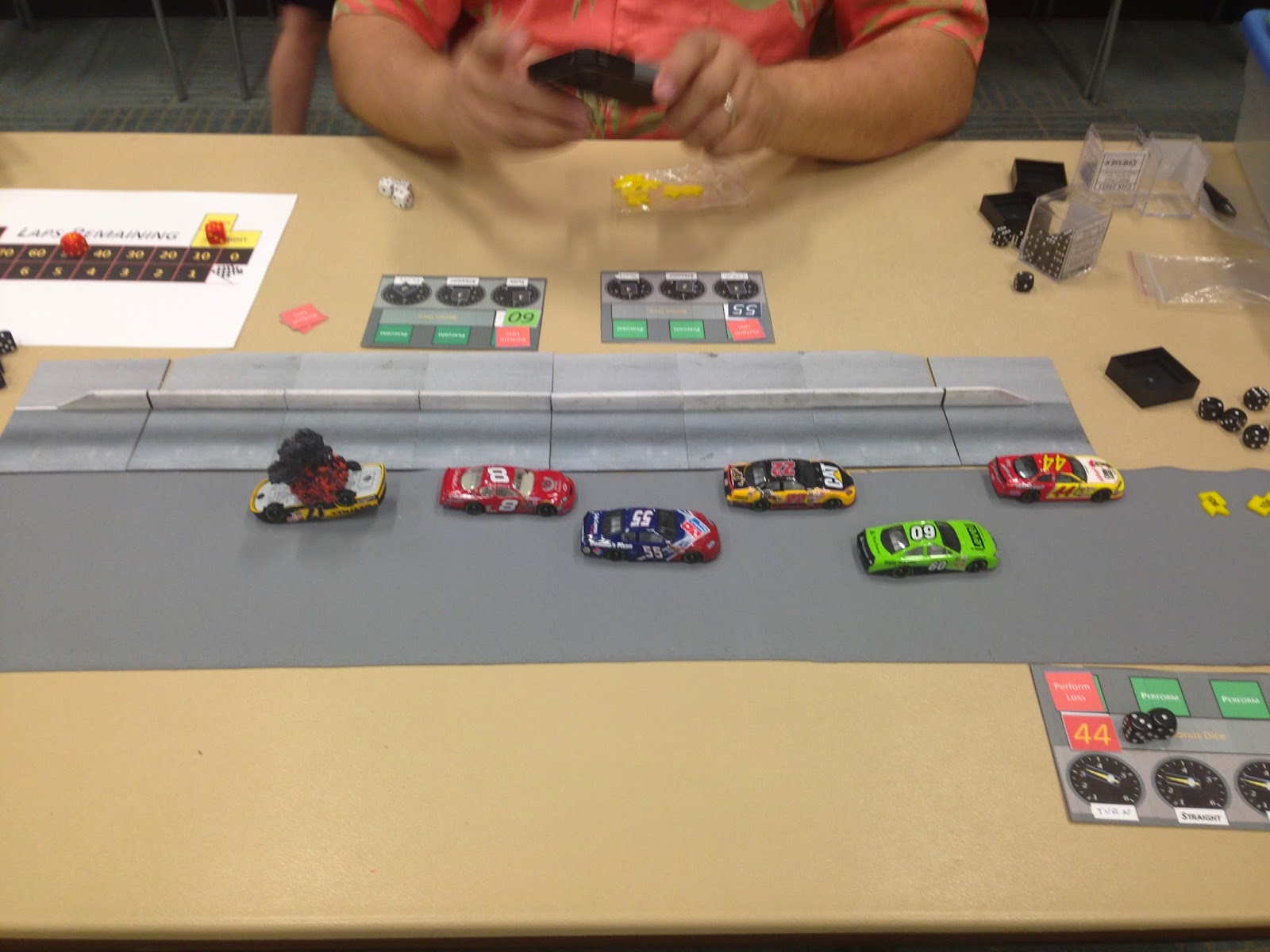 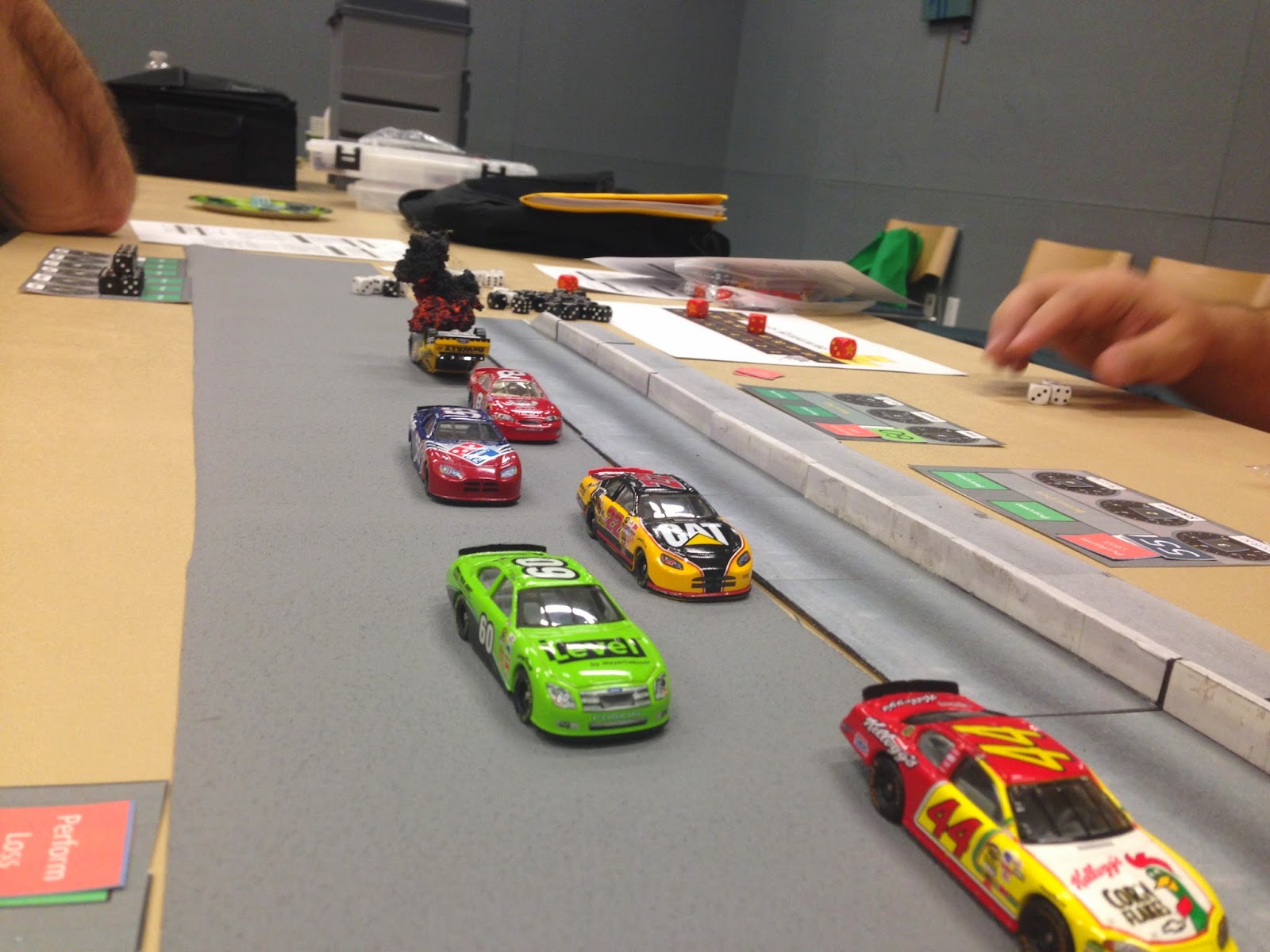 Long story short... I really enjoyed the game. As my son said, it was sort of like watching the highlight reel of a race.

So my buddy Zach came over this afternoon and we played some Dystopian Wars with my Prussians and my new Federated States of America. 720 points per side. We used the 1.1 version of the rules, because that's what we have. 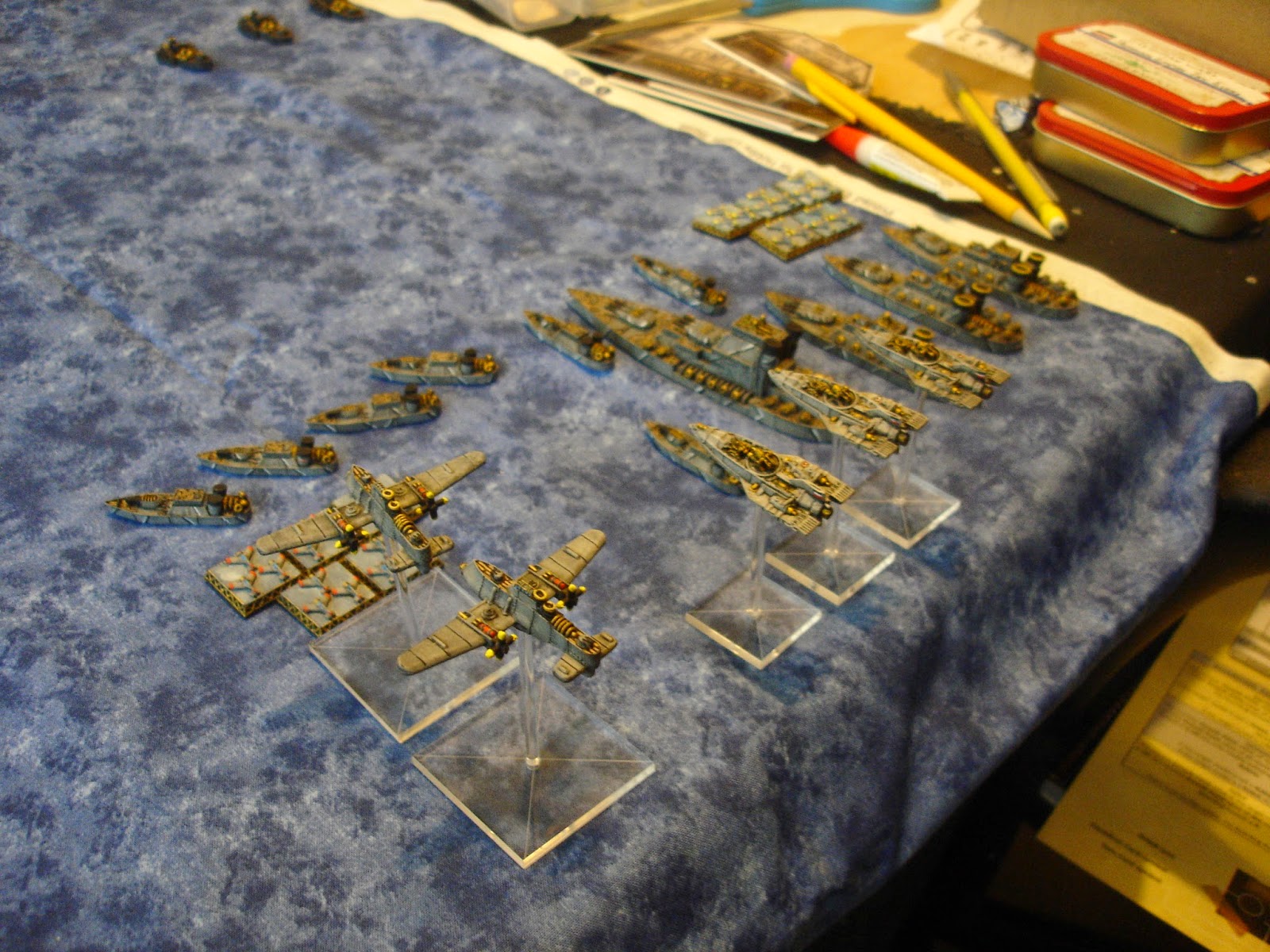 Prussian fleet at the start. 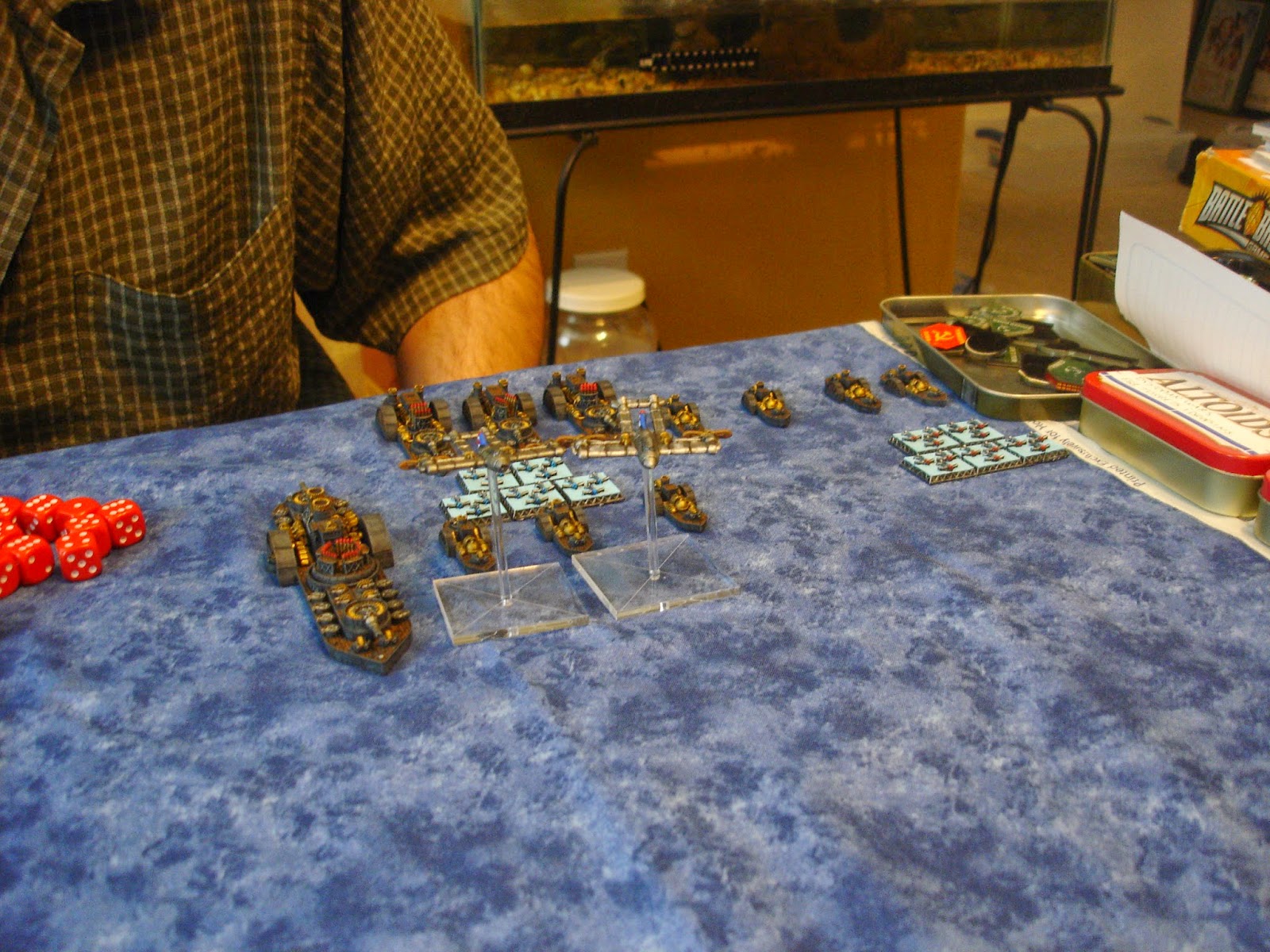 FSA fleet at the start. 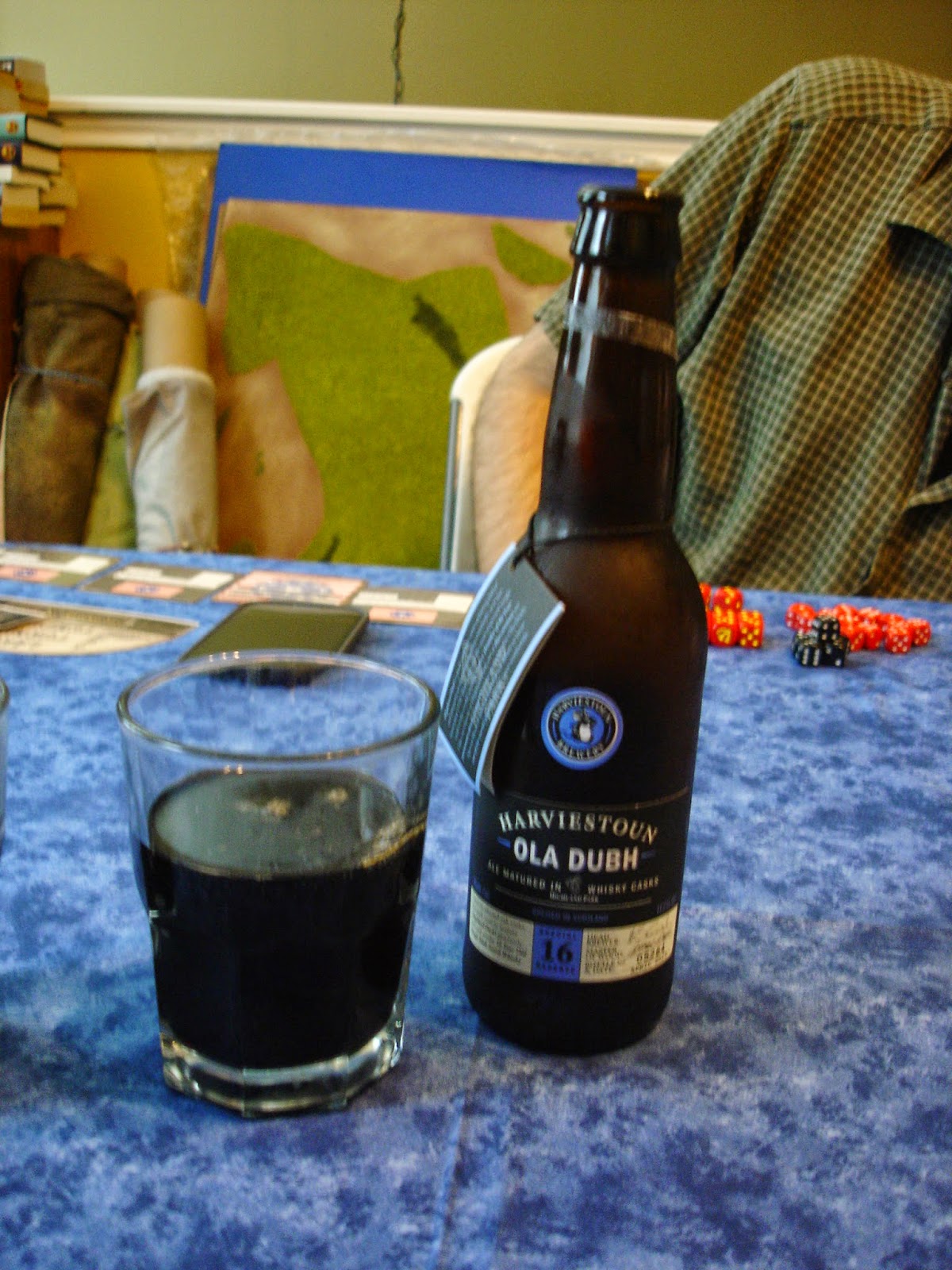 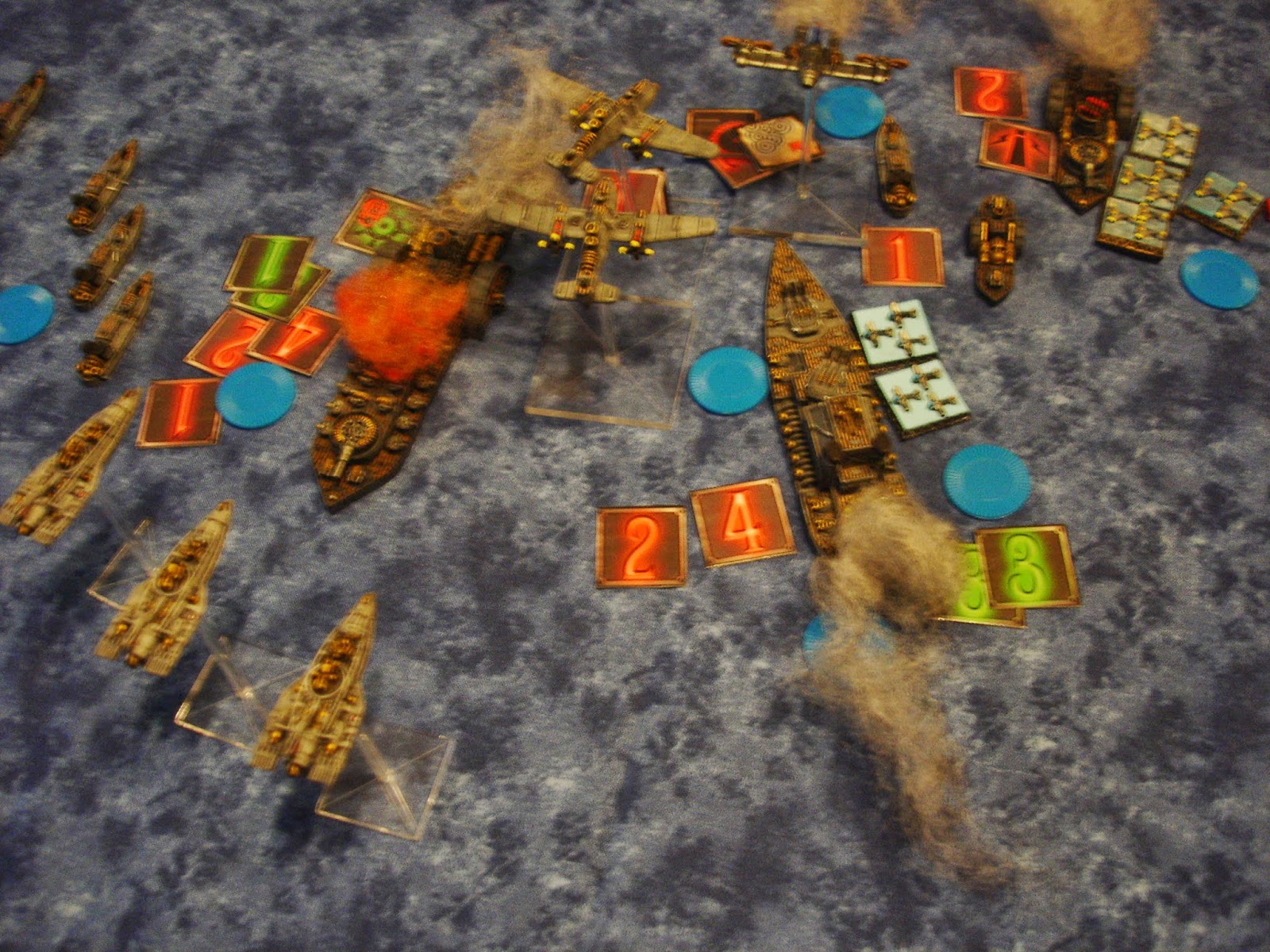 The Aftermath. The FSA battleship is sinking. 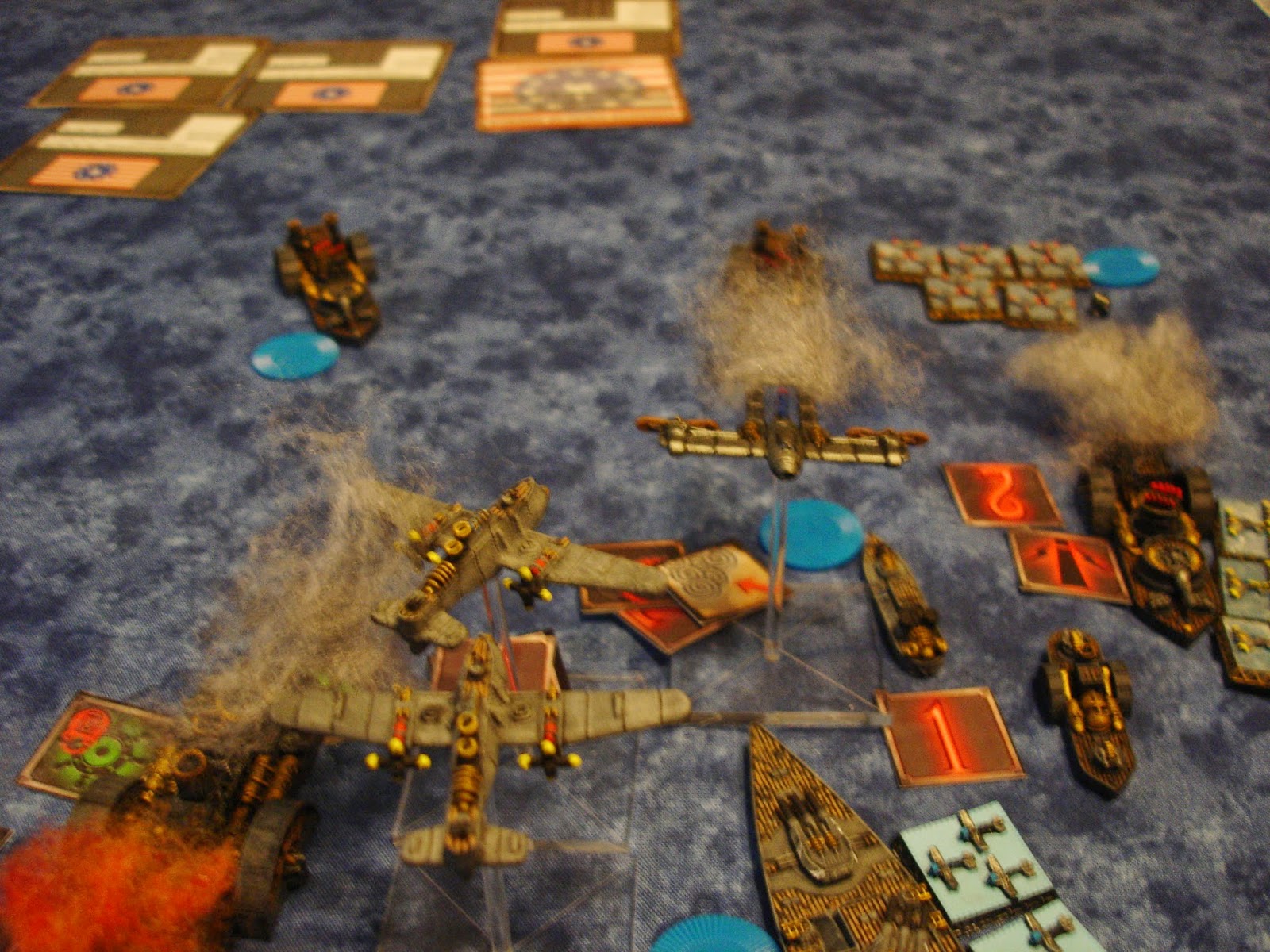 Lots of smoke pouring out of the damaged ships and aircraft... 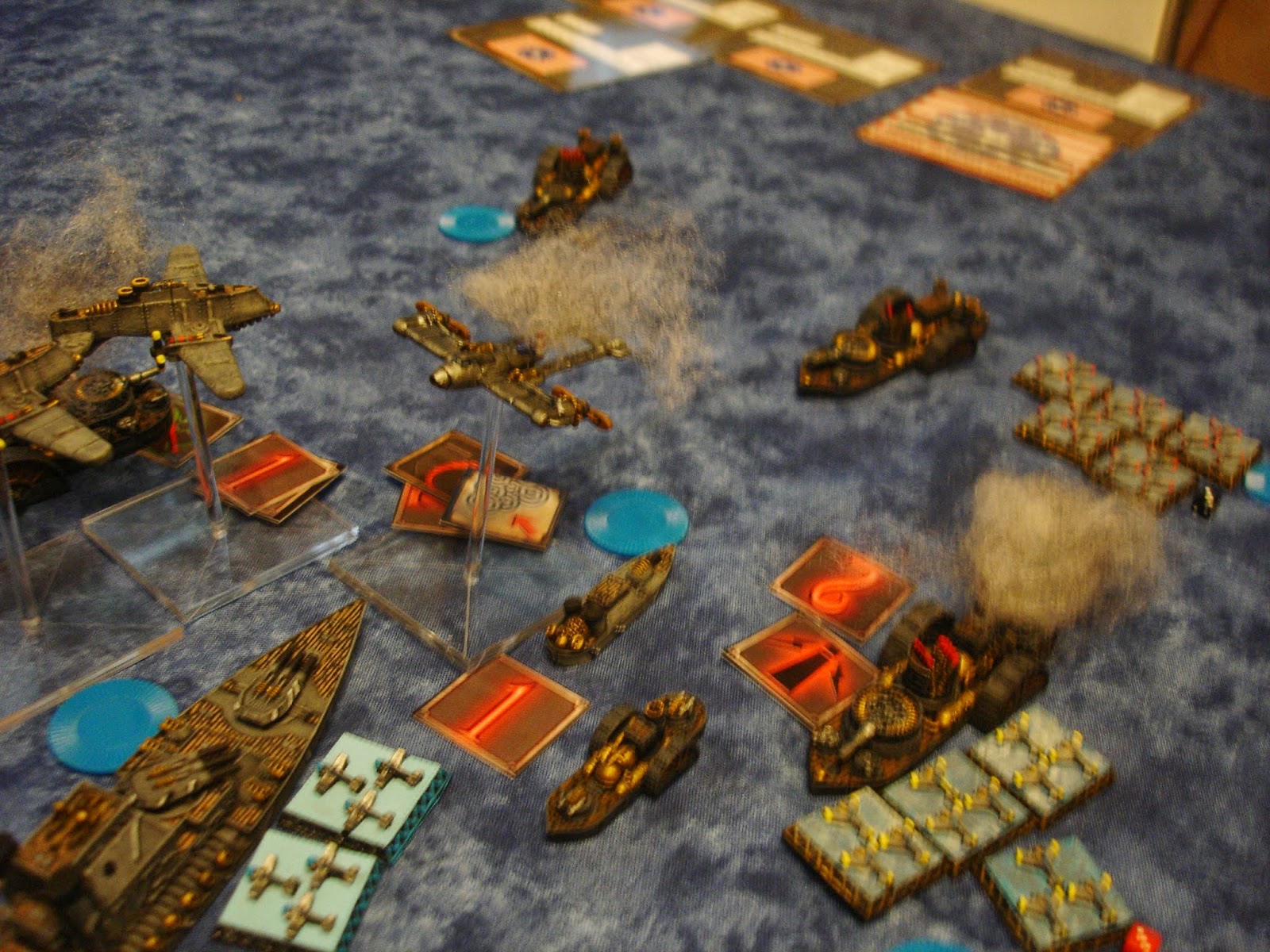 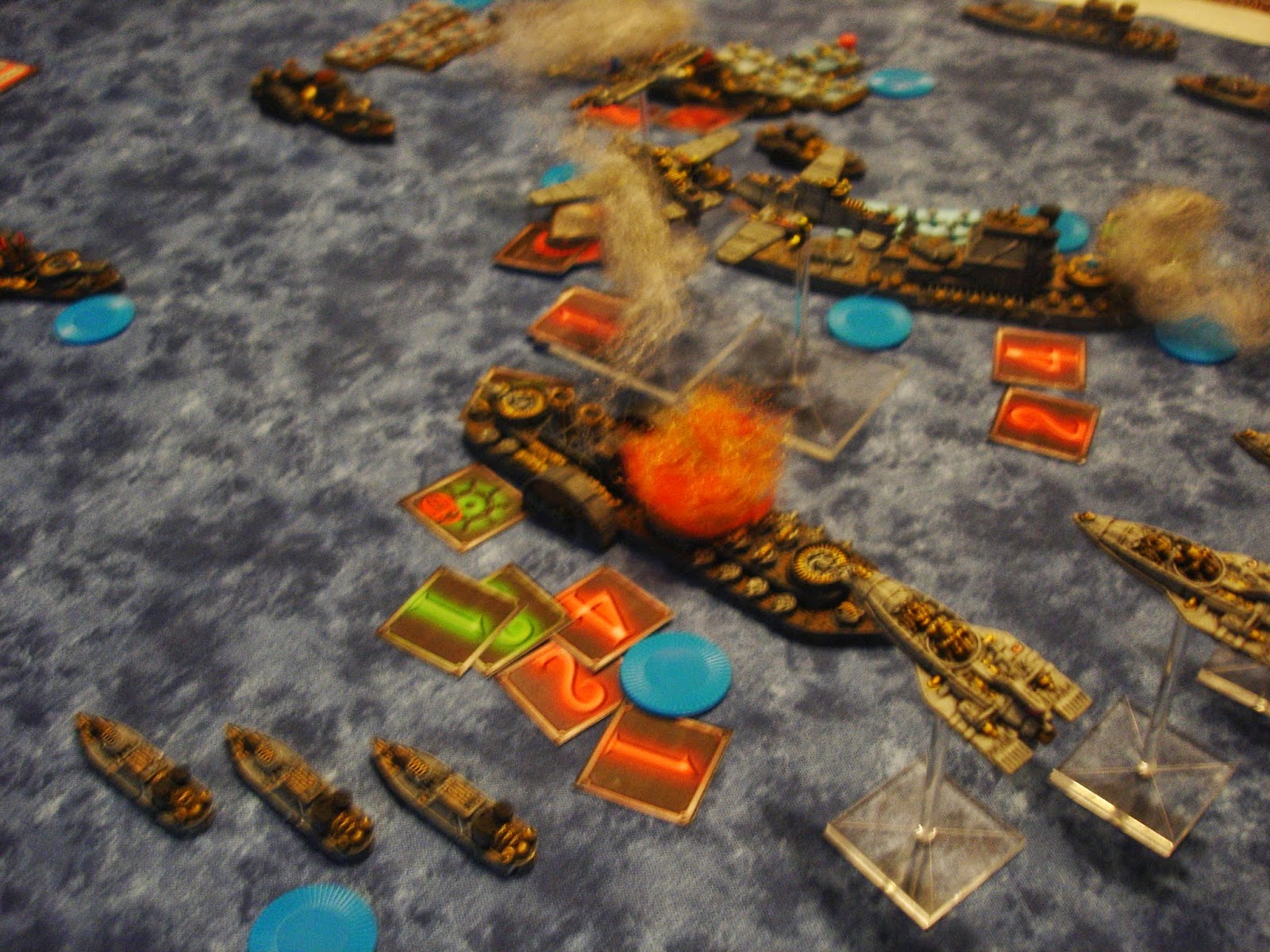 I didn't record everything for the blow-by-blow report, so this report is mostly the score. I rolled very well; Zach did not. The game lasted all of two full turns. Very bloody. 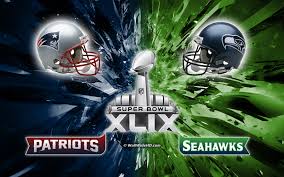 I must have been vaccinated, because I couldn't give a rat's arse about it.

I'll be spending the next four and a half hours enjoying a good movie, dinner, and some painting of 15mm Chuhuac figures, for which I believe I have a color scheme worked out. I need to check the rules of Lead Painters' League to see if WIP shots make a mini ineligible for the competition. If not, I will post some shots soon.

However, speaking of dinner, my stomach is starting to think my throat's been cut. Time for some grub.