Kickstarter: Empire of the Dead

Good Lord, I am getting a boat load of stuff from this thing. About 54 miniatures, if I calculate it right, plus rules and tokens and some conversion bits (weapon sprues), all for about $190. Including shipping from the UK to Houston, By-God-Texas.

See more details, including artwork from West Wind Productions, over on Victoria's Boys in Red.
Posted by J Womack, Esq. at 10:26 AM No comments:

Wonders of technology. I am posting from the middle of the Gulf of Mexico aboard Carnival Magic.

You won't hear from me again, probably, for the rest of the week. Unless the weather in the Bahamas or the Gulf really sucks.

Catch you gents on the return.
Posted by J Womack, Esq. at 11:58 PM No comments:

My wife got me an awesome minis carrying case from Dave's Baggage Train. If you recall, I got an aluminum case from them a few years ago, but it is just about an inch or two too large for carry-on luggage, so I asked for a smaller, more airline friendly one for my birthday this year. This one holds twelve inches of trays. I think I had it loaded with 2x 1.5" deep, 1x 3" deep, and 3x 2" deep. Each with foam and magnetic insert in bottom. Yeah, she's awesome. 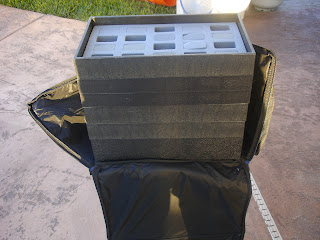 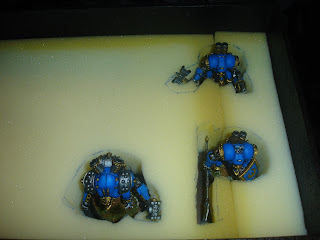 A little custom foam cut for my Cygnar Warjacks.
A 3" deep tray. 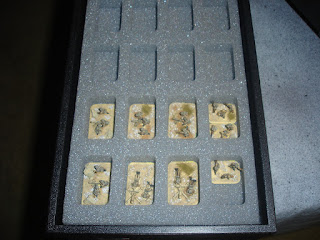 I got a bit more painting done in the last week. The most interesting bits are a pair of 2-pdr portees for my Indo-British North African forces. In the early part of the war in North Africa, there were not enough armored vehicles. To make the 2-pdr antitank gun more mobile, they were adapted to fit in the back of a cutdown truck. These so-called 'portees' combined mobility and firepower, but were very vulnerable to return fire. 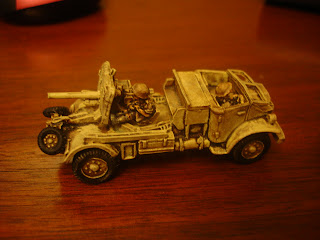 I didn't try to cram the whole crew onto the back because it looked too crowded. 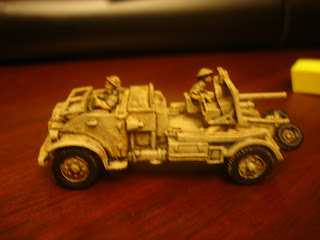 A little blurry. Sorry 'bout that.

I also painted a 15-cwt truck and a 3-ton lorry for a motor rifle company. 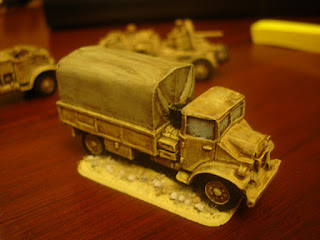 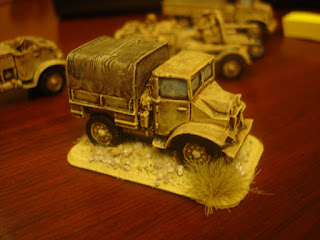 I am almost done with my six India Pattern Carriers. They just need some drybrushing and the driver to be added into the seat (right hand, please - they are British subjects, after all!). After those are done, I want to tackle the three jeeps and the last two lorries.
Posted by J Womack, Esq. at 6:30 AM 2 comments:

Five brave hopefuls strapped on their body armor, tightened their seat belts, and roared into the arena for another Amateur Night autoduel contest. Upon signing their waivers, each contestant was provided with a stock Killer Kart II from XCIV Motors, a real Division 5 contender. The lineup was:


As is typical in Division 5 events, the action was fast and furious. The duel had gone on for a mere four seconds before the first car was eliminated. Nathaniel "the Kid" Maloney pounded young Greyson "Biscuits and Brisket" Womack's left side with machine gun fire before ramming into the side of Greyson's wounded vehicle at forty miles an hour! Greyson was saved by his body armor, but his vehicle was so much scrap as his unconscious form was removed for hospital treatment. Score one kill for the Kid! 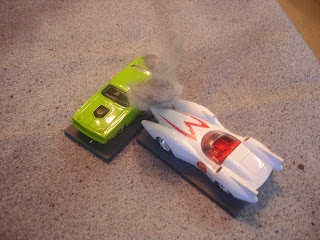 The Kid rams Biscuits and Brisket in a T-Bone!

At the other end of the arena, a three-way struggle was developing. The Professor took careful aim at the right hand side of "Deadly" Dane's Kart, peppering it with a few rounds but failing to penetrate the light armor. "BQ" Maloney ripped a fusillade off at the Professor, but only chewed up the tarmac. Deadly Dane completed the circle of fire by blazing away at the BQ, but his shots went astray as well. (No fans were harmed by the stray rounds - our stands are protected by Perspex Brand Armorglass. When you need to see, and not feel, choose Perspex!) 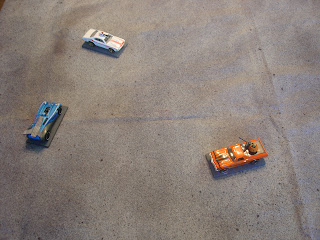 A circle of shots.

The Professor concentrated his fire on the wounded side of Deadly Dane's kart. A second round struck home at point blank range, chewing through the remainder of the armor on the right side and causing sparks to fly in the powerplant compartment. 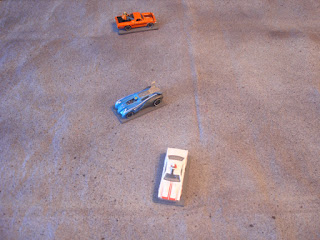 The Professor maneuvers deftly through the traffic...

In the collision, the Kid had wrecked his own front end, including destroying his machine gun. Seeing this vulnerability, Deadly Dane swung about to fire right down the Kid's unprotected front end. Meanwhile, BQ Maloney was trying desperately not to ram into the reinforced concrete walls of the arena, and the Professor swerved around again, aiming for the already damaged right side of Deadly Dane. 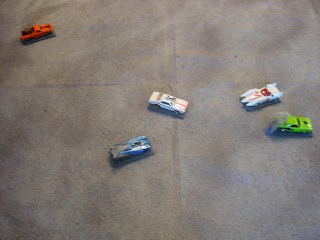 At this point, the duel was called off due to technical difficulties in the arena. All participants (except for the Kid) are being rescheduled for the next Amateur Night competition. What car will they be provided? Only time will tell!
All autoduels and races at the Texas City Arena are carried out under the strict safety guidelines set forth by the Republic of Texas and the American AutoDuel Association. Rebroadcast of the event without the express written permission of the AADA and the Texas City Arena, Inc., is prohibited. Penalties in the Republic of Texas include fines of up to $10,000 and sentences of up to ten years at hard labor.