In case you don't follow my VSF-only (well, pretty much only...) blog, I thought I would repeat here: the second issue of my little VSF e-zine is now available, and still totally free! Which it will continue to be for the foreseeable future, as I see no real future in trying to make a professional publication out of what is essentially a niche fanzine.
At any rate, you can get it directly here, or from the link on Victoria's Boys in Red.
As always, I am seeking submissions for the next issue, which I hope to have out by Thanksgiving. I am especially interested in artwork or roleplaying submissions, but miniatures reviews, battle reports, fiction... pretty much anything steampunk or VSF-inspired would be appreciated.
Thanks again for your support!
Posted by J Womack, Esq. at 7:05 PM No comments:

Declare thyself: For King or Parliament?

Well, they came in today, finally! I received a lovely package from the guy in the brown shorts, containing two books: the core rules and the Wars of Religion companion. I've been looking forwad to these rules for a good bit, ever since I learned they were being made back in the Spring. The local gang I play with has been going through FOG Boot Camp for Ancients and Medievals for about six months, and we like the rules.
While at Historicon this past year, I played a single ECW game, and though I really like the miniatures and such, the rules they used were not fun to me. They may have been an accurate model of battle in the era, but dull ain't in it. I mean, you basically could not remove any enemy troops, even when you catch fleeing troops from behind with cavalry! They just got to run further, and you had to follow them, until one or both of your units ran off the table/battlefield. Yawn!
So now I only have to decide which army I want to get, and how I am going to pay for it! I am torn between the Swedes of Gustavus Adolphus and the German Catholic armies commanded by Tilly, et al. The Scots Covenanters look interesting as well, but I think my friend Gerald will have them covered. Another friend, Zach, is considering the Late Imperial Spanish, and the last hurrah of the tercios. No idea what the other fellows are contemplating, if anything. Cavaliers? Roundheads? Egads, the French?
Posted by J Womack, Esq. at 10:13 PM 1 comment:

The genesis of this post lies here: My New Favorite Cheese.
My friend Eli at I See Lead People mentioned having discovered a new cheese in the previously mentioned post. It got me thinking about eating and gaming. Both are (or at least can be, and are usually best as) social activities. And, in my experience at least, hardly a game goes by in which someone (usually me!) is not stuffing his, her or their face(s). We eat it all, from Twinkies to pizza to hummus. Yes, hummus. With garlic pita chips.
And then drinks, as well. Soda, water, beer or liquor - they have all made the rounds at our games as well. Anyone who gamed with me at Historicon knows about my back pocket lubricant (rum in a flask, and yes, I shared).
Heck, there is even a 'genre' or category of games we call "beer and pretzels" games. And then you have 'theme' game snacks: port for after a colonials game, for instance, or Twinkies for a zombie game (Zombieland, of course, Rule #32, I believe...).
So what, if anything is the point of all this? Nothing really. I was just commenting on some thoughts I had about eating and gaming. And hummus and rum.
Posted by J Womack, Esq. at 1:41 PM No comments:

Has it really been two years since Hurricane Ike ripped through Galveston County like a starving great white shark through a bunch of baby seals?
The answer, of course, is "yes." Tempus fugit, as they say. Not that Ike has anything to do with the rest of this post, but still...
Speaking of tempus fugiting, I ran out of month in August for my painting projects. Not an epic fail, but certainly not a goal reached month. Call it about 70%.
And September has been very dry so far, paint and game wise. However, I am looking forward to Game Saturday this weekend, and my buddy Jim is finally coming home in two weeks after a two-year deployment! Hooray! We're already talking about getting some D&D going or something. We have decided that the boys really are not ready for a more modern, tactical type RPG like Twilight 2000. Greyson might manage it, but Dane just wants to blast stuff, and that kind of thing ends up with you making a new character every week.
Also, this month I should be receiving my copy of the new Renaissance rules from Fields of Glory (Osprey Publishing). Looking forward to that, although it means yet another project. I am torn between Thirty Years War Imperials (Catholic forces) and Gustavus Adolphus' Swedes for the first armies in that project. Can you tell I have been reading Eric Flint's 163x series of books?
Posted by J Womack, Esq. at 10:11 AM No comments:

"Conan, what is best in life?"

"To crush your enemies, see them driven before you, and hear the lamentations of their women."

"Hither came Conan, the Cimmerian, black-haired, sullen-eyed, sword in hand, a thief, a reaver, a slayer, with gigantic melancholies and gigantic mirth, to tread the jeweled thrones of the Earth under his sandalled feet."

-The Phoenix on the Sword, Robert E. Howard

Yeah, I am on something of a Conan kick. Which is odd, as I don't even play any Conan games. I think we are going to start a D&D 3.5 campaign again soon, once my buddy Jim returns home this month. Maybe I'll be a barbarian?

More importantly, what army would you use for a FOG Ancients game? One thing I always liked about Conan was that magic was one of two things: immense and all-powerful but time consuming or quick and personal, but not likely to affect a battle's outcome. This means that essentially, magic is a non-entity on the battlefield.

There is currently a Yahoo group with useable (I suppose - I have not tried them out) army lists for many Hyborean nations at: Field of Glory Fantasy. Yes, you have to join the group to look at them. But if you like them, join, download and then quit, like I plan to do. 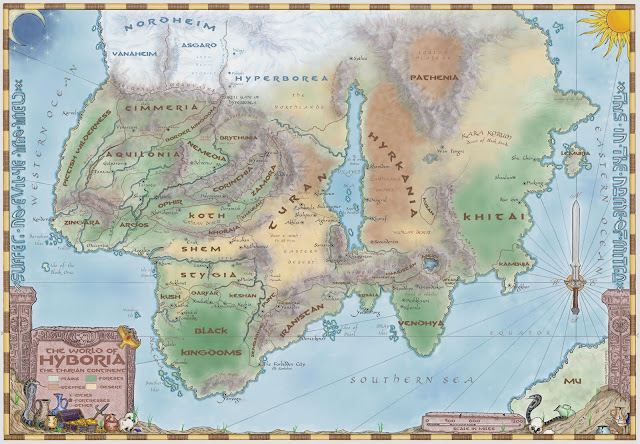