Idylls of the Rat King, Part 1

Last Friday night saw a group of six characters begin their careers as adventurers. This afternoon should see round 2 of the adventure. So I thought it a good time to discuss what's going on. The players are all freshmen and sophomores in high school (except my oldest son who graduates in a week). I'm the DM. We are playing in a world of my own creation, which I may discuss in later posts. It draws on some literary sources and several different published D&D worlds (Eberron, Dark Sun, Mystara, and Forgotten Realms), with modifications.

We had two players fail to arrive, but others picked up the slack for the night. From the great port city of Braavos, north our intrepid heroes trekked. Along the way, they discovered that petting a bee the size of a pony was not a good idea (random encounter). Their destination: the small mining village of Silverton. Their mission: recover stolen silver ore from a tribe of marauding goblins.

On arriving in Silverton, they found the local factor for the mining consortium that had hired the party. The factor informed the party that the goblin tribe in question was thought to be operating out of the long abandoned Gannu Silver Mine. The mine had been abandoned forty years ago a because of a curse unleashed at the site. "The evil" was contained after much loss of life, but the wealthy Gannu family was driven out of the village their ancestor had founded, and the mine closed by rockfalls to trap the evil forever.

Arrival at the mine was simple enough. The rogue made quick work of locating the hidden catch that opened a concealed doorway through the apparently collapsed mine entrance. So stealthy was the party that they managed to surprise some not very alert goblin guards. Dispatching the goblins with relative ease, the adventurers moved further into the dungeon.

As they approached the only door leading out of the guard room, the elf rogue had a nagging suspicion about the wall next to the doorway. His keen elf senses had noticed a secret doorway in that wall. Leaving the Custodes the paladin behind to watch the doorway into the guard room, the rest of the party followed the short tunnel to another secret door - a SECRET TUNNEL! Bursting out of the secret door, they caught another small group of goblins unawares. These guys need some ginkgo biloba or something. Anyway, the goblins dropped their dice, and reached for their crossbows. A mighty battle ensued. Well, not really. The party slaughtered these unusually brave goblins again, taking only minor wounds themselves.

After a moment's rest, the party returned to the first guard room, intent on following that door onwards. So far, they had only been enriched by a few measly copper bits. The goblin equipment was in such poor condition that there seemed no point in trying to cart it back to a town for resale, although the Sorceress did obtain additional bolts for her crossbow.

The next chamber discovered was some sort of kitchen/dining hall. The remains of the last goblin meal were scattered all over three long, low tables. The room seemed deserted, but some of the adventurers chose to examine the room more closely. The food was determined unsafe to eat, although Sol promised his patron could purify enough food and ale to supply the party a decent meal.

Our heroes split up, Scooby Doo style, and three (Custodes, Kaworu, and TSWNN) checked out an empty barracks room. Hearing noises coming from a pile of filth in the corner of the barracks, Custodes approached with caution. Two dire rats - big, nasty, all teeth and spikes and horned ridges, the size of a large dog - sprang out of the pile, jaws snapping. Custodes dropped one with a single blow. The second was sent along the path of bones moments later by two crossbow bolts.

And thus the first night of gaming ended. Major accomplishments included four small battles, a successful negotiation with their employer, and a long trek made in relative safety - except for Kaworu, who learned that petting giant bees is a bad idea, and that being poisoned is not much fun.

Treasure so far has been minimal, but there is a lot of dungeon left to explore. Now that the players are getting the hang of it, I think tonight's game will move more quickly.

Oh, to accommodate the game, I purchased a new and larger Chessex battlemat (3'x4') to replace/augment my old 2'x2' one. Amazon Prime, baby! I'll try to take pictures of the game tonight, too.
Posted by J Womack, Esq. at 10:00 AM 2 comments:

X is for Xenomorph

You know, I think it was a little silly to name an alien species this. It means "alien (foreign) form." Well, duh! But, in this case, we are discussing a very specific alien form, the one designed by H.R. Giger for the Alien film series. Large, black, skeletal, fast, smart, pitiless, with claws, harpoon tail, extending chrome teeth, a bony carapace and concentrated acid for blood, these guys are nasty! And we haven't even gone into their reproductive cycle, which involves infesting a host and then killing it at birth. They grow fast, too. Hive mind, it seems, based on Aliens (my favorite of the movies).

So yeah, these guys are great. And I know there have been several efforts to recreate them without license infringements. My personal favorites in 15mm are the ones done by Khurasan Miniatures under the Space Demon line. Not content with the classic, they have released several variants, including a queen and a giant 'troll' version. Have a few pictures...

The 'troll' - notice the scale comparison.
Oh, and there are bigger ones, too.

H.R. Giger, the Swiss artist who designed the original xenomorph for the film, died earlier this month at the age of 74. His designs continue to inspire and haunt us, and were often based on his night terrors. RIP.
Posted by J Womack, Esq. at 8:04 AM 2 comments:


O is for Ogre


You may have been laboring under the widely held delusion that Ogre Miniatures, the Steve Jackson Games product, was a 6mm scale (1/285 or 1/300) game. You would be quite mistaken, my friend.

For, you see, once upon a misty morn, many moons ago, there was a 15mm Ogre 'macroture'. Several of them, actually. They made at least the Mk. III Ogre and some Paneuropean Galahad-class GEVs. I know of at least one Mk. III still out there. I want one, really badly. If only to see the look on the other guy's face when you carefully set it on the table. Carefully, because the thing is huge. 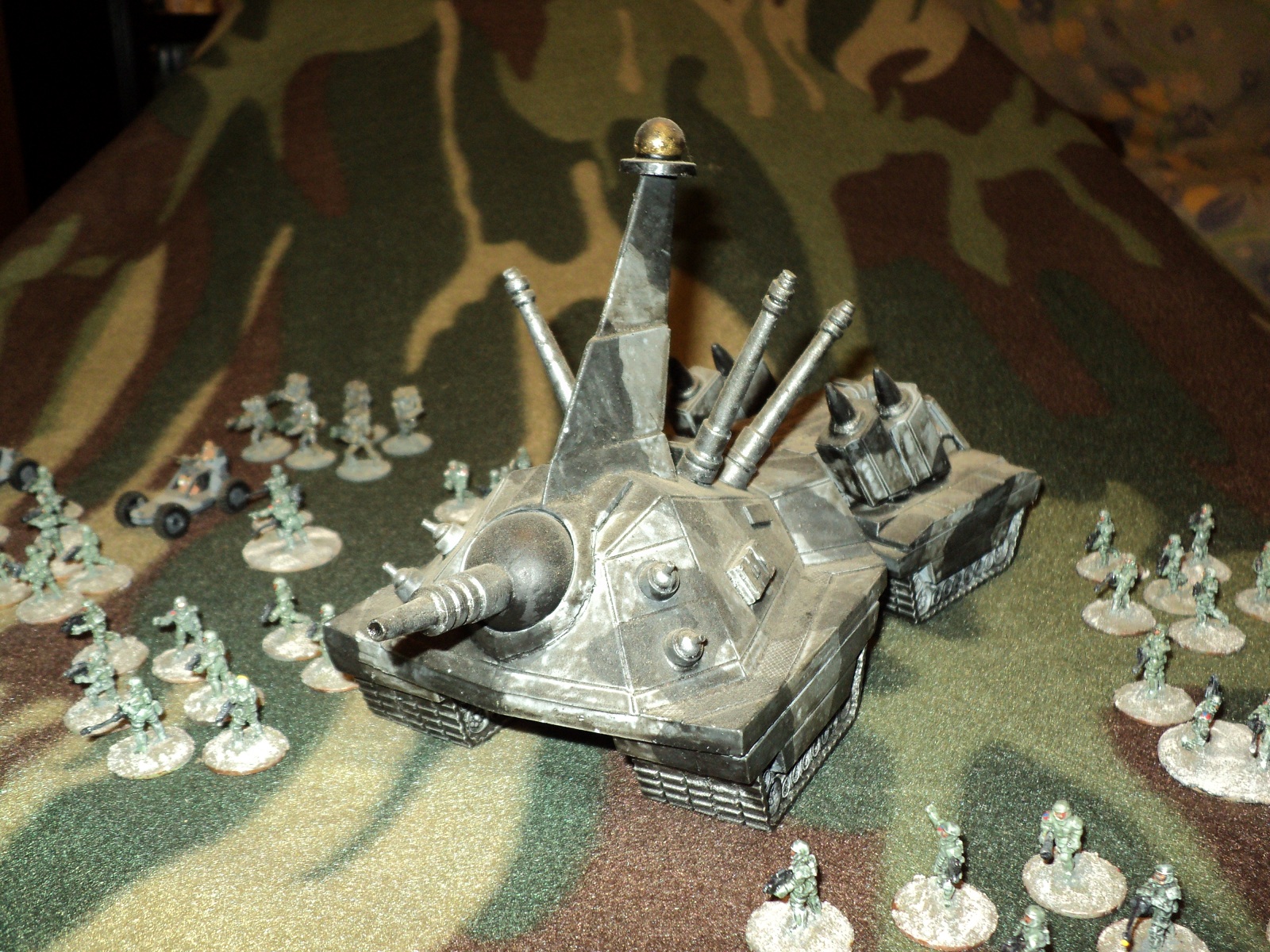 Mecha, the giant, often-bipedal high tech armored robots that many futures include as the ultimate war machine. Ever since I saw Robotech on TV as a kid, I have loved mecha. Battletech games added to the affliction. Gundam? Check! And so on, and so on...

Now then, you may say that a 30+ foot tall bipedal robot is a ridiculous war machine. And in the real world, it probably is. Sure, it's all terrain capacity would be pretty high, but that silhouette! Since modern battlefields rely on evasion to protect from airstrikes, etc., how on Earth (or Mars, or Terra Nova, or where ever) do you expect this thing to survive?

Shogun Warriors Toys: I had this one.

Battletech is probably the biggest of the mecha games out there, so let me delve very briefly into non-15mm scale sci-fi. Personally, I like the old Robotech models best, what are called "Unseen" now. Here's a few from my own collection. 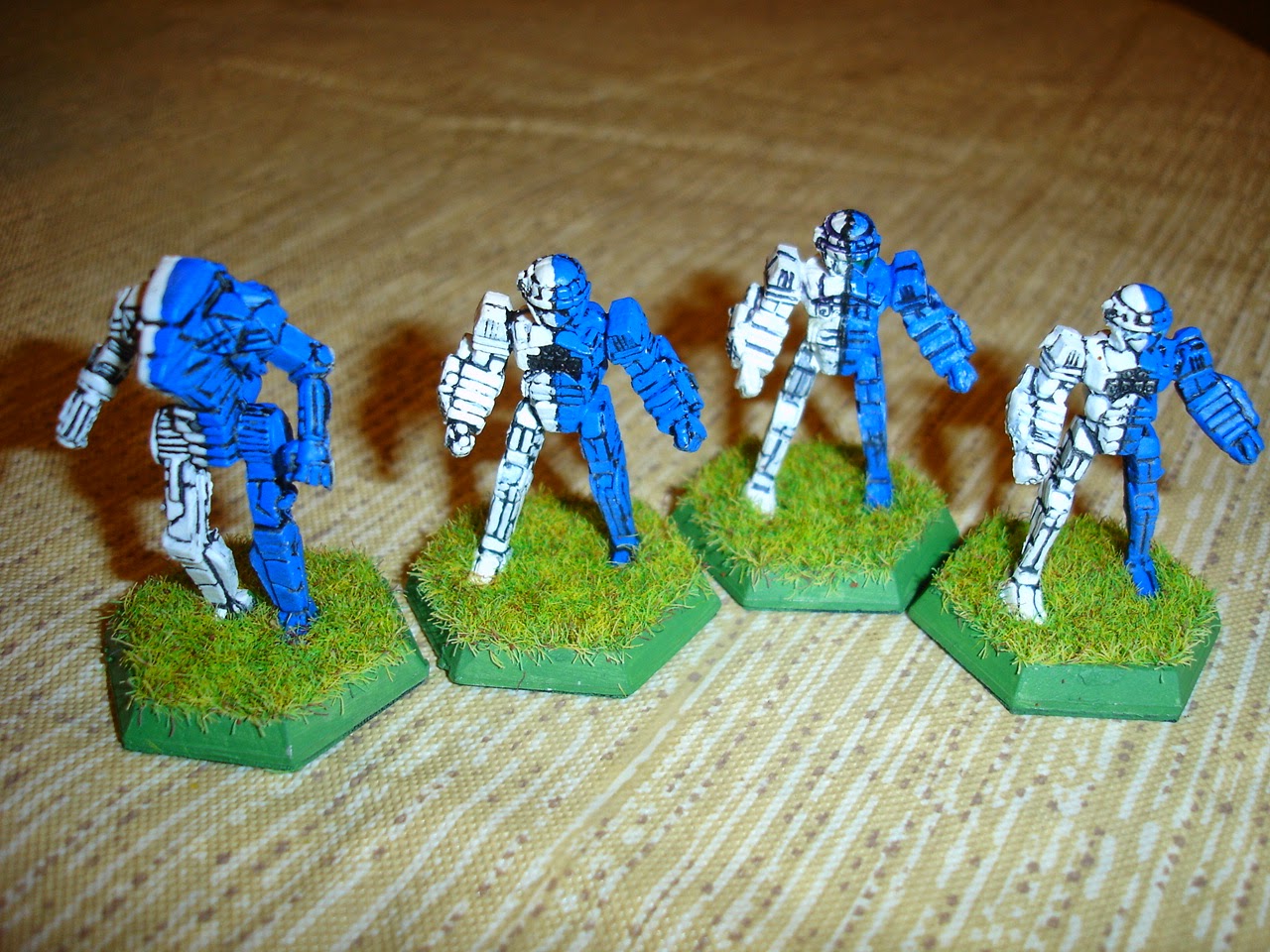 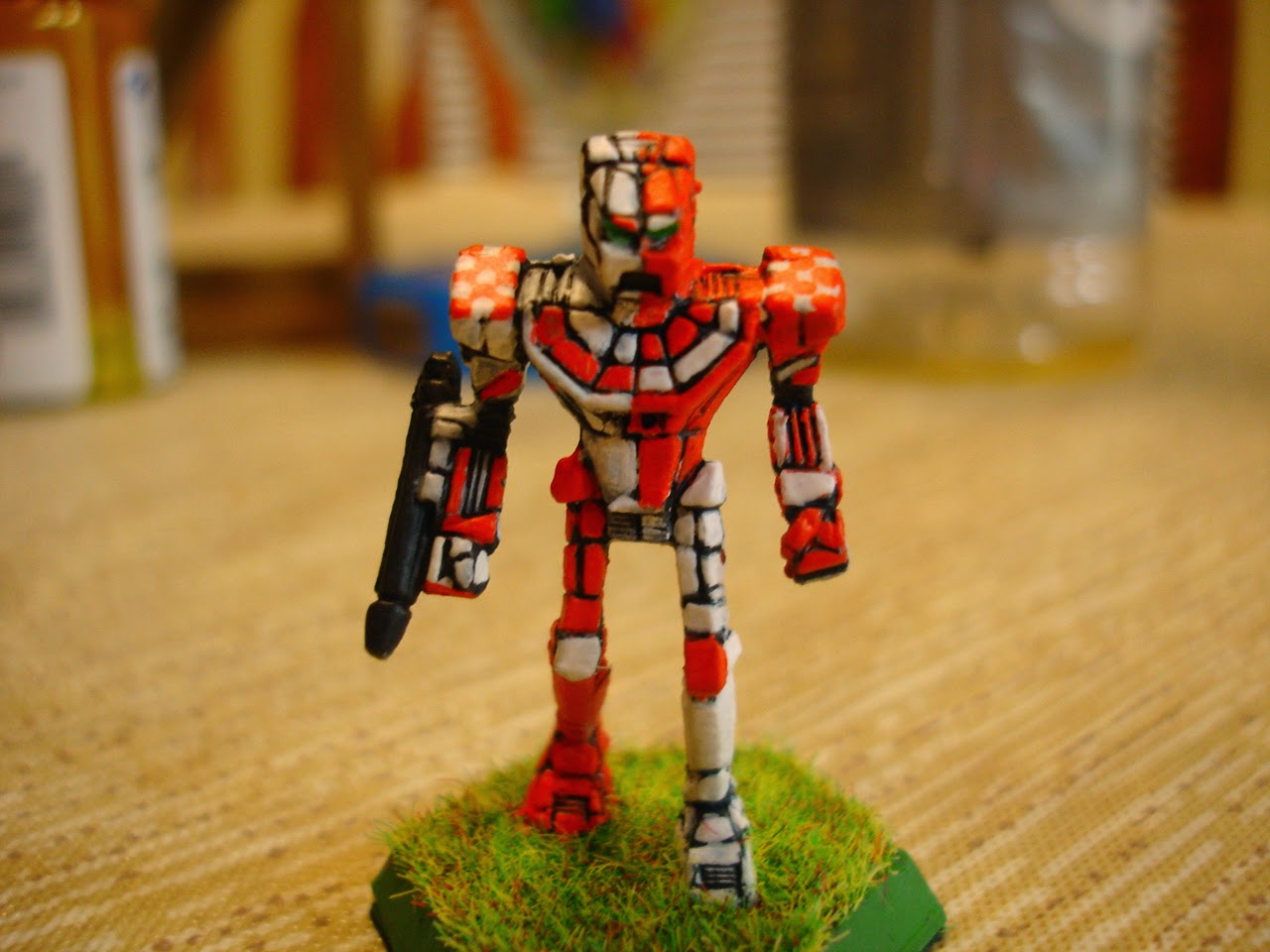 Another game that used giant mecha was Games Workshop's Epic system, including Adeptus Titanicus. Besides the various Titans (Imperator, Warlord, Reaver and Warhound) they also had a smaller mecha series, the Knights. Recently - in March 2014, I believe - Games Workshop released a Knight in 28mm scale for their Warhammer 40K game. It's big, it's expensive, and it is truly cool.

A tale of Woe, in Rounds Four through Eight...


So, as it stands on the brink of the end of Round 9, I am in 35th place out of 40. This is, you can imagine, quite a blow to my painting ego. To be honest, some of the rounds I knew that I was up against a better painter, and it didn't bother me to lose those rounds. However, some of the rounds I think I am a better painter than the winner, but that the winner did a better job of "telling a story" with their photo. Not happy about losing those rounds.

My record right now, is 2 wins, 7 losses. I expect to lose Round 10, as I have not had a chance to paint anything new, and I shan't be getting any bonus points (for theme, new team, or big thing). I expect to drop down to about 37 or 38 in the contest. I am honestly bothered by that performance. More crushed than inspired, to be truthful. So I guess I learned something about myself and my painting skills (or apparent lack thereof).

At any rate, here are the entries for Rounds 4 through 7. I repeated Round 7 in Round 8, again, having had no time to prep something new that week either. 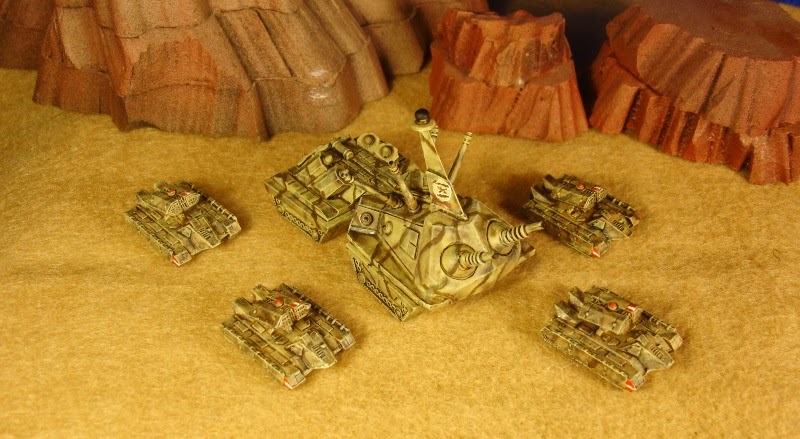 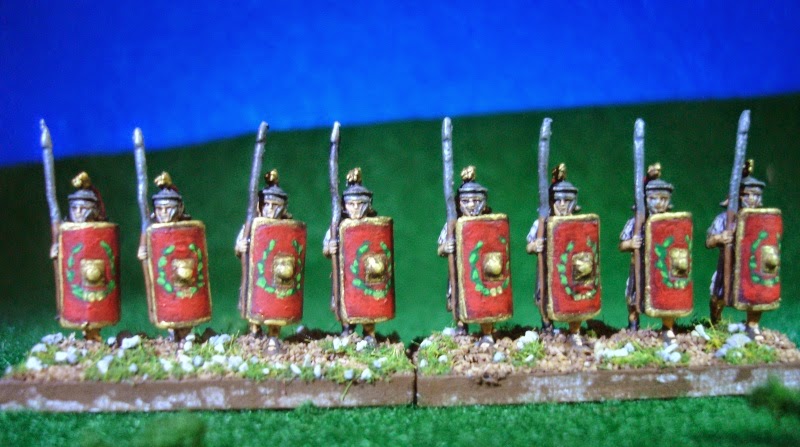 Those shields are not transfers, by the way. I hand painted those laurels.
Still lost the round. "Maton's Mannikins" - Round 6
Lost.
Positioned them to show more than one aspect of the figure. Maybe because it was a single pose?

"Werewolves of London" - Round 7 and 8
Lost both.
Not a great photo, to be honest. Lighting problems.