From the halls of Montezuma...

I spent a couple of hours on Wednesday prepping a lot of 15mm WW2 US Marines. The figures are from Peter Pig, and are destined to be the core of a Marine Rifle Company in Flames of War - Pacific. 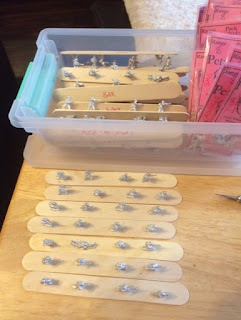 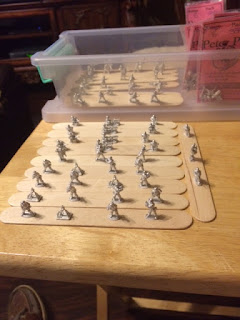 A selection of Marines, ready to charge to the spray booth.

So far, I have trimmed up and de-flashed (not that there was much of that) and glued them to 'jumbo craft sticks,' aka tongue depressors. Each stick is a mix of figures that will make up an individual base or team, if you prefer. I've done enough to make:


If my math is right, that's about 158 figures on 43 tongue depressors. It nets out to two infantry platoons, two mortar platoons, a HMG platoon, and a scout platoon. I will still need a few things to finish off the force, like some more LVTs, some war dogs, and the Marine Engineer Assault Section.

This may be what made me decide to collect a USMC force.
War dogs! 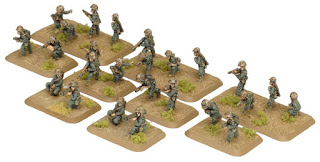 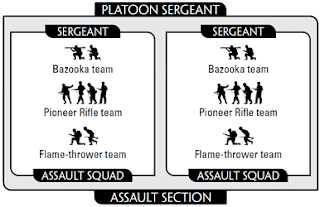 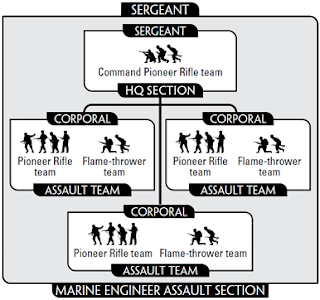 Images from Battlefront and the Flames of War website.

Next step is priming. I have an ultra flat olive drab spray that I am thinking would work as a base. It would speed up the painting process, maybe, since these Marines are all in the old pickle suits. I'm going to try it on a couple of 'extra' figures and see how it works before I commit to the whole company.
Posted by J Womack, Esq. at 9:42 AM

Very nice those peter pig marines. I'm getting a British para force together and need to prep them shortly. The Dennison smocks should be a challenge!
Looking forward to seeing these painted up.