Okay, these huts are just becoming available, although they have been discussed on The Miniatures Page (TMP) for over a year.
The sculptor (whose name I can't recall off the top of my head, but who goes by the TMP handle of Cacique Caribe, or CC) finished them, oh, November of 2007 I think. Then he shopped around for someone to handle the casting and marketing and such for him, as he didn't really want to do all of that himself, but there was a lot of interest in the models.
Enter Alex Bates in Alaska, of the new Forge of Ice company. They get a deal worked out, and now, they are in production.
First, a group shot. There are four different designs: 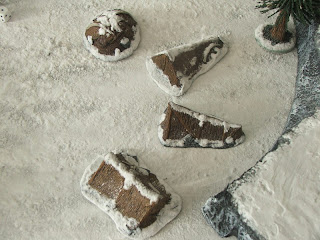 Now a close up of one: 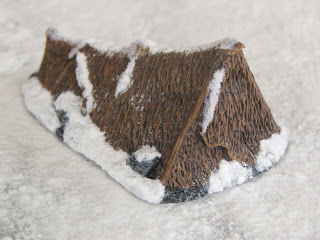 I have nothing to do with the paint jobs (nice work, though, especially the snow) which were done I believe by a Mr Robert Phipps of the United Kingdom, a customer of Forge of Ice and friend of Alex's. I hope no one minds me swiping the photos, but I'll remove if you want me to!

I pinched this tidbit regarding the snow effect from TMP (http://theminiaturespage.com/)

I Just use a bit of PVA wood glue on the bits I wanted covered in snow, then used a white flock, then another coat of PVA and then Bicarbonate of Soda for the snow effect. You get a nice brilliant crisp white from it.You don't have to use a white flock underneath but it stops any colour from the tent from showing through if your PVA is too thin.
And that's how he does it!

The reviews have been most complimentary, for both sculpting and quality of the production castings. You can reach Alex through his blog, and here's a link with more info and pictures of the tents. http://forum54.oli.us/index.php?topic=5205.15

The sculptor is Dan Martinez, and you're correct, he goes by Cacique Caribe over at TMP.

I thought it was Dan something, but I couldn't remember. thanks for letting us know, Alex.